I have an 18 month old XS- 2 that has developed a hum when the volume is turned up. When muted it goes. I have disconnected the whole of the system, then put it all back together again, being as careful as I can when putting back the cabling etc., but the hum is still there increasing in volume when the volume is increased.
Has anybody an idea what may be wrong, I fear that it needs to be returned for investigation, that of course will have to wait whilst the lockdown is ongoing.

What is connected to the Nait ?

Two cd players, when they are turned off the hum is still there.

Disconnect one of them. Still got a hum ?

I suspect you have a ground loop…

Teach it the words so that at higher volumes it’ll have confidence to sing rather than just humming!

But James is right to ask about items plugged in.

The other possibility is that neither CD player has a ground reference and the whole system is floating - in which case you’ll need to arrange a ground link to one of the inputs. Which type of mains cables do the CD players have 3 core or 2 core?

You could be right there Xanthe - looking at some of the older posts, the OP looks to have an Audiolab and Rega CD players and i don’t think these have an earth connection.

Well I have just unplugged one cd - no hum, then plugged it back in - no hum. So being electrically ignorant, what is a ground loop?

I have two Audiolab cd players.

So the hum has now gone ?

Yes it has, but still unclear about a ground loop. All h ifi items are plugged into a block.

You can get a hum from ground connections (or lack thereof) in two ways:

2 Lack of a ground reference - simplified explanation
If an amplifier doesn’t have any ground reference, then the leakage currents will cause the signal reference to float up and down at mains frequency (albeit at much lower voltage), however as the inputs (particularly line level signal cables) are slightly influenced by everything around them this floating up and down can also appear as a small mains frequency signal at the input of the amplifier.

Moral of this:
Ensure that the signal reference line (0v, pin 3 of DIN connectors and the shell of phonos) has one connection to the mains earth and one connection only.

That’s fine I think I understand that but I am more likely to think that the unit is faulty. The cd player is recently purchased and I have used 3 others , often 2 together and not had that problem before.

It depends what players you had - if you had a Naim CD player before then that would have provided a signal earth to mains earth connection. From what you say and from Xanthe’s email above you may have the signal earth floating as these other players may not provide that connection. This could easily give you the problems you describe rather than something being faulty.

To test this out, you could add a ground wire from the ground terminal on the back of the XS2 to a mains plug earth terminal and plug that into your mains block - see pics below. 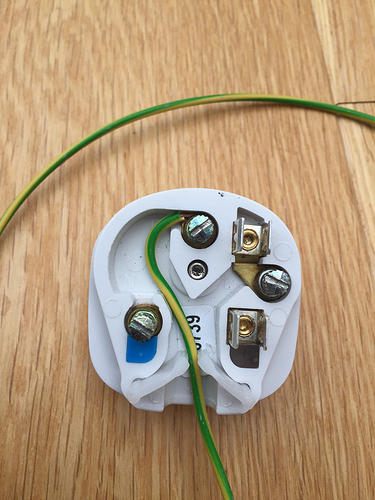 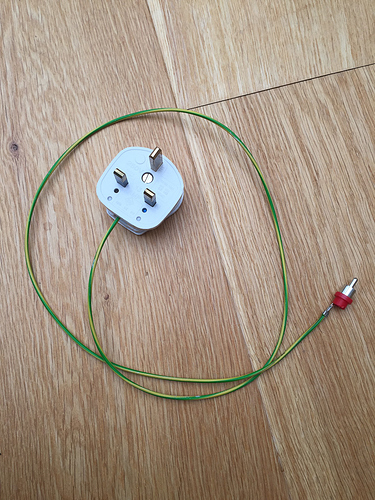 It’s highly unlikely to be faulty. You either need to earth the chassis as explained, or just use one CD player at a time.

It’s the signal earth that is the issue here, not the mains earth. Naim CD players have a signal earth whereas their tuners have a floating earth. That means that with a Naim CD and a tuner there is only one signal earth and thus no hum. Maybe you could swap the two Audiolabs for one Naim…

Nice answer, I had a Naim cd player for 8 years during which time it was returned for repairs four times. To me expensive equipment should be reliable, but this wasn’t so in the end I decided to change. I have had with an Audiolab cd both a Rega and a Marantz connected at some stage but only now has this issue occurred.
So there we have it.

Thanks for the illustration.

Hi, I thought I understood is, but the the Naim mains lead is earthed. Or are you saying I should take a plug, put a wire tohe earthterminal in that and connect to the Naim amp, then the humming will go?

The Naim mains lead is earthed - it provides a safety earth connection to the case. What I’m suggesting is adding an additional earth wire which will provide a connection between signal ground (from the ground terminal on the back of the Nait) to mains earth via the earth pin of a mains plug.

To James_n and Xanthe, Thanks for the explanation and diagrams given yesterday. I tried the remedy and it worked.
However it was the final brick in the wall for me and Naim, I am going to change amps and will sell the Xs-2. There is too much going on with the stuff and my experience with Naim makes me worry about reliability, things go wrong more than perhaps they should , so at my age I give up, it’s not for me anymore.
Thanks again.

…good luck Charles, I loved my Nait XS 2 and do hope you find something that works flawlessly for you!