never assume. I mean what I write.

To be honest I’m not familiar enough with the Naim product numbers. I just thought it was shorthand for 282… I never knew there was an 82. It makes sense now though. Most of the time I have to search up the price of a recommendation, then proceed to almost fall off my chair at the eye watering sum. I haven’t really even looked at anything above the 202/200 as it is well out of reach.

Glad it works for you Stephen. There’s also the room characteristics. You can’t choose all types of speakers probably.
But there is no reason to not find better mini monitors than the N sat , which will sound better. But they will probably not have the Naim sound you enjoy actually.

There are 30k systems on here with 2k speakers…. That’s insane…

Not insane and your rule to challenge… many, included myself have experienced great result where prices do not match “ideal world”

Sorry if I have offended you. I am Just stating my opinion. What you do with your money is your choice. You should be confident with your choice as I am, in spite of others opinions. There are many posters that don’t hesitate to tell someone that there system of not enough for their speakers. That is just the same.

I’m not sure it really is the same. Trying to be helpful by suggesting a better match is one thing, calling people’s choices insane is downright rude.

That’s rich coming from you.

I wouldn’t agree that something like a Nova and Kanta 2 is balanced, regardless of Naim’s recommendation and I think people can build a better system with a better balance of resources. They can take that on board or ignore it as they wish, but I wouldn’t dismiss them as insane for not agreeing with me. There is a guy on the Forum with £45,000 of electronics and £1,500 speakers. Is he insane? I have a £12,000 source and £1,500 speakers. Am I insane? I can be brusque at times but hopefully never insulting. Anyway, I’ve made my point and you can reject it if you wish.

Ok, lets be logical about this… Do you think that the 45,000 system is capable of greater performance than what a 1,500 pair of speakers can deliver?

You may not want to respond and thats fine. I suppose my point is that a 45,000 system can drive really big and very expensive speakers producing low frequencies down to 25hz most likely. This makes a huge difference to music and makes it sound real and close to the live event. This is what i look for in a system. Instruments that sound real. No small box does that. It sounds good, but instruments don’t have the low frequency back up to create a convincing representation.

If you placed the expensive system with the 1,500 speakers next to the same one, but with large speakers the difference would be phenomenal. A lesser priced system with the same large speakers would bring me greater satisfaction than the smaller ones. That is my opinion and point. You don’t have to agree. In reality though, the optimal system for those smaller speakers was long ago in the hierarchy. My point is that those small speakers simply can’t reproduce the audible value of a 45,000 system. For a start it is missing half of the frequency response.

For the record, i wasn’t calling the person insane but referring to the situation.

Some may say my speaker/system balance is also insane. I would absolutely agree. However, this was done with my entire life of upgrades taken into account. It is hard work building a pair of speakers like that and i don’t want to do it again and again as the system improves. So i built speakers that are an easy load with active bass drivers enabling me to have adequately driven low frequencies and a mid range section that can be driven well from smaller wattage amps.

Sorry if i have ruffled some feathers. I do not want to offend anyone. I just sometimes want people to know that an unbalanced system can absolutely still be enjoyed as much as a balanced one. As we see with the both of the examples. But that doesn’t stop them being ‘insanely’ unbalanced.

Source first is something that Julian and Ivor observed a long time ago. It’s as true today as it was then and in my experience is unbreakable. However, there are lots of other factors to consider, like those you raise. Sometimes folks think these factors in some way invalidate source first, but they don’t. There are just times when you may decide not to follow source first very far, or at all, but it’s always there, always at work in any system. Its up to each of us to find what works best for us within the funds available, and understanding source first will greatly help achieve that goal.

Absolutely. To have a speaker that is capable of faithfully reproducing that source is another thing entirely. This i have heard and it is what i strive to achieve.

Yes, source first is only related musical communication, not the HiFi stuff like transparency, sound staging, dynamics, etc. The HiFi stuff may be better in the option that is more source first biased, but equally, they may not.

Transparency and dynamics are vital to my sense of enjoyment these days. If i hook up my 5" scan speak bookshelf speakers to my Atom, the dynamics and transparency seem to disappear in comparison. They also sound rather congested when the volume goes up. This would no doubt change with a really expensive front end. For me, and my situation, high quality speakers have become an essential part of the chain highlighting that you can get much more from your chosen source by improving the passage and impact that the signal has in that final stage.

I think the flat earthers in the 1980s didn’t help themselves by ignoring people like yourself. And both Linn and Naim have distanced themselves from those hardcore views over the decades. It’s no good choosing the system that leans more heavily on source first if there is something that consistently blocks, or gets in the way of, your musical enjoyment, but I suspect that was often lost back then and you would have been told you had made the ‘wrong’ decision.

I wish I could demonstrate this track played on my system really loud. I think anyone would be surprised what the Atom is capable of as a source. The dynamics are immense and the kick drums sound real. It never sounds messy or disorganised. I do have 250 watts driving 12” bass drivers but still the atom is the heart. With my bookshelf speakers it looses its life and realism.
Try this track on your system. Make sure it’s the live version with the amazing emotional vocals at the beginning. Stunning. 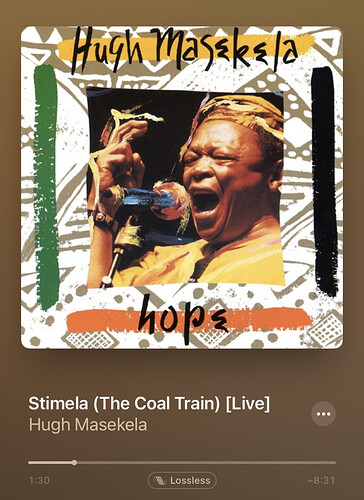 Thanks for understanding my point of view. Even when it may not be wholly your own. I Appreciate that.