The one cable dressing area I struggle with is my NAP300 Burndies. The PS and HU are both on the base level of their respective racks. The Burndies are therefore both on the floor and supported by pipe insulation but I’m trying to work out if there’s anything I could do (short of adding other Fraim levels on each stack) to make the best of the dressing.

Interested to hear of other experiences / thoughts on this as I suspect it’s a relatively common situation.

Dave you could put the NDS PS at the bottom of the brawn and move the 300PS up one. That might give more clearance.

Thanks Phil. Unfortunately not possible as that would mean SCDR on top and, with 300HU on the bottom the din to XLRs will not reach.

I run a 500, which is on the bottom and initially had its ps on the bottom of the adjacent Fraim but was disappointed with it compared to a 250, I moved its ps up to the 4th shelf and this was better but still not right until I moved the 552 higher on the brain stack than the 500ps was on the brawn. I now have from the bottom, supercap, 552ps, 555ps and 500ps on the right and 500, ND555, superline and 552 on the left. I’ve experimented extensively with ps order and this works best for me. I’ve not tried the 500 head unit higher nor extra levels between the boxes. The Burndys all clear each other despite crossing as they stick out different amounts, one 500 one does touch the carpet but it’s not exactly resting on it.

Thanks Yeti. I could think about swapping the SCDR and the 300PS so that SCDR is on the bottom and 300PS is on the middle shelf of the brawn. The XLR leads would still reach and I think the Burndy and snaic for the 252 (on top of the brain) would reach the base level on the brawn stack. It just depends on whether that would get the 300 Burndies off the carpet or not.

Hi Dave, Maybe you don’t have SL, which do reach. DB recommended SuperCap on top.

I don’t understand as mine do with brawn right and brain left. 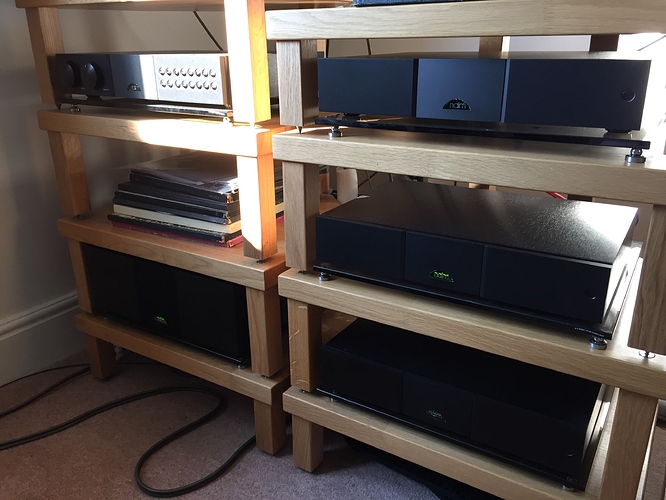 Maybe yours are the 1.5m lengths?

They are 1m having just put a meter rule along the back.

Though I now run 500 Amps I used to run 300 Amps for many years and played with these on cable-dressing and positioning. Both HU and PS on lowest Fraim base-levels did not sound good whatever I did - the Burndy o the floor is a killer to the SQ and music no matter what you place under them to isolate from direct floor contact - I could always hear it and it deadened the sound.

I first borrowed from the Dealer - then purchased another standard level of Fraim so I could lift either PS or HU box and prevent the Burndy on the floor and either way you lift the box the outlay for the extra level paid for itself in performance lift.

I then tried PS up a level or HU up a level, each with an empty shelf under where it was up a level:
The best musical performance was with the HU up and off the ground more - a more open clear sound with better timing on bass - clearly obvious in my system and wherever I did this in other systems.
Each extra level seems to provide an additional level of decoupling and the Amp HU seems to benefit having that extra level, whereas the PS box is less fussy.

…then there is the whole discovery of keeping either 500PS or previously 300PS away from other PS boxes. The HU box can be close to other low-level boxes without transformers as it seems fairly benign, whereas the PS box is not - probably why Naim put it in another box that can be put farther away.

Fraim is a puzzle we try to solve within the constraints of room space, financial outlay and ergonomics (in that order for me) so I sympathise and wish you success!

The recommendation I got here from Peter, and that I use successfully at home, as the 300 amp on the bottom level of the Brain stack, and the 300PS near the top of the Brawn stack. No Burndies touch the floor.

This configuration will also risk having the NDS Burndies potentially touching the carpet but, unless I order two additional Fraim shelves to have empty then I guess there will always be some compromise with cable dressing and it’s then a case of working out which is less problematic.

It is always a bit of compromise with the Fraim puzzle. Some Burndies stick-out more and will allow crossing without touching, but sometimes you just have to bend them to get the best you can with what is there.

Also worth moving the Fraim stacks apart a bit more sometimes to get any cables off-floor - one of my 500 Burndies is mm from the floor by that approach and just clears it and sounds fine - when it touched floor the bass went fat and full-blown and I lost timing in bass.

The test is when you give the Burndy cabe a little poke it wobbles and settles over a few cycles and then you know it is free. If it is stiff you are not yet getting the best I find, but sometimes you have to just arrange it as best you can and listen - if it satisfies then it is done!

I’ve occasionally wondered what the reason for keeping them off the floor is? How would a wool carpet and pipe insulation do if barely touching?

Yes some crossing is inevitable. I have an ND555 and 555PS as well, and so the Burndies have to cross. But they actually don’t touch each other behind there.

I don’t pay a LOT of attention to such things, and haven’t the ear, motivation and/or something else to worry about it much. But that’s me.

I don’t believe that having my NAP 300 cables resting on the floor makes any difference to the sound.

Is that because you’ve tried it or the reason you haven’t?

I must say I’m inclined to agree but there are plenty here who insist that it does. I may be moved to find out over the next few days.

I have had my NAP300 and PS on various racks, in various rooms, on the floor and elevated, carefully and carelessly dressed. In fact, I have just tried shaking the burndies while playing music, and find it makes no difference at all.