After years of sometimes working and sometimes not, the power switch button on the 500 PS has given up on me. It now stays on all the time and will not switch off any longer.

I have just spent a small fortune (for me at least) on purchasing the NDX 2, I cannot afford to spend more on the PS to have it serviced.

As I keep the system on all the time, I guess it can stay that way for years to come. has anyone had a similar experience?

I am wondering if I could replace the switch myself (I f I could get the original part). After all, my system can now be considered vintage, having had it for over 15 years.

I wonder if the dealer you bought the ndx2 could replace it………I know my dealer would if the ps did not need a service?

Unfortunately, he is only a reseller!

This sounds like something that a good Naim dealer could fix for the OP.

Are you UK based? If so, maybe give Darran at Class A in Sheffield a call. His rates are very reasonable.

No, I now live in Rome, although the Nap was purchased in the UK at the time

Mine does the same thing. I’m just leaving it on. I don’t want to pack it up and be without music while it gets fixed. It’s just too big of an aggravation to get it fixed. I’m in the USA and have to deal with thunderstorms so I just use the power cord to unplug it when I’m forced to.

I agree, don’t like the time spent without my music!

This thread might give you some idea of what’s involved:

I bought this 500 unit new in 2016 or so. Show demo I think. I had taken it down with the rest of my system for a home renovation. I set it up a month ago with no issues. Sounds great. It is storm season now in the South and today I needed to turn it off ahead of a thunderstorm. I could not turn it off. The button on the PS would not come out of the on position. Any ideas? Long way from the dealer. @Richard.Dane

This is great Chris, thanks a lot. It seems a relatively easy thing to do to resolve the issue. Even more so, realizing is really not something serious.

How old is your 500? My 23+ 555ps did the same thing. But once I tried to push it in a bit more and “sway” the button gently then the switch came back. Maybe just give it a try without plug in the power cord. Hope this helps.

I realized the hand-feeling of switching on/off of newer amps is different from the ones which were built longer time ago.

The German distributor serviced and recapped all my stuff in 2021 including new power switches for all PS’es. I assume new fuses. The CDS3 had to be sent back to the UK

How much did you spend for the CDS3 service?

It was quite reasonable (€300 or so) but then again there was only a DAC that was replaced. Transport which is the original VAM1250 was deemed to be fine so not changed. Unit checked over and sent back. It did take a while, about 2 months or so and probably would have been faster if it wasn’t due to the great deal

, but happy with the result nonetheless

I had the opposite problem of the switch not latching on, so you power up and then it immediately goes off and eventually you begin to blow fuses trying to get it to latch and no music.

My Dealer just swapped the switch for free - it took about 20 mins. Doing this yourself would need to get the replacement switch type which should be inexpensive and an ability to solder - or access to someone that is experienced with that.

Thanks for this. Well, in the event of substituting the switch, I can manage the soldering. The problem now is how to get the replacement part. I guess Richard could give me an input?

I had the same problem twice. You may actually not need a new replacement switch soldered, although I got one i still have it in the drawer. Sometimes the switch may get stuck and just by taking off and refitting the bracket that holds it will loosen the toggle mechanism. First time I did it together with my dealer, second time by myself. 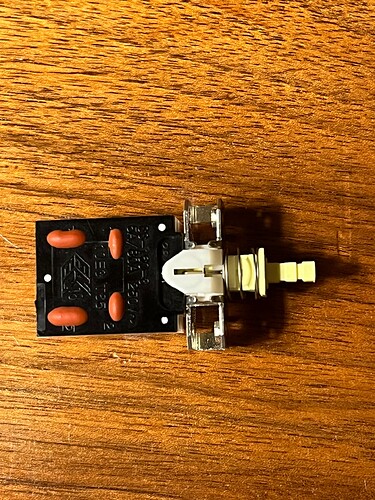 I will try tomorrow to disengage it first, then will see.

I had the issue with my 300PS, XPS2 and Hicap2 from 2004
The new switches fitted by the German distributor in 2021 are firmer than the old switches. The symptom was that the switch did not latch when powering on and when powering off sometimes did not deactivate or cut the power.
Phone the naim distributor in your country or in Germany, I’m sure they can help you