This question was asked before but one item was not addressed. It was stated that a DR-upgraded 250 would be identical to a new 250DR. However, no mention was made of a transformer upgrade - the original was spec’d at 350VA while the current version is spec’d at 400VA. Is an upgraded transformer included in the DR upgrade?

The NAP250 has used a 500VA transformer since the mid 80s AFAIK. Incidentally, the 250 has always used ‘discrete regulation’, albeit not as fancy as the ‘DR’ version.

Maybe someone from NAIM can clarify?

500va transformer. 400watts is merely the max transient output to speakers. You can see on the back of the box the unit may consume 480va.

Yes, the DR is a bit more gutsy with a higher power rating (measured, not published), but that isn’t acheived with any transformer change.

The transformer is essentially the same between the NAP250.2 and the current NAP250DR. Only change came with the introduction of ROHS where certain hazardous materials used were banned (this saw to move to lead-free solder).

FWIW the transformer in the original NAP250 was rated up to 400VA. Then with the introduction of the NAP135 the same rated transformer was used (500VA).

I believe the 400VA in the specs relates to transient power output rather than the rating of the transformer itself.

Wow, OK, thanks for that clarification. I’m getting my NAP250 upgraded to DR so just wanted to understand the subtleties!

Judging by the serial no. (372075) it’s a 2014 build, whereas the nap250 DR model was introduced in 2015 I believe. The DR logo/badge is placed (unusually) away from the identification panel, which seems to be the normal placing. 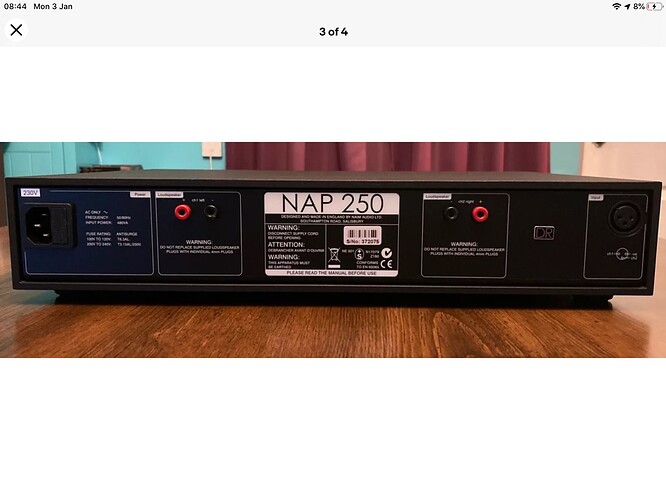 The separate DR badge would appear to indicate that it was a NAP250.2 that was later upgraded to DR spec. A check of the serial number with Naim (or local distributor) should give the details here.