After having added a nac 282 to my system ( and enjoying it very much), I am now looking at the power amp side. Having red at the forum on many occasions that a nap 300 is preferable to a nap 250dr, I recently saw a pre-loved nap 300 being offered on a trading platform. However the indications/stickers on the back of the unit (indicated to be from 2014) seem to have completely yellowed out. Is this a sign that the unit has been mistreated or something that would occur normally when the nap ages?

I’ve just had a look at it, just the head unit. Weird, the chap reckons both head and psu have been in the same room. Doesn’t look sinister to me though. The serial number sticker is still white. 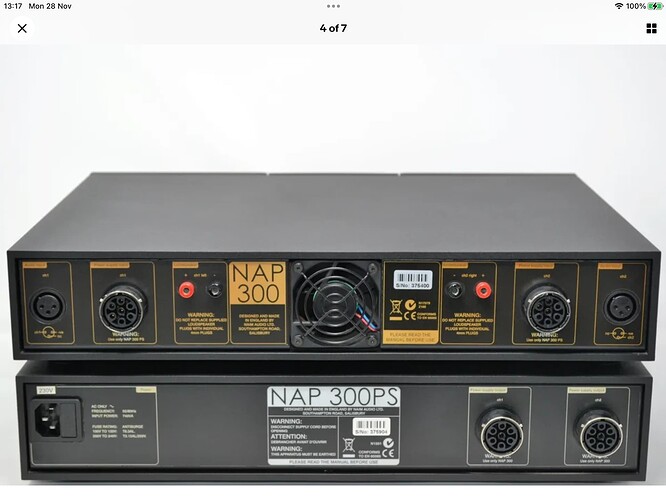 I’ve never seen that before. I wonder whether @NeilS has seen anything similar.

It’s odd that one has bronzed but the other hasn’t. It reminds me of the silver on the CB fascias when they switched to polycarbonate around 1985 which similarly would bronze over time.

I’d treat the state of stickers as a prompt for a query rather than a red flag myself.

It is also worth noting that non-DR amps can no longer get the DR treatment from Naim. This seems to be increasing demand and prices for the DR amps ,and doing the opposite for the non-DRs, as you might expect.

Boxes more than about 12 years old probably also need a service too - stil available but more expensive than it was and worth factoring in to your thinking.

FWIW, I used a 250 for nearly 30 years, but finally got a 300DR this year, having never seen convinced by the non-DR 300. I didn’t do it until I had upgraded sources and preamp (and its PS). Getting a s/h 250 and spending the saving (versus 300) elsewhere in your system might be worth considering.

I’ve never seen that before.
It’s odd that one has bronzed but the other hasn’t.

My only thought is that maybe the 300PS was at the bottom of a rack and the NAP300 was much higher up and was affected by… something…?

It is possible that the orange colour suggests something non-standard about the box, and perhaps even that that serial number does not belong on that box. It would be worth asking about that even if you do decide you want a 300.

Looking closely at the picture, I see that the writing below both of Burndy connections on the NAP looks to be white…? Is it just a strange effect in the photo, maybe due to artificial light…?

Modern LED based lighting can do very odd things…

(The Serial numbers of the 2 units are quite close - as expected.)

Looking closely at the picture, I see that the writing below both of Burndy connections on the NAP looks to be white…?

I noticed this as well, my thought would be from UV/sun, when the Burndy’s were attached they probably helped block this area from the sun so no colour change, like the rest of the rear. Looks like the colour change might be slightly less under the XLR’s as well. My guess would be like mentioned above, probably sitting at different levels/side of the rack where one was exposed to more sun then the other.

I don’t think the yellowing is due to age, I’m thinking its a UV issue.

It is also worth noting that non-DR amps can no longer get the DR treatment from Naim. This seems to be increasing demand and prices for the DR amps ,and doing the opposite for the non-DRs, as you might expect.

Exactly why some of us only buy used Naim equipment. Just picked up a 2015 NDS and recently serviced XPS2 for £3k. Who would have thought that a year ago? The prices will probably bottom out a bit more I think but I won’t lose much if I sell up in a few years.

Thanks for all your contributions. I just sent out an email to inquire. If I receive a response, I will let you know. As this would be an international purchase for me, I would like to be completely comfortable with the offer, which is currently not (yet) the case.

I have had this happen to a couple of my boxes. The back of the system used to face a window and, as others have surmised, the stickers that were exposed to the setting sun, late in the day, have gone a similar colour.

The writing below the Burndy connection looks to be yellowing at the edges…UV/strong sunlight I reckon, with the Burndy itself providing some shade as you say.

I would put it down to a muppet with a cleaning product.

I just received a reply from seller. She claims the nap300 had the yellowed stickers from when it was bought, and it would have been bought new. Although, thanks to the joint knowledge in this great community, I think we found the cause, I do not understand how this could have been the case from new on. The - now theoretical - the next step would have been to check if the unit could still have been Dr’ed, as in my country there would still be some last dr sets available ( although not sure if this also applies to the nap 300). Thanks also to the thoughts of NickofWimbledon. I think you are right to look at source and pre first, but if you are dependant on the second hand market, the opportunities do not always come in the right order. So I try to keep my end config in sight and fill in the gaps as the become available.

I wouldn’t be too concerned, know many have paired the 300 with a 282 & believe it to be an excellent upgrade.

The pigmentation reaction on the stickers are trivial, no big drama, and Naim equipment pre DR performed really well, if this 300 is near you and well priced I think you will be highly pleased. The dr (or not) and yellowed stickers wouldn’t put me off

He says it’s an “international purchase” so not that near him!