All I know is that say broadcasting from the North Sea… which is not really Orford Ness… if they said broadcasting from the Suffolk Coast that would fit… but I don’t know for sure. The wiki says in 2017 they had a MW community licence for Suffolk and North Essex from Orfordness …so they may still be using…
Those antennas are somewhat of an overkill for a regional radio station…

… but yes the Ness is a land spit off the coast… and yes fairly remote … after all that is where the British developed their atomic bomb detonation systems.

In case you haven’t seen, an interesting read 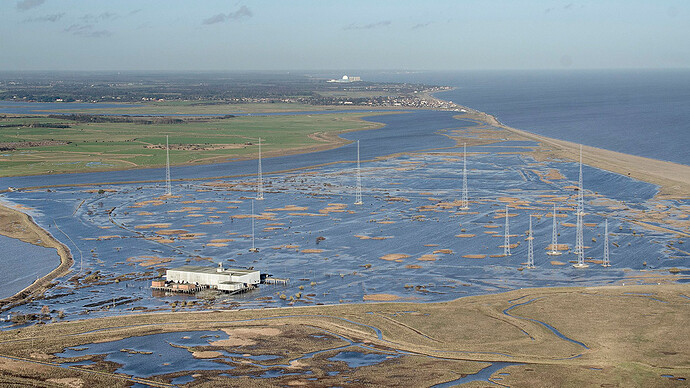 Thanks Mike, and a good picture of the northern tip of the Ness which I think is National Trust owned now … and a RSPB sanctuary. You can see the gigantic reactor dome (white sphere) of Sizewell B nuclear power station to the north of the picture beyond Aldeburgh looming into the Suffolk Skyline.

g’mornin’ Simon.
I know the area very well, we go to RSPB Minsmere & nearby birding spots on a regular basis, normally twice a year.
Not been over to the island, Havergate as its known in RSPB. but must do sometime. Might plan that for next spring, stop for a night in Orford, over dose on crab & Adnams sounds good.

If you are end up near Orford (and yes as you know I am sure that is where you catch the ferry to the ness, although in theory you could do a long walk down the spit from Aldeburgh, and yes then there is the tiny river island called Havergate island which is the RSPB reserve… I have not taken a boat trip to it either)… give me a shout… we could meet up.

… the bitter beer of choice for many is Earl Soham Brewery’s Victoria… outstanding pint…it was rather cheap as low local production but as it has become now so popular apparently helped by Ed Sheeran who is very much a fan, we may soon be paying more for it as the production tax goes up to the next level… much folk shanty singing in some of the local pubs on certain evenings, with my favourite being the The Quay Street Whalers, from Orford - happy birthday Alvar ! … just pulling the thread back to music… and I am sure folk sounds wonderful on the Nat02 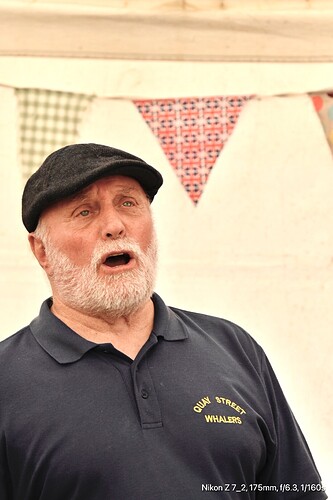 We only got as far as the Martello tower! Fabulous area. We love Aldeburgh. Thorpeness and Dunwich Heath are great. Not to forget Southwold and those expensive beach huts.

Excellent… so you should also head south from there into what is known locally as the Peninsula with its southern boundary on the River Deben, Sutton Hoo, Woodbridge and Bawdsey Quay… it is a lovely part of the world with a great history… marshes, seascapes, rivers, shingle beaches villages and forests…. And Folk Festival

Oh yes it is, oh no it isn’t !!!
The RSPB reserve is on Havergate Island & according to the map it is an island. 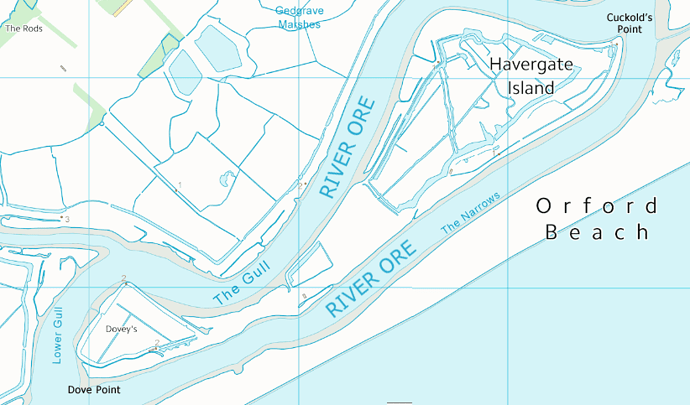 Thanks Simon, we have been to Sutton Hoo, Orford Castle and Framlingham Castle etc. I didn’t even mention the best fish and chips in Aldeburgh, buying Dover Sole from the beach vendors and lovely little cinema. I better stop now this thread is supposed to be about tuners!

Ok … sorry yes there is a little river island separate to the Ness and south of Orford, which is the RSPB reserve, Havergate island… I was referring to the Ness itself which is the spit, where the antennas are, where the nature reserve is and what is owned by the NT and where you take the ferry to…
I thought somebody was suggesting the Ness was an island… which clearly is not the case, possibly my misunderstanding… I better edit my post

If you like inshore fishing… yes there is some limited fishing at Aldeburgh, a bit more at Black Shore, Southwold, but the I think best choice is at Felixstowe Ferry, Old Felixstowe… superb… and you could also pop in and say hello at Signals on the way.

It’s fairly commonly agreed, in Scotland at least, that the best fish and chips are sold by the water in Anstruther in Fife - go for the haddock in breadcrumbs, awesome!

This has nothing to do with Naim or the NAT02, but the Anstruther shop does a remarkably good fish supper!

anyone interested in getting this thread back on track ? It’s pretty funny where it’s heading

I don’t remember seeing those on the list of foods on offer.

I confess that I’ve never eaten a fried Mars Bar, nor seen anyone else do so. I rather think that they may be an elaborate hoax, rather like Nessie, designed to get gullible Sassenachs north of the border.

Apologies, Bevo, your post appeared as I was typing mine.

I don’t mind what’s going on

I confess that I’ve never eaten a fried Mars Bar, nor seen anyone else do so. I rather think that they may be an elaborate hoax, rather like Nessie, designed to get gullible Sassenachs north of the border.

Deep freeze the Mars bar (or similar choc bar), coat in batter & deep fry like deep fried fish (& chips)
I’m not a Mars bar or any other over sweet chocolate bar fan, but these are truly 'orrible.
It’s like kissing the Blarney Stone, you only need to try it once.

Well, thanks indeed for that, although I wasn’t looking to try frying one, any more than I would smooch that wretched Stone.

I have read of tuners ‘drifting’ off signal. Can any kind soul here please explain what causes this to happen?

if i had two naim tuners I am not sure I would admit to “parking / maybe hogging” a wonderful (extra) tuner - maybe you have a surround sound set up?

to answer your question though - a naim tuner going on “drift”, or was it too much thread drift -

after a power off, my Nat 01 (serviced 2016) with a wonderful G17 rigged by the late talented aerial man himself, RS, I find the tuner drifts a little from its frequency, in my case usually Beeb3 90.5 pointing at Sutton Coldfield, where I have to tweak the frequency just a tad, for a few times for up to half an hour. After that, it is rock solid for days. No doubt @Simon-in-Suffolk will be along shortly to explain in his usual and much appreciated straight forward way, in terms the rest of us can all understand, as to what causes the drift.

My Nat03 only needs re-tuning every 6 months or so! When I had it serviced Naim said I had a faulty tuner head which was repaired or replaced.