Perhaps a shot in the dark, but do any forum members have any experience of the early NAT 05 with the old style case and Philips tuner head and the later ALPS version sound wise and sensitivity wise?

I had a later 05 which I sold years ago and would quite like reacquaint myself with one… so just wondering if there is much difference performance wise. I am hoping Richard might have some thoughts!

Michael, I don’t have experience of both. Mine is the one which has the red stereo light. I think that makes it an early one so I have taken it to be a Philips. Anyway, it sounds brilliant.

Sorry, not the meaningful comparison that you were looking for, just enthusiam.

Thinking back to the old forum & the times the Philips & ALPS heads were discussed, I don’t remember anyone that had experience of both.
My NAT-05 has the ALPS & it too sounds brilliant; mind you it should sound good as its on the end of a Ron Smith G-14 & the nearest transmitter is 45kW & 5.6km away.
Regarding sensitivity: Its as sensitive as most other tuners I’ve had. I listen to a few low power stations, a 3.0kW @ 56km distance that has a little hiss but keeps the stereo light. Another very low 0.3kW @ 33km out, is about the limit as it does not hold the stereo light.

Thanks Christopher yes you are quite correct the red light does indeed mean that yours is the earlier Philips head model and good to hear that it sounds great. Thanks for your comment too Mike yes I did check on the archive and although the difference between the two is discussed as far as the circuitry is concerned there is no mention of the qualities. I was always pleased with my newer version but sold it when I bought an NDX with the FM/DAB module fitted. I then traded that against my current ND555 which of course does not have the FM module option. In the meantime I am using a Marantz ST551L which I got from a second hand shop in town for £12 which sounds pretty good… but I think I would like to get another 05 when one comes along.

I have never compared one against the other directly. My own NAT05 was a later ALPS head unit. I do recall chatting with one of the R&D guys about the NAT05. When I mentioned mine was an ALPS he said that was a shame as the Philips head had a bit more scope for “development”, whatever that might mean… Anyway, the gist of it was that they’re both very good, so don’t worry too much about it.

I have a late 05 with a green light (whatever that means) which I bought for £180 earlier this year. It’s unbelievably better than the FM module in my 272, which I imagine is similar to that in the NDX. It makes radio broadcasts so much more engaging.

Thanks Richard and HH … there are a few around online for sale so I won’t worry about which version they are. I definitely agree the FM module is no match for a dedicated quality separate receiver.

I have a later 05 with the green stereo light… but I am not a great fan of it unfortunately, I use my NAT03 instead… warmer, smoother and cuddlier albeit not as detailed and stereo imaging not as good…but I still prefer it…

Good news I have managed to find and purchase an early 2001 model with the Philips head. 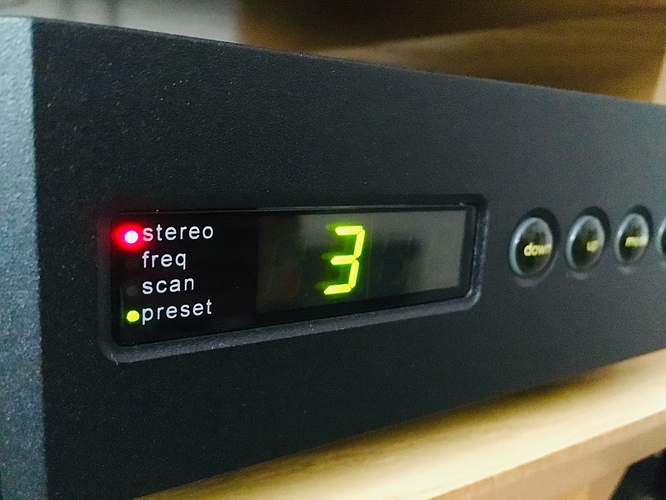 The tuner arrived this morning and is up and running and sounding marvellous. I had forgotten just how good Naim tuners sound on Radio 3 and 4.

I am a very “stock” guy; but I would consider a red-LED mod of my 05XS if factory would approve. It would be a wink to fellow inmates only.

Silly, but honest, am I.

Strange how we all have our preferences, given the choice I prefer the look of a green led stereo light to match all the other green lights around the system… which is what the later models of the NAT 05 have, but mine is an early one with the red led. No doubt it would be easy for the led to be swapped during a service.

Truth — I run with displays off. But the tiny red dot would be readable across the room, if the mood suited, and I opted on occasion to leave the display on. Minutia indeed.

Niche fact - When you turn off the display on a tuned Philips NAT05, the red light stays on.

Niche fact - the Preset LED on units with the ALPS head does not illuminate at all. the original Philips based 4 LED display was kept. Annoying as it took me a while to discover it was not faulty.
The LED’s will stay on with display off & it has a yellow stereo LED.

Interesting… my simple solution is to select a weaker pre-set station where the red stereo light remains off when the tuner is not being listened to. I keep all my displays off on my boxes.

On my late build NAT05 XS the indicators are off when the display is off, so the only thing on is the logo.

I understand that was a change in the XS update.