Ok, not sure if this is the best move for me right now but I’ve been curious for a while on options for an upgrade of my Naim NBLs. I love the speakers for sure and have been slowly upgrading everything on the front end and am curious if I’m missing out of anything my system can do with a new pair of speakers. I have a 552 (non DR)/300 DR/LP 12 Radikal, Superline, Supercap DR/5dxs2/ndac/555PS. I have superlumina speaker cables and have done the A/B comparison next to NACA5 and I think the Superluminas beat them. I also have a chord music 5 pin interconnect between the ndac and 552.

I need to have speakers close to the wall. Room is 15 feet wide by 25 feet deep. Quite a bit of glass windows though, large carpet on the wood floor and pretty large couch. Small kiddos pushed in a tweeter a year and half back but they seem to be working well.

I like these speakers and maybe I just settle with them. I don’t know if anyone ever listened to the Linn 242’s when they were around but I always liked the sound of those. I don’t have a Kudos dealer near me which others seemed to have gravitated towards after NBLs.

Thanks all, have a great weekend!

Thank you, that was something I had thought of as well.

As an NBL owner of ~20 years, I’d echo what @Michaelb says. My NBLs have accommodated multiple upstream upgrades and I’ve never felt the need to change them. I do have a shortlist of potentials just in case disaster should befall the NBLs, but they still perform so well and are still cosmetically mint.

I had another look at Paul Messenger’s review of these in Stereophile. Fascinating speakers and I can understand why they’d be difficult to replace.

Which wall do your NBLs have behind them?

I can imagine they could be best with the 25 foot wall behind, keeping them away from the corners.

Not much would be upgrade to NBL
Perhaps DBL or Titans.
I’d stay clear if all units are working order.

As a former NBL owner I understand your doubts if changing of the speakers is an appropriate upgrade. I was in the same situation like you and replaced my NBLs with Kudos Titan 808. Both speakers were driven in active mode. The improvements I got are quite reasonable and I‘m happy that I took this decision.

Could be tricky this, good luck. The NBL is simply the finest speaker i have ever heard.

Thanks all. Seems to be the consensus that I’ve been coming to as well. Why fix it if it isn’t broke right? Appreciate all that shared comments!

At least they seem not to be fussy about placement 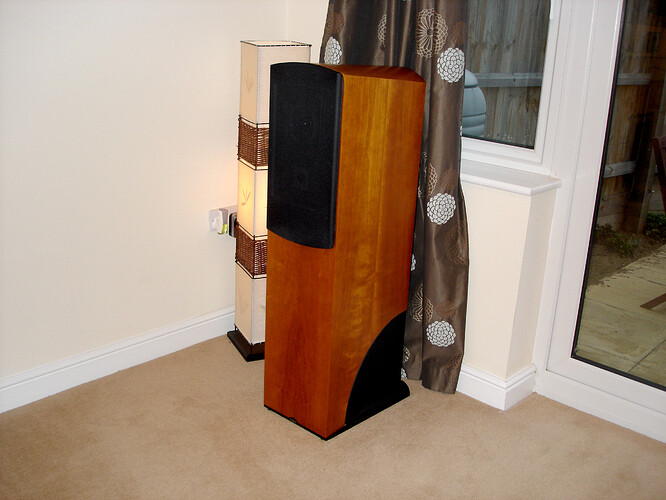 I would try and have a listen to similar systems with say Kudos Titan speakers on the end to see how you like them. Then you will find out whether you like their presentation but you will probably find MichaelB is right.

NBLs could be fussy about placement, but they were a bit different to the SBL, DBL, IBL etc. The bass response also responded to toe-in. All likely due to the pair of bass drivers firing sideways at the base of the speaker.

I spent a fair bit of time with them, setting them up and trying them out in different positions, but I never felt like I got the set-up nailed in the same way as I did with the SL2s. Frustrating really.

I did try pretty hard, as did others at Naim. I always ended up a bit frustrated with the NBL. I felt it had compelling attributes and could often sound really good, especially when active, but I felt the SL2 was better in the mid and top and was more seamless and coherent. Of course, I recall that Doug was not so much a fan of the SL2s and much preferred the NBLs…

Is that @MichaelF ‘s room ? IIRC, a pair of Titan 808s have replaced the NBLs.

I haven’t found them too fussy on placement. I never tried to toe them in though. Only thing that frustrated me a bit is not being able to find replacement grills. I tried making a pair and that was a disaster. My two year old enjoyed poking at the tweeter but it seemed to be okay in the end.

Don’t know, found that pic interesting as they are placed between glass, in the corner, and near a lamp. My speakers would hate that

Yes, I’m with Doug. In fact it was Doug who arranged for me to visit the factory before they were assembled to check that I was happy with the veneer. I seem to recall that he might have been using NBLs at home at the time.

FWIW I have mine toed in slightly and about 6” from the wall in the middle.