Very pleased to join this forum. I promise to post on the system pics thread, I am an old school Naim user. LP12+NAIT2 dating back to the late 1980s.

I hope it is not bad form to ask a question as one’s first post here, but here goes.

I like in a rural area in UK, with flaky broadband with frequent outages. My ISP has provided me with a 4G mini-hub to use during outages. But it only creates a wireless network. I can not wire it into my existing network.

I have an ND5 XS2, connected via wireless into my existing network.

Is there any easy way to switch the ND5 XS2 across to use the back-up network when my normal internet is down. The only way I can see it to do it involves a hard reset of the streamer and reinstall.

My ISP will not do this I am afraid. But I was wondering about buying the sort of Rural Model you describe. Cracking open the wifi only one provided to me and swopping the SIM over.

But wondering if there was a way to do it within the NAIM app. Can the same ND5 exist as two ‘Rooms’ on different networks for example ?

Can the same ND5 exist as two ‘Rooms’ on different networks for example ?

Unfortunately I think not. The Naim app has to be on the same WiFi network as the streamers.

My ISP has provided me with a 4G mini-hub to use during outages. But it only creates a wireless network. I can not wire it into my existing network.

So if it sets up a WiFi network then the answer maybe to have a wireless access point that connects via your 4G originated WiFi and has an ethernet connection for you to plug into your existing ethernet network.

Whether that would work or not is one thing and whether it would be sufficiently convenient is another. But I’m sure there is a solution there waiting to be explored.

That will down to your router configuration.
If your ISP and/or router supports it, then you will have resilient access using alternate access routes like 4G. BT offers such services in the UK like several other quality ISPs. That is transparent to the streamer and everything else on your home network.

Easy solution would be to rename the network SSID and password so that they are the same on both the router and the 4G mini hub. That way the streamer and all your other devices will switch seamlessly between them. 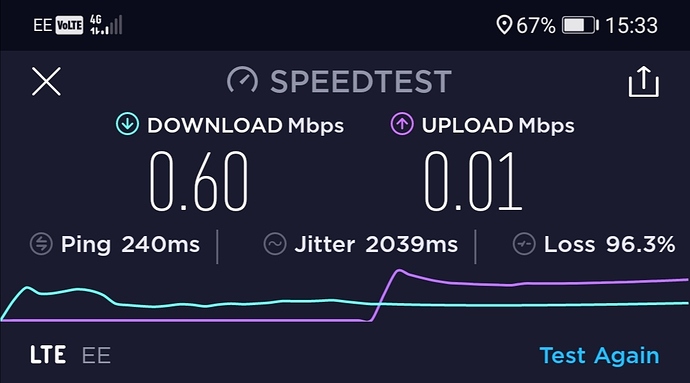 That’s fairly typical of mobile coverage around these parts

That might work providing the phone with the Naim app moves to same network as the ND5 XS2. The OP would need to turn off the broadband WiFi to ensure that one or other of phone and Naim unit didn’t switch back to the wrong network. So it doesn’t strike me as a very practicable way of doing it.

But the OP said that the mini hub would be used when the fixed line service is down so the two networks won’t be running at the same time. Trust me, same network details on both router and mini hub is the way to go

It also saves having to reconfigure all the other wireless devices in use.

Easy solution would be to rename the network SSID and password so that they are the same on both the router and the 4G mini hub. That way the streamer and all your other devices will switch seamlessly between them.

No it won’t… the client will need a new DHCP registration and pick up the subnet, router address and DNS.
If you set everything on both routers the same… then you could frig, it at IP but your layer 2 network address would be out… so the devices would need to re ARP… it would not be seamless… but could be limited down time…
But any flow or association you had with a service on the internet would break… as of course your public internet address would have changed…
To do this properly you need to use specialised routing protocols … most consumer stuff just doesnot do this.

I’m with Simon on this, I don’t think it will work. Also, a dropped internet connection doesn’t mean your LAN stops working, so I can’t see automatic handover to a different network working.

I have a 3rd party router that I use instead of the router the ISP (Talk Talk) sent out. The SSID and password are set to be the same on both. If I ever plug in the Talk Talk router rather than the 3rd party one, I just need to restart each device on the network and it all just works. No need to reset passwords or anything like that on any devices connected to Wi-Fi. Phones and laptops are easy to switch between networks if the SSID and password are different but printers, Fire TV (or other streaming devices), Sky boxes, Smart TVa and the like are a pain but with the same network details on both router and mini hub, restart each device and you’re good to go

with the same network details on both router and mini hub, restart each device and you’re good to go

I do the same with a Linksys router and a Ubiquiti access point and it works fine for me - definitely worth a try.

Thanks everyone for taking the time to suggest ideas.

As ChrisSU and other have said, the problem is not my local network. That is fine and I do not want to disconnect it as it is doing other duties in the house…security cameras, lighting control, central heating etc.

The problem is that the pipe to the internet frequently gets flaky. It does not disappear completely but can fall to just a few kb of band width.

Playing last night I discovered an inelegant but workable solution, that does not involve me spending any money.

The ND5 does have an obvious way to cope with two networks. One wired one wireless.

I have the wireless connection to my normal network. And I repurposed an old Apple Airport Express to be the wireless end point for the 4G back-up network, and connected to the streamer’s wired connection.

When my internet goes down, I power up with Airport and the 4G hub. Flip iPad over to that network. Restart NAIM app and all seems to work.