As some of you will be aware I became the owner of a ND5XS2 last week. For streaming CD rips from my NAS and FLAC quality from Tidal it has been flawless but for internet radio it is dropping out regularly, especially with the BBC stations. I’ve rebooted the router and the ND5XS2 but the problem persists. In fact with some BBC stations the streams occasionally won’t even start. The ND5XS2 is connected by Wi-Fi and internet connection speed is 16Mb so that’s more than good enough for streaming. I have a couple of Sonos speakers in the house and they stream the same radio stations without any problems. Is this a known issue or is there something I can be doing to get the radio working reliably? Unfortunately an Ethernet connection to the streamer is not an option right now but I don’t think Wi-Fi is the problem here as streaming from the NAS and Tidal is flawless.
While I’ve been typing this question the BBC Radio stream I was listening to just stopped completely and on the Naim app it just says Pending please wait

Mine is on bbc radio most of the day, wired connection though, and never dropped .

I know this is a boring thing to say, but try running a wire and see if it works. I’ve never got internet radio working without a wire. I know it ‘should’ work on the WiFi, but these things are funny.

I use mine every day & have done so for years & don’t recognise your problem, but its all ethernet connected.
What does the buffer number show on the iPad or Android app, it should be 100%, anything less means the wireless connection is struggling.
Where are you located ?? in UK only BBC over Naim iRadio is an HLS 48kHz 135kb/s and 339kb/s, Sonos is the regular 44.1kHz 128kb/s BBC service & thats the same as is available outside UK

Hi, wifi ‘speed’ is only a small part of the story… there is quality and contention as well. Ie how many other devices are sharing your WLAN and how many have a better signal condition.
16 Mbps speed on wifi using modern wifi protocols is low…and actual throughput would be quite a bit below that.
Therefore if using wifi make sure you have full or nearly full signal strength on your ND5XS2, and if you have other users/devices on your wlan then use two or more overlapping wifi access points offering the same WLAN that are Ethernet connected back to your hub or switch, or use an Easy Mesh system with at least two Ethernet nodes connected to your switch or hub.
Having a single wifi access point trying to connect and manage everything is usually a significant compromise, and in many situations will lead to very bursty/inconsistent throughput likely to cause dropouts on web radio and other near real-time services… but fine for web and social media use, and you will probably fare better with UPnP use as well which uses a different media transfer dynamic.(on the new streamers)

@Mike-B Where is the buffer number? I can’t see that on the Android app or ND5 internal web page. I’m in the UK

@Simon-in-Suffolk 16Mb is the ADSL connection speed to the exchange, we’re on a rural exchange in Kent and no fibre here so 16Mb really is as good as it gets and I’m only getting that after fitting a filtered faceplate to the master socket and plugging the router in there. The wifi speed will of course be a lot faster than that. The ND5 is in the same room as the router and using the Wifiman app on my phone it measures the signal at -39dBm when I hold it next to the ND5 and it reports the speed as 144Mbps. I can stream Netflix and Amazon Prime in HD to an Amazon Fire TV stick in the same room with no issues at all so surely there’s nothing that internet radio can throw at it that it should struggle?
Also, how can I measure signal strength on the ND5?

@hungryhalibut Wired is not an option at the moment, the only way I could do that is a powerline adapter plugged in to an extension block and that will surely just make things worse. If ethernet really is the only option then I’d be looking at (a rough guess of) a 20m cable tacked round the skirting board from the router to the ND5.

You say you’re streaming Tidal - is that over wifi too?

Where is the buffer number? I can’t see that on the Android app or ND5 internal web page. I’m in the UK 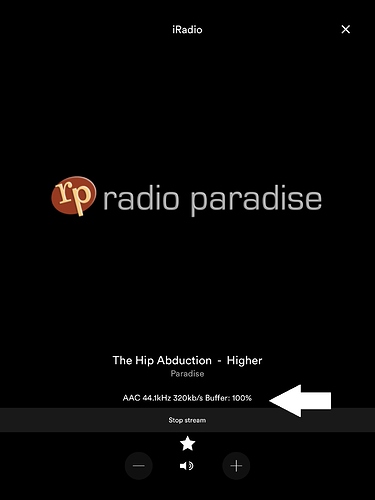 I think it might be different on the later kit Mike, I don’t see that either on my NDX2/app

Hi Mike, the new streamers do not show buffer levels, either on the app or the front panel. I guess Naim think that with the increased buffer size, there is no need.

No I’m not seeing it either

Yes, Tidal HiFi over wifi and it is solid.

I’m listening to Radio Paradise AAC 44.1KHz 317kb/s and so far this is solid too. Seems to be particularly bad with BBC Radio, even when switching to the lower res streams

Seems odd, did you do a factory reset since you bought it?

If you mean pin in the reset button in the back then yes I did. Not something I want to do again given the problems I had getting it working with wifi in the first place

If I were to order a ND5XS2 Hi-Fi Corner

Well after almost throwing the thing out the window I’m up and running. First up it was not in Wi-Fi mode. The app said the Mu-So was not in Wi-Fi mode even though I had selected nd5xs2 on the page to select what device you want to set up. OK I’m not setting up a Mu-So but I’ll go with it. It then said to reset Wi-Fi using the reset button in the pinhole next to the status indicator. What pinhole next to the indicator? Then I remembered a reset on the back from the quick start guide so I pres…

I think it might be different on the later kit Mike, I don’t see that either on my NDX2/app

OK I did nt realise,
@ChrisSU I take your point about no longer needed with the big buffer sizes on regular streaming, but its a good indicator tool on internet connection problems, maybe something Naim to rethink about

I agree it might still be useful on occasion, but the remote and display on the new streamers have significantly reduced functionality compared to the old ones, so I guess Naim think otherwise.

And of course in the case of the ND5XS2 it is a case of what display? what remote?

Strange. Have you tried the BBC HD streams? These are higher quality, and should work on all Naim streamers (except for some very early models)

Look in Naims BBC list, the BBC services are all HLS, not AAC, there is standard & high res, high res is 48kHz 339kb/s