Hello, I’m new to Naim and I acquired this NDX 2, which I find a great gadget. However, when I follow the approved method of adding new radio stations, I don’t get any - it goes back to the “please visit http://naim.vtuner.com and sign up using ID XXXXX” What am I doing wrong/not doing?

Strange, I seem to recall mine was a fairly straight forward set up. From memory it was something like search, BBC, BBC 4 add etc.
I will take a look tonight and report tomorrow if you have not had any responses by then.

I’m glad it’s not just me! I’ll listen to the advices others post with interest

I have yet to find a station that wasn’t listed in the iRadio menu, although finding it (with no global search available) sometimes takes a bit of digging. Then, once you have found a station, you can save it so that it appears in a favourites list.

Thanks, Chris. It all seemed straightforward and I went through all the steps - but nothing appears on the NDX2. I checked in vtuner and the groups I’d allocated, “classical”, etc. were still there - just not on the machine itself. It made me think that I had somehow overlooked a step, but I couldn’t see it.

The Naim radio interface is like going back to 1985 again.

This is what the Naim folk advised:

Hello,
The transition should be immediate. If the station does not, please try the following:
*1. Please try to power cycle your device. To do so, power off the device, and unplug the power cord. After waiting 30 seconds, plug it back in and power it back on to try again. *
2. If the station is still not present in your favorite folder, please double check the ID# of your device; you may have registered the wrong ID#.

Solution 1. Did not work - still no added stations.
Solution 2. Pretty sure I inserted the right number, but naim.vtuner.com doesn’t seem to want to talk to me at the moment.

P.S. It’s back and ID confirmed to be correct. So, it appears that, so far as adding radio stations is concerned, I am up the proverbial creek without the equally proverbial paddle.

One thing I can’t fathom is how to change the order the stations sit on the homepage.

On the new streamers you can’t change the order of the radio stations as you could on the earlier streamers.

You can on a Muso though, go figure!

Update: got on to Naim itself. The first suggestions didn’t work. In the last exchange, they asked for the MAC (? something like that) number. I provided it, and all has been silent ever since. I guess I’m destined never to add radio stations.

I would try to get back in touch with Naim support. Explain your steps taken so far.

Thanks, Richard, but the ball’s in their court. They asked for this MAC number, I think in the assumption that it was wrong somehow, so I supplied it. Hard to see that it could be wrong as that’s what the machine says it is.

When using the Naim app pick the NDX -> then the setup icon (the gear icon in the top right) -> Input Settings -> Internet Radio. This will show the VTuner mac address. See screenshot example below (I removed some digits to stop some kind person abusing mine!) 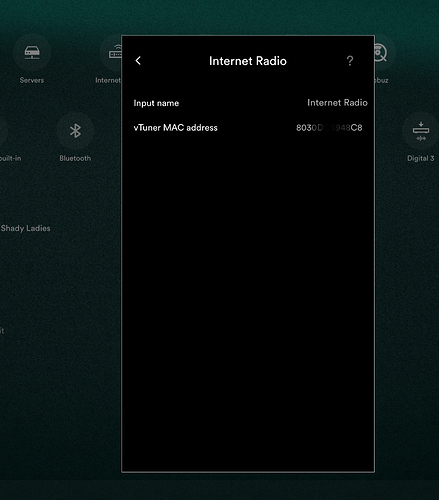 Next up browse to naim.vtuner.com
Enter the mac address - see screenshot below. 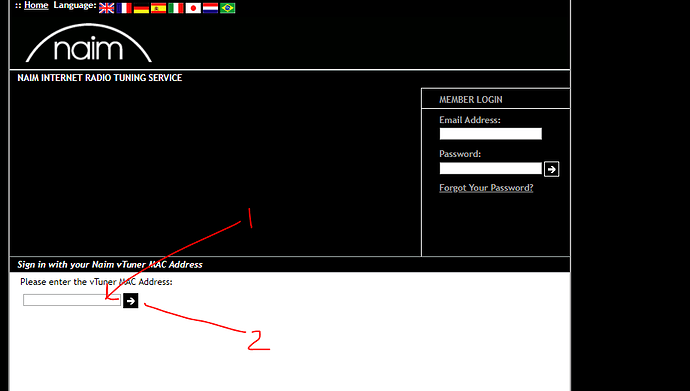 You can then add stations by click on the ‘Add Another Station’ link. 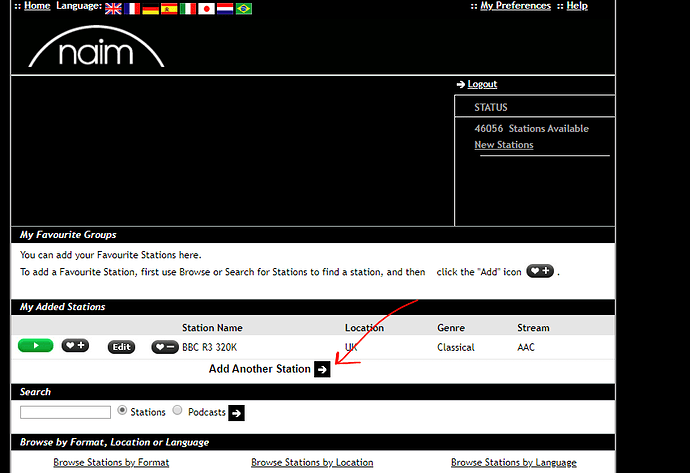 Each one added will appear in the Internet Radio -> Added Stations view.

Now, after saying all this, we prefer that if you have a station that VTuner don’t know (or its a better quality version), then let us know and we’ll ask VTuner to update their directory. Alternatively, if you can’t find a given station, let us know what station you are looking for and we’ll let you know where it’s hiding in the vtuner directory.

Many thanks for your time and trouble in putting up that detailed run-down. I shall try it tonight when I get home.

Tried all of this and it does not add stations to the Added Stations folder, they appear on vRadio web application in the folder you select on the PC to store them but not on the NDX 2, have tried powering off and no effect.

So it’s not just my bungling incompetence!