At last I have my olive Naim hifi up and running an fully serviced. I just have two issues to sort out and am hoping I may get some help here.

First issue
Despite a reasonable wireless signal (quality 90-100, strength 40-50) the NDX drops off the wireless* network quite frequently when not in use such that I often have to reboot it before use to get it visible on my network.

Second issue:
The NDX does not work very well with Logitech Media Server* vi UPnP. Fast forwarding or rewinding part way through a track or back to the beginning always results in no audio (although the music still ‘appears’ to be playing.

I’ve attached a screenshot (I hope!) of the settings for the LMS plugin UPnP/DNLA Bridge in case anyone else uses it and can spot what’s wrong. 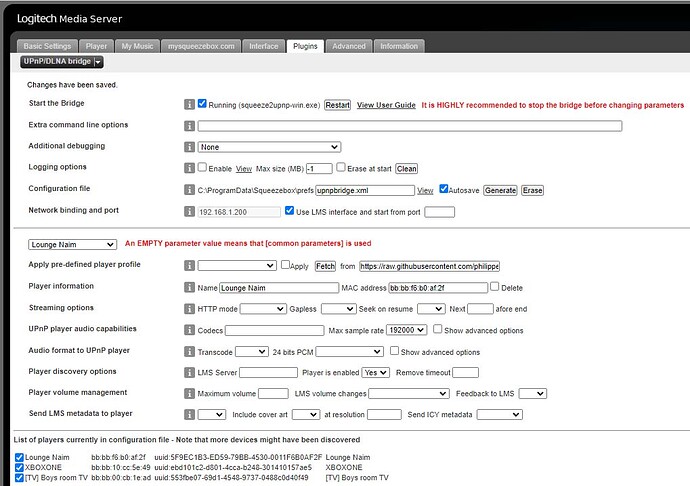 Those Homeplugs can cause havoc without being connected to your streamer as they emit high levels of interference by design onto your entire mains power circuit and elsewhere. Try a proper Ethernet cable instead, even if you just run it temporarily across the room for diagnostic purposes.

I’ve never used the UPnP Bridge, but I use the ChromeCast Bridge (developed by the same guy). LMS was located on a cheap Windows machine and was connected using wi-fi (no Ethernet port). It was never bug free, but I significantly reduced the problems by transcoding everything to FLAC. After doing that there was a new option called “Flow,” which causes LMS to send the music as a continuous stream. My two ChromeCast Audios would not know what was playing (and when I tested it with my Nova, it didn’t know either), but LMS knew, and the iPeng app knew.

I don’t know if it’s an option for you. Among other things, I don’t know how it would handle better than CD quality. But it might be useful in troubleshooting.

You can also contact Philippe, the developer, on the Squeezebox forum. He has answered a lot of questions over the years. Got an updated version of the ChromeCast plug-in this morning.

I’m afraid the WiFi on these old Naim units is known to be very flaky. It’s hardware-related so you have to work round that.

The cheap and certain answer is an Ethernet connection. If you really can’t manage that, then you may need to be thinking about moving your router or swapping the NDX for something else.

It’s been a while since I used LMS but I always found the UPnP bridge to be flaky and unreliable, especially with my 1st gen. NDX even though it was otherwise reliably on a wired Ethernet connection and was fine with regular UPnP, Tidal etc.
The NDX does, as David says above, have a mediocre WiFi module. You may find that it works more reliably with a more robust modern Mesh wireless network. Alternatively put a wireless extender near it and connect it to that with a cable to bypass it’s built in WiFi and you should get a reliable connection.

Reality is you appear to be someone that absolutely cannot have wired. But thats how it’s all going to work. so. I don’t know really.

It’s been a while since I used LMS but I always found the UPnP bridge to be flaky and unreliable, especially with my 1st gen. NDX even though it was otherwise reliably on a wired Ethernet connection and was fine with regular UPnP, Tidal etc.

Did you ever try Andy Grundman’s plug-in that turns LMS into a UPnP/DLNA server? During my experimentation after purchasing my Naim streamers I tested it, and it worked during the very brief period I used it. I recall not spending very long with it, as its indexing options did not meet my needs.

It was an LMS to UPnP plugin, so maybe the same one? I used it to try getting Qobuz and Radio Paradise FLAC onto my NDX, but it was unreliable and sound quality wasn’t great.

There are two different plug-ins, and they are sort of complementary. In layperson’s terms, one makes the DLNA renderers appear to be Squeezebox devices. The other makes the LMS act as a UPnP/DLNA Server.

To be clear - you choose one of the two.

Thanks all.
It looks like my best bet would be to try a wireless extender (thanks @jmtennapel) and if that doesn’t work try replacing my current rather ad-hoc mixture of home-plugs and wireless access points with a mesh network. In a five bedroom house that has been created by building an extension on two knocked-together semi-detached properties, one 70s extension and two 1930s extensions creating a decent wireless network is quite tricky due to the plethora of external walls.

@jegreenwood
Thanks. I use Philippe’s Chromecast Bridge for a number of devices and for me it’s rock solid. I wonder if your issues might be more down to having LMS on a wireless connection?
Using Andy Grundman’s plug-in (turns LMS into a UPnP/DLNA server) would mean sacrificing too much of the LMS functionality (e.g. separate libraries) - I don’t use the NDX interface or the Naim app at all and use the Squeezebox Touch as a display (and nearby touch screen controller).
I have tried the Flow setting but for some reason (that now escapes me) it was not satisfactory. All my files are encoded as Flac.

@davidhendon
Thanks. I have tested the NDX against a Dac32, a Squeezebox Touch and an SB+ (an SB Classic with Naim-like adaptations). The NDX sounds best so the only other streamer I’d consider is another Naim… but the expense… and I still stand the chance it’ll drop off my network

I’ll continue to fiddle about with the UPnP/DLNA bridge settings to see if I can get fwd/rwd to work properly (but any suggestions still very welcome!).

BTW. Does anyone have a recommendation for type/make of wireless extender or mesh wireless network?

If you are a BT customer their black WiFi discs seem to be a good option. With other ISPs you can still use their white ones.
Ubiquiti is a well regarded brand, more commercial and maybe harder to configure but if you want a proper Mesh setup it’s probably better than the consumer brands. Look at their AP-AC Lite.

Whatever you buy, make sure that it is possible to disable the DHCP server on either your ISP supplied router, or the Mesh devices. This often causes problems as some devices (such as the Google ones) do not offer this option.

Thanks @ChrisSU and @jmtennapel
I have now set up a spare TP-Link AC1200 access point as a wireless extender and shall see how it goes. I am hoping not to have to spend yet more money… and my home network, mish-mash as it is works very well so I am a bit loath to replace it.

Worth a try, especially if it allows you to ditch the Homeplugs.
On the other hand, starting with a ‘mish-mash’ and adding to it might just make things worse. Sometimes it’s better to start from scratch and do it right. Compared to a Naim system the cost isn’t high.

Just to add that I have an NDX and BT WiFi with the mysterious black disks. Connection has been fine. No disconnection issues.

So worth exploring if it’s an option

Thanks. That is good to know. However, once I’d worked out how to stop our devices connecting to it wirelessly using an old TP-Link router as a wireless extender and plugging the NDX into it (and a Logitech Touch used as a touch screen controller for it) has worked a treat. Even 24/192hz files run flawlessly.

I’ll probably upgrade to a Ubiquiti wireless mesh network at some point… but not just yet.