How long did other people leave their machine saying “Updating” before they switched it off at the wall and re-booted.

Normally it should take about 5 minutes, sometimes 10, max. 15. It depends on how many things the new version is updating. And these times assume that download time is negligible - obviously if the internet connection is super slow, the time for this must be added

Thanks @Suedkiez
I’ve done one previously and it was done in a few minutes, hence asking the question when it’s been stalled for an hour and a half.

I’ll power it down, leave it for ten minutes and fire it back up

I’d power it down and pull the plug, wait 30 minutes. Then also shut down and reboot the router, wait until your other computers/phones have full connection again, then start the NDX2. Just in case there was a router hiccup

If it all fails to update, restarting it should let it fall back to the previous firmware, which is saved. Then you can have another go at updating it.

I have had one similar stall when upgrading. Like you I tried all the usual fixes including restarting, factory resetting and unplugging and having a cup of tea (usually does the trick) to no avail.

The thing that worked for me was a single tap ( not hold) on the power key. The ndx2 immediately showed “updating” and the progress bar marched along finishing the update quickly.

Worth a try if nothing else works on the off chance your unit is in the same state mid-update as mine was.

When this has happened to me (which is not that unusual) I just go straight back to the settings menu and to ‘Check for Updates’ and try again. This seems to work without the need to power down, unplug etc.

Thanks everyone. Funny thing is that I wasn’t trying to update it when it got stuck with “Updating” on the screen.

I’d just plugged it in and it came up with that. Having waites around for an hour or so, I unplugged it for ten minutes. When I plugged it back in, it fired straight up.

Funny thing is that I wasn’t trying to update it when it got stuck with “Updating” on the screen.

Something similar happened to me when I was beta testing on a Nova, about 15 or 20 beta versions ago. After an hour or so of it sitting there slowly flashing the power button light but doing nothing else, I unplugged it, plugged it in again and it finished the update on its own in a minute or two and has been normal ever since.

Mine has just got stuck in some updating loop. Powered up this morning ( I’d turned off the xpsdr last night). 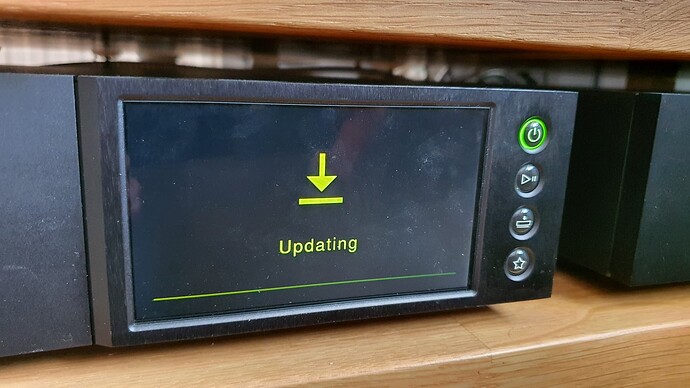 It hadn’t asked and I hadn’t given permission. And whilst the app could see the ndx2, it couldn’t connect.

Somewhat irritating not being able to use my kit.

Turned off xpsdr and see what gives.

OK now. Had to power off the xpsdr. Power back up. Used the regular naim app to check for firmware updates, this forces a reboot.
After what seemed like a while, the app was then usable.

But odd, not seen that before.
When I switch off the xpsdr, I always shut down the ndx2 with a long press of its power button first.

All back running now. Still odd though.

The wait for the app to show the unit in the Rooms screen after firmware updating is normal and intended behaviour.

A long press of the NDX2 front panel button doesn’t actually turn the power off. It puts it into Deep Sleep, but some stuff is still working. If you are restarting because of an odd condition, then taking the power off completely is what is recommended. So turn off the power supply or if using the internal power supply, then pull out the mains plug after putting it to sleep.

I don’t know why it went into updating on its own though. That’s positively wilful of it!

No idea what it thought it was updating. It’s on the latest firmware.