As some of you know, I have recently purchased an NDX2. It was supposed to be an ex demo unit but with a lucky turn of events, which I won’t go into, I ended up being sent a brand new unopened unit for ex demo price.

I had recently posted asking for advice on using an old Nait 1 as a stop gap whilst I save for a SN3 but it was suggested that I try the unit straight into my old Hypex power amp using the variable output rca. I have tried this and I thought I’d post my experience to help others thinking the same in the future.

Well the NDX2 arrived this week and was immediately connected up. The findings are interesting. Firstly, the detail is fantastic. Open and spacious soundstage with very very deep bass. I can tell there is so much potential. I was hopeful that the setup would be adequate but the issue is that there isn’t much life and soul. The musicality is missing, even in comparison to the Atom. It sounds great when turned right up, but as soon as you drop the volume everything gets a bit wishy washy and lean if you know what I mean. The bass is there at low volumes but generally the music has no drive and presence.

This highlights the importance of a pre amp!! imo.

As a result, I don’t think I can live with it for the next 6-8 months whilst saving for a SN3, so I found a really good deal on a Nait 5si used, 2021 version only 7 months old. The reviews look great and luckily my speakers sounded fab even with the 40 watts from the atom. I am looking forward to hearing how it sounds with the Nait.

Has anyone listened to the 5si with an NDX2?
I know most would consider it an unbalanced (mullet) system but it’s only temporary. 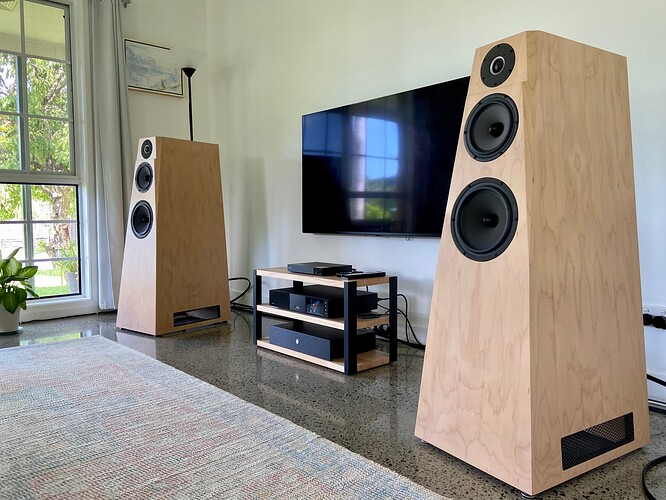 Hi Mark, I don’t tire of seeing those speakers

Not much to add, but I think the preamp section of the 5si is a bit different to Naim’s other integrated amplifiers, I think it is passive. I don’t expect it to make a massive difference to how good the 5si sounds (I liked the 5 I had on loan for a few months), but that’s my assumption/biases, not fact

Also, I guess the NDX2 needs a few hours on it before it starts to sing, no idea if that’s part of the issue. How many hours have you put on it?

Mine took weeks to settle in…

I’m sure sometimes else knows the details, but isn’t the variable output of the NDX2 a bit of a compromise too? Maybe it was worth a try, but simply bypassing that feature by using the 5si means you’ll get better results.

Hi @gthack, thanks for the comment on the speakers. I think the fact that the 5si actually has a pre amp, even if it is passive, will make the difference. It’s definitely not the lack of run in time that is responsible for this issue it’s that it sounds very different at different volumes.

Absolutely. That’s what I’m getting at. It was only put on there for Apple airplay certification apparently. I think it needs to be set on fixed output and into a preamp. It’s not that it doesn’t sound good, it’s just that it needs to be cranked right up to sound right.

it’s just that it needs to be cranked right up to sound right.

Are you using the volume set high on the Hypex and running variable volume?

Anyway, a bit of burn and when the SN3 slots in, you will be delighted😎

The hypex is only a power amp. No volume control. Hence the use of the NDX2 variable output.

Ah yes, silly me. And the connections, RCA or DIN?

Rca out of NDX2 to xlr on the power amp.

Didn’t you use the variable out for a bit Mike?

Deffo get the 5si as the bit length is being reduced as volume is lowered on the ndx2, hence the poorer sound

The pre-amp itself is passive in the NAIT5i because the primary gain stage is instead made part of the power amp section. So while there is no pre-amp in the traditional sense, the power amp has been designed specifically for this. This simplifies and saves cost while maintaining a high level of performance.

I think what Mark has experienced here is typical of what happens when there’s no pre-amp between a variable output source and a power amp. You can get great clarity and detail but no real sense of drive or engagement. Also bear in mind that the variable volume on the NDX2 is not designed to be used this way and performance will be impaired, especially at lower volumes.

Right is that what’s going on!

The 5si is already ordered.

Didn’t you use the variable out for a bit Mike?

No, it was a Hypex off a 252 as a comparison against a SN2 in power amp mode. The Hypex had a bit more drive but SN2 was better with more open and engaging dynamics. But I use the variable output with my Heed headphone amp.

It’s not that it doesn’t sound good, it’s just that it needs to be cranked right up to sound right.

That’s more or less what I found, and that was into a 250DR so I couldn’t blame the power amp. Hopefully the Nait 5 will give you what you want until you get hold of a Supernait. Even a Nait 3 might be worth considering if it’s not in need of a recap….or one of the cheaper Naim preamps with your Hypex.

Yep that is exactly what I hear. No PRAT, no drive. Especially at low volumes.

I think I’ve decided that I’m not going to get anything old. With where I live, the price to send away for servicing is just not worth it. With the price of the Nait 5si, it won’t even be worth selling it after. It will be a great little back up amp to keep around. Or pick up a used streamer for a second system.

Yes, I would happily consider any of the older Naits, but only if they had been recapped as service costs would make it uneconomical.

You did well with the new NDX2 at demo price; things work out well sometimes. The Nait 5si is a really nice amplifier and will drive the speakers at least as well as the Atom and probably better. Have no fear on the mullet front - a mullet is where the source isn’t up to the amplifier and speakers. In your case the NDX2 is a very strong source and it’s absolutely not a mullet. It’s possibly to get away with a relatively humble amplifier with good speakers if you have a good source in place, so you’ll be fine.

I think it’s good that you tried it with the Hypex before spending money and at least you now know that the sound is not acceptable. Hopefully you’ll get a massive uplift when the Nait arrives, which would mean that there is no rush to save up for something better. Who knows, you may be so pleased with it that you can stop right there.