Having powered up after a thunder storm my XPS is dead - I suspect it is a blown fuse. I have replaced the fuse in the plug but it seems the fuse in XPS itself has gone and there is no spare - grrrrr!! To compound matters having disconnected the burndy and connected the NDX2 to the mains directly the on/off button is flashing in a sequence 0 -3-0. Ideas anyone? I’ve had a look at the manual but nothing obvious there. Thanks chaps!

Link plug back in ?

You’ll need to put the link plug in.

Aah - will have to find that! Cheers!!

Forgot all about that link plug as its always been powered by the XPS! Found the plug in the box and powered up successfully. Now to get a fuse for the XPS! I assume it is a fuse problem as the fuse in the plug also blew.

Thanks for the advice!

Be absolutely sure to replace with exactly the correct value of fuse(s).

Available from your Naim dealer or from RS Components.

An XPS may differ from the XPS2 so I suggest calling your dealer to confirm.

The fuse specification is written on the label on the rear at the IEC inlet.

I’ve found a place online that supply genuine naim fuses. I will give them a bell tomorrow.

Yes i agree here. A fuse blowing in the mains plug top is rather unusual.

I discovered that when I plugged the XPS back in it wasnt plugged in properly which I think was the root of the problem. I have never previously had any fuses blow on my system. Will soon know when I replace the XPS internal fuse!

Plenty of future stock here - I dread the thought of no XPS DR. OTT? Maybe, but the way things are going with global supply chains, I’m not taking any chances

I have already had the thought to get a few spare!

There is a spare in every Naim unit. Did you find there wasn’t in your XPS DR? You pull the fuse holder out a bit further and there is the spare……

Thanks David, I will have another look!

Definitely no spare and the fuse has also definitely gone to the electrical spares shop in the sky. Fortunately the glass is only cracked rather than completely blown. Gives me some measure of comfort that it is almost certainly just a fuse problem - phew!

My XPS is as dead as a dodo after replacing the fuse - back to Naim I’m afraid. My NDX2 is still very good without the XPS - but not quite as good. Difficult to identify what it is, just something missing somehow.

I’m making an assumption here (I live in North America), but is this fuse thing only on 230V units? I’ve looked everywhere and I don’t see anything where a fuse could easily be replaced.

Its to the right of the IEC power inlet…….it just prises open.See xpsdr pic below. 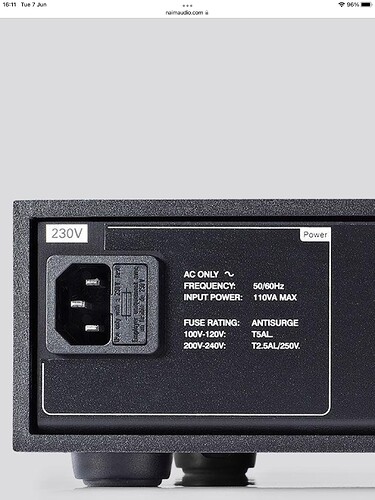 If both fuses have blown - 13 amp mains plug top especially, then Houston we have a problem…

Yes we do, back to salisbury it goes. I tried 3 or 4 times taking the new fuse out and putting it back in - no effect. It needs some time on the operating table. It will basically be serviced which although its only 6 years old is not necessarily a bad thing.

Just to be sure, you’ve replaced the fuse in the right slot

Thanks everyone - is this the right place I’ve put the spare? Can seem to close the slot now - don’t want to force it [image] [image]