I’ve been thinking about having Pluto the Retriever neutered in the coming weeks. He’s 17 months and seems to be around the recommended age for the breed. I then started thinking about why I’m doing it and is it really necessary, he’s a gorgeous dog and it’s making me feel really guilty. He’s completely non aggressive, I guess my main motivation is that he doesn’t run off after a female in heat and ultimately come to harm, perhaps been run down by a car or attacked by another aggressive male or whatever. The health benefits seem mixed, some good some bad. Has anyone been through this with their dog or able to provide any insight? Thanks

An interesting topic. I have spoken to a few different vets about this matter and their views were mixed. I have a 5 year old vizsla and in the end decided to keep him “whole”. So far no regrets.
One point that did come up a few times is that it probably won’t stop your boy chasing bitches that are in season, just maybe calm him down a bit!!

Could depend on your front window aspect.
We had a ground floor one and when left ajar he was out like a shot.
If your on a third floor apartment then he might be at risk.

We’ve a 7 month old Irish Terrier and he’s utterly bonkers right now though we’re waiting until at least 18 months. One thing we have noticed though, there’s more dogs tending to be a bit more aggressive towards him, I’m guessing theyre starting to see him more as a threat?

I breed Cocker Spaniels and have a dog & two bitches. My philosophy is - if it ain’t broke, don’t fix it. Your dog seems well-tempered so, unless he develops behavioural problems or has health issues, I don’t really see the need/benefit, and that’s what I tell my buyers. Personal choice (yours, not his!), but I’ve no plans to neuter mine when I get the bitch that he breeds with spayed later this year (she’s just had her third and final litter and my other bitch is a daughter from their first litter).

All of my five dogs have been rescues and consequently came neutered.
I think it worthwhile giving a moments thought to the hundreds of dogs in care needing a home.
I am sure that many ended up there because of similar indecision.
It doesn’t harm the dog. It might even improve their domestic existence.

I don’t understand why the male is ‘kept whole’ but the bitch speyed.

Behavioural problems that develop in dogs can often not be addressed by later castration. If the dog has a social problem taking his balls off probably won’t help.

I think it worthwhile giving a moments thought to the hundreds of dogs in care needing a home.
I am sure that many ended up there because of similar indecision.

This. Unless you are thinking of breeding him, it just seems to me the more socially responsible thing. And at the end of the day, if his behavior is a bit better, that’s even better.

Of course, this whole discussion brings to mind one of my favorite movies: 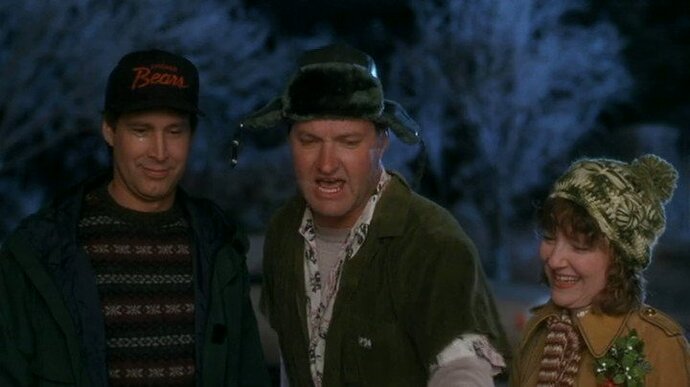 This whole male thing is tired…reflects the owner’s insecurities more than the dog’s. Why, as @Nick1940 said, spey the bitch but keep the male “whole”…

I had several dogs (three Shih Tzus) at the same time we had the bitch spayed and the dogs neutered. Both lived a happy life to 18 years.

The rationale was not just the unintended breeding - that could possibly be addressed by just dealing with sex or the other. But for their own harmony, having just the bitch spayed and then the other dogs still having the urges of nature bothered us and the bitch. With both treated, they frolicked and played like sibling puppies (they were not) for the rest of their lives.

We rescued all from some unscrupulous breeders that were in it for show dogs and any that didn’t make the cut genetically were somewhat abused. To me, the dogs were family members and as such we felt responsible for their wellbeing as well as the well being of potential offspring that we were not prepared to take care of (three was our sanity limit). I dare say if there had been more, those dogs, us, or both would have suffered for it.

FWIW, they were in and out of the vet for the procedures in no time and recovered fully in a few weeks. I never once got a sense that they suffered as a result.

I have a mixed Collie, who was neutered at 10 months, which was the recommended age at the time, nearly 10 years ago. I live in a rural setting and he is off the lead most of the time.

He still can be aggressive with entire males when he / they are on lead, usually he just avoids them. But he does not worry bitches in the village or when in town.

There are more than enough dogs around so I was not planning to breed him. However, my brother has just bred from his bitch and kept a dog, he is considering when / if to neuter the puppy. The caveat for him is that his dogs have a very good line so breeding is a prospect.

In summary there does not seem to be a right or wrong answer because it depends on the circumstances.

Always rescue dogs for us, always neutered. Far too many dogs in pounds and euthanised due to unintended pregnancies. If you are a responsible breeder that’s a different matter but if not, why keep him whole but deny his natural instincts and risk frustration becoming aggression. He may also appear more threatening and therefore a target of aggression for other male dogs.

Some vets think neutering helps avoid the risk of cancer in later life.

I live in a fairly remote & very rural area populated by a very high proportion of dog owners. My dog is the gentlest soul you could imagine as are, apparently, all of the male progeny he and my breeding bitch have produced. It really isn’t an issue at all.

I find this hard to understand.

Why spay the bitch and not neuter the dog?

If your dog gets out, some other poor soul’s unspayed bitch will get pregnant.

Two of ours (Twig & Luna) are from Battersea. They neuter and spay as a matter of course. The reasons they give might be helpful;

Dog neutering is a simple operation that has numerous health and wellbeing benefits for your dog, as well as stopping any unwanted births.

Our third, Louby-Lou, was rescued from a puppy farm and she had been so over-bred so young that she was close to death and had to be given a hysterectomy. You’d never believe it now - she’s 13 yet has the energy of a dog a fraction of her age.

Lots of reasons, all of them good. However I don’t have the enthusiasm to justify my choices here; not for the first time on this forum I regret expressing an - informed, if not to your liking - opinion. I shall allow others to continue this fruitless debate without me.

He’s completely non aggressive, I guess my main motivation is that he doesn’t run off after a female in heat and ultimately come to harm

This is a very good reason, boosted by the additional and frankly most important benefit that he won’t get someone else’s bitch pregnant.

The whole concept of happily neutering a female dog but not a male is utterly ridiculous, like morons who won’t have a vasectomy ‘just in case I get bored of my partner and want to knock up a new woman’. There are far too many dogs around and the more that are neutered the better as far as I’m concerned. ‘He’s a lovely boy and I want to keep him intact’. Total bollocks. Pun intended.