Seems JL are scrapping this ‘policy’ later this month.

I’ve had a JL partnership credit card for a few years which I quite like for the gift vouchers you get though I think the ‘points earned for spends’ are far less generous than when I first got it. Seems this card will be shifting from HSBC to a company I’ve never heard of.

Then we have the complex Waitrose rewards scheme.

Lots of changes, makes you wonder if something is up or just a vigorous shake-up…

Most probably the most complex, confusing and frustrating reward program created. Have both and never really used them.

Pete – gives some detail. A stand-out in the UK grocery and (withering) departmental store market in being owned by its employees. I thought the pricing pledge had gone by the wayside some time ago. What was once described to me as the UK middle class equivalent of Harrods. 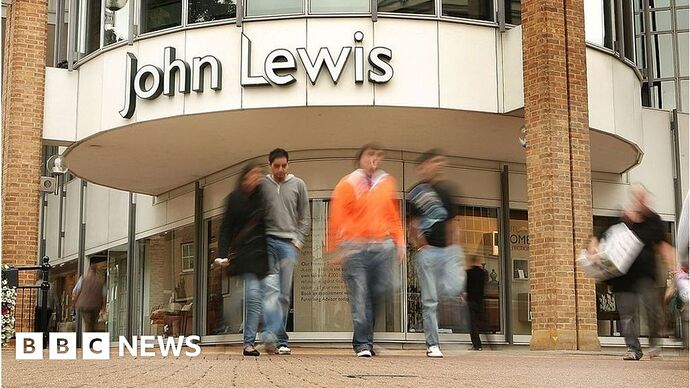 The retailer says it will abandon the promise in the summer and instead spend £500m to keep prices down.

My understanding of all those pledges is there’s always wriggle room. We have several major stores that promise to not be beaten on price, but I don’t know anyone that’s taken it up.

To be fair, they used to be very good about it, and their service and product guarantees differentiated them from other mainstream retailers, especially in electricals. They had immense brand loyalty from many. But competition for things like commoditised electricals is so intense nowadays that I’m not surprised by this news. The Waitrose supermarket brand has always been premium priced.

I have a huge degree of affection and loyalty for John Lewis because I have had nothing but exceptional service from them. I once purchased a £1500 Sony Vaio laptop from there and it proved to be a very unreliable machine indeed. By the time it was 14 months old it had been back to Sony three times and their service dept were so poor that it was away for around 6 weeks each time. When it failed a fourth time I wrote to John Lewis about it and they phoned within hours and asked me to bring the laptop in at my convenience to receive a credit note for £1500 towards anything of my choosing in the store including another laptop.

You don’t get that level of service from the box shifters!!

Ever since John Lewis have been my first port of call for all white goods, laptops, textiles, furnishings etc. Waitrose also feature regularly in our food shopping because frankly along with M&S their food is simply superior to the other chains. Interestingly I do also use Lidl for staples like fruit/veg/rice and that helps to offset the cost of buying quiche/ready meals/meat etc in Waitrose. The overall cost of that combination is probably cheaper than Sainsburys, Tesco or Asda but we eat a heck of a lot better - in fact I find Lidl dramatically higher quality in fruit, hams and pasta than Sainsburys who seem to specialise in selling the poorest quality produce at middling to high prices…

I hope that JL can continue to thrive in the cuthroat retail environment, I like buying from stores that look after both staff and customers so purposely avoid those like Sports Direct that don’t.

Retail is not a good place to be at the moment and hasn’t been for some time.
My cousin lives in the west Midlands and confirms the John Lewis store in Birmingham, England’s second city?, has been closed for some time.
My laptop is falling apart literally and JL is the place I would buy from even if the price was more than the internet or the box shifters.
Service to me means more than chasing all over the place with a product defect.

We have finally got to grips with the Waitrose reward scheme. We occasionally buy expensive things from Waitrose, say a pack of four Oral B brush heads for £18 or a £15 bottle of wine for a special meal. The trick with the vouchers is to choose the most valuable ones each week. I mention the brush heads and wine because we have recently had a £5 voucher off each of them. But you don’t need to buy the actual item, you can use them against anything. Whether Waitrose will stop this eventually I’ve no idea, but for the moment it’s a nice way to make a saving.

We also have a John Lewis credit card, which we use in Waitrose and also for petrol and household items. We recently put about £8,000 of furniture on it, and while that gives a modest £20 in vouchers, it’s better than a poke in the eye.

I think what did for the undersold pledge was closing down sales at House of Fraser and others. John Lewis were forced into matching fire sale prices, which was simply unsustainable.

This loyalty thing is exactly what I get from my Naim dealer, I’ve made a few mistakes (one just a week or so ago) over the years and I’m always able to return it at no loss. We certainly don’t have the kind of department store you have a relationship with, it’s just best price (and stock these days). We’re lucky to have good consumer laws that at least keep them at accountable.

One of the issues many retailers face these days is stock availability.

We wanted to buy 6 plates, 6 bowels, 6 dinner plates etc. Went to two JL stores only 1 or 2 pieces in each. Purchased all on line and arrived a day or so later. Hadn’t realised you had to put all the pieces togther to make a complete set (it arrived in hundreds of pieces).

JL were great, no quibble, reordered to a Waitrose store for collection, all arrived better packed and complete.

… The trick with the vouchers is to choose the most valuable ones each week. I mention the brush heads and wine because we have recently had a £5 voucher off each of them. But you don’t need to buy the actual item, you can use them against anything. Whether Waitrose will stop this eventually I’ve no idea, but for the moment it’s a nice way to make a saving.

…We also have a John Lewis credit card, which we use in Waitrose and also for petrol and household items. We recently put about £8,000 of furniture on it, and while that gives a modest £20 in vouchers, it’s better than a poke in the eye…

Yes, currently we are able to use the ‘best’ money off vouchers just to get a discount on the overall bill.

Someone mentioned this to me in store ages ago, and I think we discussed it in an older thread.

So today used £4 off chicken breast fillets which I actually bought and £4.50 off a thick sirloin steak which I didn’t. I think they are lax currently as when I queried the faff of choosing vouchers each week and something was out of stock the email response suggested to use the voucher on a similar product if the actual one is not available.

I’ve recently taken to doing screen grabs of my ‘card’ and vouchers and scan this from Photos rather than fiddling with the app.

As for the JL rewards, little things add up but I used another payment method yesterday as the £6 worth of points wasn’t worth the hassle on that particular card.

The problem with trying to get the bargains at different stores is inevitably when they are out of stock and you end up going elsewhere.

Shifted some stuff to storage earlier, and nipped no a nearby Tesco as the kids enjoyed their chicken tikka bbq items last week. None in stock so went to Waitrose, though still spent £50 in Tesco. ***

Another £50 spent at Waitrose but they didn’t have the large chicken tikka on the bone kebabs we’ve enjoyed before.

Next stop was Aldi, primarily as they seem to have the cheapest organic milk 4 pint bottles - of course none there, but somehow managed to spend £90 - at Aldi for heaven’s sake! Several steaks for the BBQ and lots of cold meats as I thought we’d run out of ham etc, naturally I find some ham hidden in the back of the fridge when I unpack! Mrs AC has a knack for using all foodstuffs with the best use by dates first rather than the oldest first or hiding things that will go off where you can’t find them.

I took a load of credit/loyalty cards out of my wallet the other day.

So stood in the checkout queue at Tesco I launched the Tesco app - infuriating!!! It had ‘logged me out’ for some reason.

Struggled to find an email from them to identify the relevant email to sign in and thought ‘phew, in the nick of time’ as the customer ahead of me paid.

Oh, no, hardly that easy, thanks Tesco and your F***wit app design.

So, I’ve left my card at home because I have your app. At the checkout I have to login again for some reason, and am then told to enter characters 11,12,13 from my Clubcard which I don’t have as I’m using the bloody App you fools!!!

My free coffee and cake reward at JL Bluewater ended up costing me £75.10 last Friday, as I was seduced into buying a Musto parka at a very reasonable 70% off original rrp. I’ve never taken advantage of their now defunct never knowingly undersold proposition, but they do have some decent reductions at times

The current card is managed by HSBC - I’d imagine HSBC might offer those with Partnership cards a straight swap over to one of their products.

Odd really, many people could be caught out if they don’t pay it off monthly should HSBC not do this as I can’t quite see the new provider just taking on the debt managed by HSBC especially if you have to apply for a card again. I can really see this being an own goal for JL, as many just won’t want an extra new credit agreement on their credit profile even if the old one is closed.

I must admit that the Partnership Card’s phone support (seems to be in Asia) is one of the most awkward services I’ve ever used staffed by some very uppity ladies unless something is missed in translation so to speak.

We only have a partnership card because we get vouchers for Waitrose and John Lewis. I assume that the new provider will have a similar scheme, but getting everyone to apply for another card when the current one is perfectly fine seems a right pain. The card is in Mrs HH’s name and she has a healthy credit limit, from when she worked. Now she is retired and earning very little I can’t imagine it would be anything like as generous. We always pay it off but it’s useful to be able to buy big things and get lots of points.

If the new provider of the partnership card is competitive I will stay with it, otherwise I’ll walk…