Haha! I hadn’t populated my favourites of anything enough to invoke the “more” button, which then takes things to the next level in the file structure which then shows the “a-z” button. Thanks for the help @pcd. Having looked at it I’m not sure it was worth it for me. Hope others find it more useful.

Well my radio station order has defaulted to last added which is annoying, I now have to make two key strokes to get to stations I mostly listen to. It looks like this might be addressed in the next firmware issue which allows presets and drag n drop, I live in hope!

It’s not there with muso or Qb gen 1 anyway.
Best
David

That’s just adding another layer, I believe the correct way if you want to contribute is to join the beta group.

Thanks very much. I’d sorted it from your first answer but I’m sure that will help others.

Drag dropping radio stations doesn’t seem to work for me. Neither my Star nor Qb’s seem to allow me to do this. That would have been the one useful thing of the features described.

It did mess up my radio paradise icons which now instead of the logo show ‘O PA’, I guess a part of ‘RadiO PAradise’. Anyone else have this issue?

Any news on a lock screen widget for Android to get it functionality wise on par with iOS ? That would have been really useful.

When you look at favourite albums for instance you have the two icons on the right hand side on the left of these you can see an a-z option press this and a list of the various options will be displayed.

The a-z option has disappeared and albums back in the order they were ‘favourited’…irritating.

Just checked seems only to work when you select the favourites option on the app and not when you browse via the Qobuz option it is the same on the release app and beta version maybe it is something that Naim can look at?

@elverdiblanco, if you have an iPhone, you can display the song on lock screen by swiping right 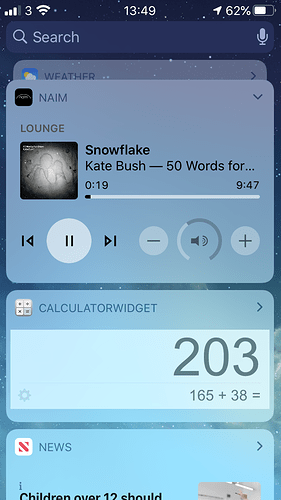 That’s how it works in every other music app I’ve used on Android so if they have done it for IOS it shouldn’t be difficult to do it on Android too.

completely agree on better highlighting of current track. on a sunny day it is almost impossible to see the highlighting - i understand subtle but visible would be better.

Even just having the text in a different colour would make all the difference. As you say depending on the lighting it isn’t always clear

For some reason I can only see iRadio presets in the star/favourites input in my iPhone XR Naim app (5.17) but can see all my iRadio/Tidal/UPnP presets and favorites in my iPad Pro Naim App (5.17).

Anyone else notice this?

There are some issues with the latest update on iPad/iPhone. Shuffle doesn’t always shuffle when I change track on device but works when using the Naim remote. Also going into favorites and chosing and album track make the app jump to the overview of music categories. Not sure what kind of improvement developers think it is to list 10 albums and then have to click more. It means I need to do more clicks than before to get to my fav albums. Simplicity please!

I agree simplicity rules! I wonder what the new update will bring soon. Surely it can’t get worse…can it?!!

I was wondering the same myself, if there is any channel for feature requests in future versions of the Naim app?

Naim took away the feedback/suggestions functions in the app a while back. The official Naim line is that you should make the request to Naim support and they will pass it on to the developers.

OK thanks, I may well just do that.