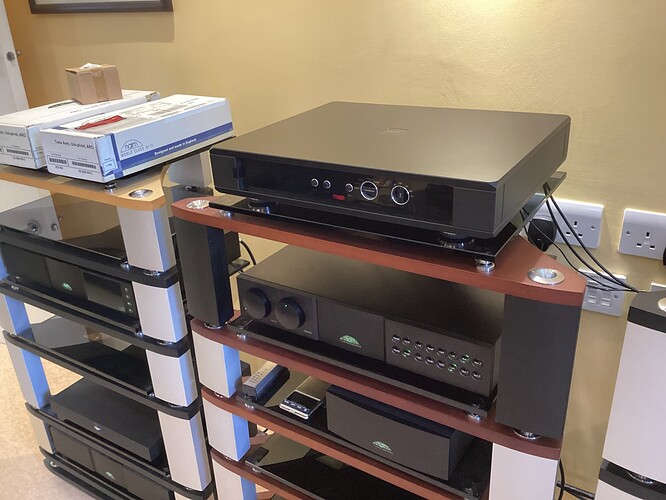 Cartridges – all on NAIM Aro arms 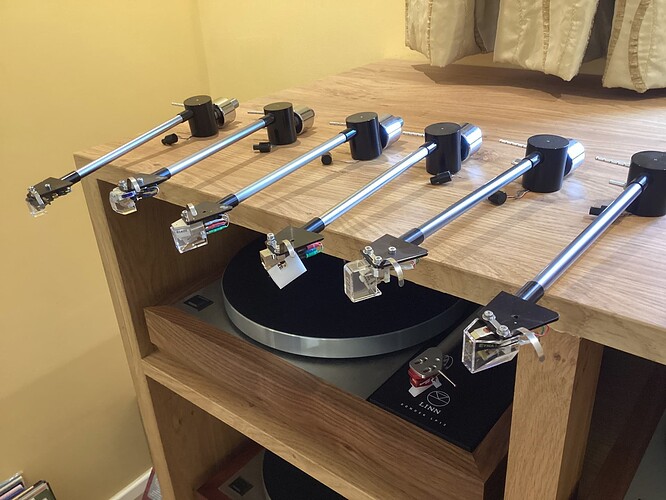 firstly, I think it’s fair to say very few UK or even World dealers could offer the experience we enjoyed yesterday at Cymbiosis - being able to demo a reference system which had so many options was a delight

Kendo great new cartridge drive, detail & focus Krystal - lovely Kelos SE - loved the detail and its relaxed manor of delivery of music - DRV V1 s - superb cartridge moving back and forth gave us all a good chance to hear the cartridge 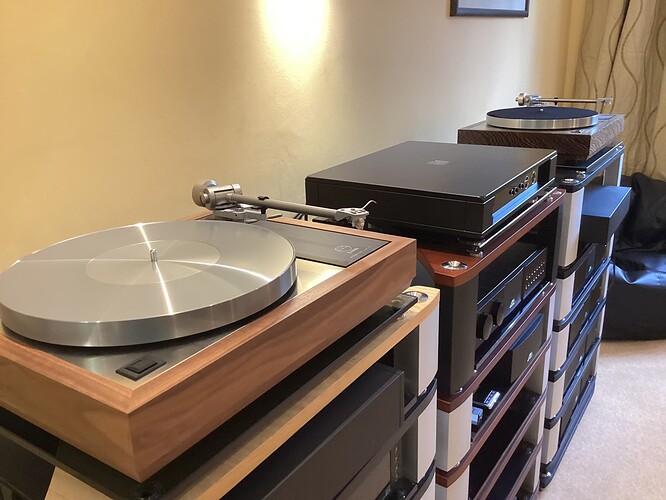 2 again same deck to show difference between Akrute 2 and Kilmax 2 - Akruate 2 is lovely the Kilmax is a game changer in musical focus, delivery, depth and soundscape - Paul choose one of his reference Albums Solid Air John Martyn

as you would expect with the £££ these cost something on a wish list for me my preference Enta, DVT v1s Ekstatik - IMO the Lyra was in a class of its own

then next up was so show the Aura vs Linn Urika Phono stage, so I should of said up until now all demos on Aura phono with Linn PSU

Album was a on one of mine Gerry Rafferty Night Owl - which on reflection was not well recorded - to the point when first played with Aura I almost asked Peter to take off - however we did stick with it, this is when the two musical presentations showed well - Aura slightly bright more forward - Linn more relaxed delivery - what Peter did show and boy did it show - put a Collaro mat on deck and it lifted the musical performance for sure - certainly the cheapest upgrade on todays list

So, my goals from today - do I look at Aura to replace Urika in my deck to work with Kilmax Rad 2 - no to be honest as good as the Aura is I was not a fan of the musical presentation and the way it presents the music, but that is IMO and I know a few members on here love their Aura

could I justify Enta???.. but Kelos SE is right in the mix I have always loved the DV range so DRT 1s (and I would get trade in on XX2) saying that Kendo is a lovely cartridge

Sounds like a very interesting afternoon. I also run a XX2.
A couple of years ago I did listen to some other cartridges in the XX2 price range to compare and see whether I preferred any to the XX2.
There was a Lyra,Hana&Linn Krystal but in the end I preferred to stick withXX2.
I am not looking to jump to the level you are considering.

Thanks for the detailed summary Antz, wish I could have been there myself but whenever I turn up in Rearsby I inevitably leave with empty pockets

Would you say the session concluded with any firm opinions on which was the best combo? I run an XX2 on the end of an ARO myself, I’m nowhere near the stage where the cart needs replacing or upgrading but it’s still good to know what consensus is from other LP12 owners. I agree with you about the mat - one of the best pound for Pound upgrades available and less static-prone than the stock Linn one. Can’t comment on the Aura, though I had an Aria before moving up to a Vertere and that too was a bit forward so perhaps that’s just the Rega “house sound”?

@Jonners I am with you on the pockets front

for me from the day, I don’t feel I need an Aura in my system to replace my Urika 1 as phono, liked Aura but a little to bright and forward presentation for my ears and thats with out gain

if you have the £££ Lrya Enta Lambda is a cartridge that has been sent from the heavens - what musical delivery - we all just sat back and say WOW!

in the mix for me now around my budget to move on from XX2 Lrya Elos SE, DV DRVT 1s & Kinn Kendo all of which are lovely cartridges and work superbly well with Urika - also bring into the mix my Stiletto hope to be able to look at this in April of next year

Perhaps we should hope that Naim may release the ARO2, from the Solstice, for sale. Maybe just to special order…?

Crikey. That array of Aro arms is something else. Sounds like an amazing experience! Thank you for writing it up.

Sounds like a great day. I currently run a Rua, XVS must be an option

Hello, Antz, I recently upgraded from an XX-2MkII to a Te Kaitora Rua, which was a big step up in performance. I haven’t been able to listen to it much yet, but it’s lovely.

Personally, I find the top of the range Dynavectors too ugly (as well as very expensive), and I’d get no joy from sitting watching them while listening. In any event, the TKR provides a hell of a step up in quality for a relatively manageable price.

Now, if I could find a fresh out of the box Linn Troika, that would be a dream. Probably the sexiest cartridge ever made!

Peter really does run a class act out in the sticks there and I can think of no other Linn dealer with the choice of decks, arms and carts in England who also puts these sort of themed events on. I know I wouldn’t have bought a new cartridge had I attended but I can almost guarantee I’d have come away with something, such is the choice of kit he’s got in stock.

Glad you had a good time and look forward to seeing the final outcome.

Cymbiosis are really good, spent many a happy hour and money there.

I think the Dynas look great.

When our XX-2 finally wore out, I went to buy a DV XV-1S but ended up very happily with a Hana Umami Red. Having said that, a Lyra Etna SL is really quite something else!

Yes, it would good to have a comparative review of the ARO and the ARO 2, explaining the differences between them, plus a ‘subjective’ account of how the two arms differ in terms of sound when using the same cartridge, etc.

I seem to recall that one man (or woman?) in Salisbury was responsible for building all AROs, and that only around 1,600 were ever built. The arm has a hell of a reputation for a product built in such low volumes.

a comparative review of the ARO and the ARO 2, explaining the differences between them, plus a ‘subjective’ account of how the two arms differ in terms of sound when using the same cartridge,

I think there is a man near Leicester who could provide those insights.

@Antz
Sorry I’m being a bit thick…how did the Linn carts stack up vs each other?
Seems the Lyra stole the show, but that is presumably way outside my payscale.

I have Kandid, had Krystal and am contemplating (eventually) Ekstatik - or stick w/ Kandid/back to Krystal depending on future finances!

By the sounds of the issues getting anything other than the Equinox to fit, I’m rather glad.

I’ve never heard that. Are you sure? I thought that the dimensions were almost identical, or is there some other factor involved?

It’s just too heavy. The LP12’s back spring is practically bottomed out with an Ekos SE and the ARO is even heavier.

Also not available separately, unless you wish to cannibalise a Solstice.