A power strip with earth connections would be a good place to start.
Are those plugs 2 pin C Type or 3 pin J Type

I would start by unplugging everything and just starting with the Atom. Make sure you have a proper earth and polarity is correct. Once you’re happy, then start to add other bits of kit, again, ensuring that anything that requires an earth gets it and that polarity is again correct - you may need an induction pen to ensure this.

Thanks Mike!
Since I’m based in Switzerland, they are J types… I googled quite a lot of powerstripes but they all seem to be in Shuko style… no J type style…

You may have more than one issue, but this part,

I can exactly tell you where the music is coming from (even which speaker is playing). I don’t get that 3d (sounds stupid) effect at all when listening…
The sound is not “in the room” its at the speakers (hope you understand what I mean).

sounds to me like room acoustics issues and not the comparatively small differences one gets between amps. You played with speaker placement but I guess it may have not been possible to play with the seating position, which is at least as important. You are sitting very close to a blank back wall, so you will have lots of very early reflections from the back, which inevitably play havoc with imaging.

I would have also blamed room acoustics for the missing bass - if there isn’t a severe mismatch between amps and speakers, there are bass quality differences between different amps, but any reasonable amp won’t make the bass disappear. They all have an essentially linear response close to 20 Hz.

However, what you described confuses me. You wrote that the Atom has a “lack” of bass, while the Vincent has “way better” bass. Those are different categories, one is about quantity and the other about quality, so it’s hard to imagine from afar what it is that you are hearing. If you have the subwoofer in the mix, maybe there are phase differences depending on its settings and its interaction with the different amps.

As was previously suggested, I agree with going back to basics. Your setup with the sub and so on is complex and makes it harder to figure out. With competent speakers and amps it IS possible to achieve ok bass. Once the basics work, improving it with a sub will be much easier

You need to adjust your tweeter level. Please trust me and do this. Troels will recommend 3 choices. Increase the resistance to the highest option and then reassess. My last two pair of speakers have needed to be used with the highest resistance option (lowest tweeter output). If this doesn’t work then I worry you have made a mistake somewhere. Troels’s speakers should disappear and image very well with a lovely natural and balanced sound. Once setup right. 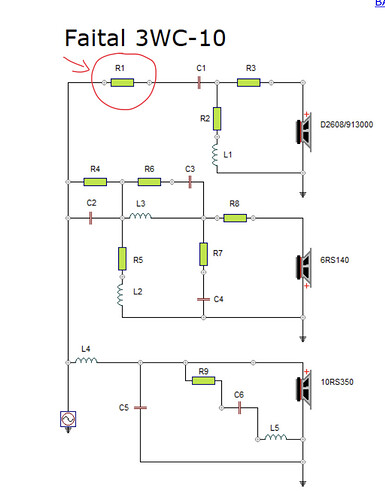 The one thing that worries me, especially since you have imaging issues is the edge/Lip that you have on your speaker around the cabinet. Troels’s front baffle is flat. The diffraction will mess with the sound. How much, I don’t know but when you deviate from the plan you are taking risks. The bass issue I believe will be resolved by the tweeter adjustment by bringing everything into balance but the imaging issues could be related to your cabinet edge. 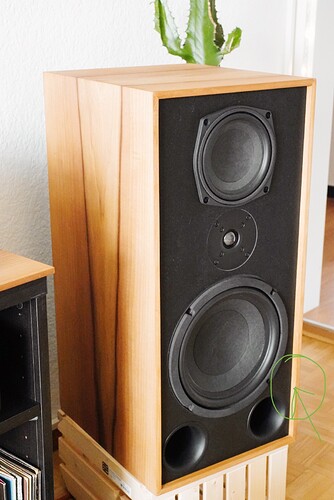 hello everyone!!
I think I found the reason why I dont get a soundstage

again small update for you from my side:

I was busy the whole afternoon changing the resistor R1 alternative and checking the crossovers again. Let me tell you @Mark84 what a difference it made to the bass!! I mean… how is this possible? The bass is way better now!!! so much more enjoyable! and also the tweeter merge way better with the rest of the speakers (it’s not night and day but
noticeably better).
A step closer to the finish line for sure

I do have a problem with one speaker…
My brother noticed it… we where listening to different songs after changing the R1 alternativ.

He told me to set the balance to +10 and than to -10
And than I understood what he meant…
One speaker is louder, more “open”, more “dynamic” (I’m really bad in sound describing… lets just say… one speaker was very good !) and the other speaker is very “in the background” not dynamic… You can clearly hear the difference if you change the balance from one side to the other.
BTW I tried a mono song from Beatles… so both speakers should sound the same.

I checked almost everything…

In the end i checked the crossover boards again… they look the same on both speakers… since this is my first diy speaker, the crossovers do not look like it was made by a big brand or something

but they should work I think…

It’s so frustrating right now … I know this is off topic, and sorry for that, but is there a way to find out where the problem is coming from? can I measure the speakers somehow?

many thanks for your help guys!
Really appreciate this community here!

A bit of a faff, but what happens if you move the left speaker to the right and vice versa?

I am glad the resistor change has made a difference.

The treble level of the tweeter is what really dictates your listening comfort level. By reducing it, you will raise the volume on the amp and in turn will raise the level of the bass and mids bringing things into balance. You need to try the different options until the tweeter disappears and you no longer hear treble. Just nice smooth music. Or whatever pleases you.

As for the speaker, I’m not sure what your options are. You can go over it again and try to find your mistake or maybe send a detailed picture of the crossover to Troels.

My guess is that you have missed a link or something simple. If possible, change the crossovers over and see if the issue persists in the same speaker or switches to the other narrowing it down to the crossover or a driver.

Tried that aswell. I can tell exactly which speaker is the „good“ and which is the „bad“ sounding

Oh, yes, saw that now. As Mark said, you could try switching the crossovers - even more faff, but what can you do

even more faff, but what can you do

Yeah, It’s really the only way forward. You need to isolate where the problem is. It could be a faulty component but first you need to narrow it down to the crossover.

I have designed & rebuild a lot of speakers over the years & I’ve always used a SPL meter with a tone generator.
I can’t imagine doing anything with drivers levels & crossovers changes without this.
And reading those last few posts, you are in bad need of this. First thing I would do is check & double check both your cover circuits & components are wired & installed exactly as per Troels schematic.

I just checked the appstore just for fun if there is an app for this around… in fact there are hundreds!

I know the microphone of an Iphone is by far not a standard to measure the speakers… bht check this out: 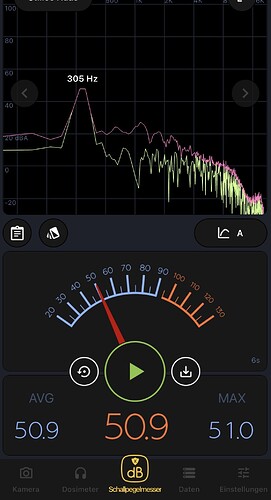 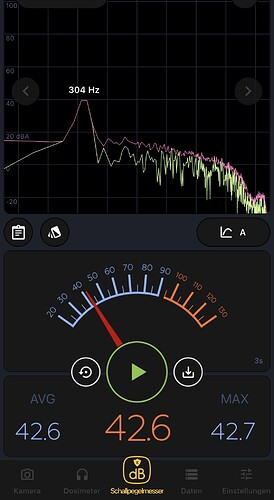 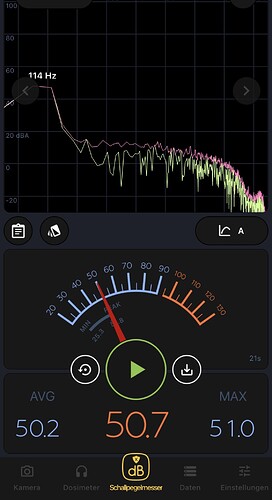 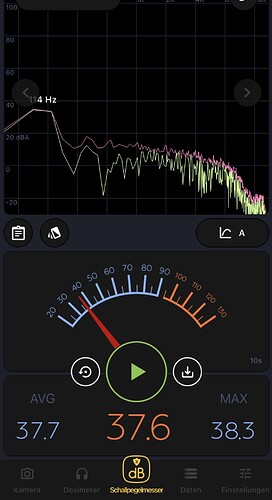 One speaker is noticeably louder!!! There must something really be wrong when my iphone can hear the difference….

Ohhh no…. Lets do this all over again…
I‘m even thinking of doing the whole crossover from scratch again….

With which frequencies should I do the test?
Do you have a tipp for me @Mike-B

You could try frequencies that are right in the middle of each of your chassis’ ranges, as defined by the crossover frequencies

Thanks ! But Sorry @Suedkiez thats to advanced for me. Can you tell me the same thing in other words (for someone who doesn’t understand

Your crossover will split the sound into different frequency ranges for the different drivers. So the bass driver will go to, e.g., 90 Hz, the mid driver from 90 to 2000 Hz, and the tweeter takes over at 2000 Hz. The splits are of course not sharp, but there is a slope.

So if you pick frequencies that are not close to the handover frequencies, you should be able to find some that the crossover sends exclusively to one driver.

I use 1/3 octave white sound tones to plot the levels.
See the graphic pic. This show open field (no room) plus close mic in room that shows better how the room affects the levels
This can be developed further to show each individual drivers rise & fall.

After this it gets complicated moving into electrical impedance. 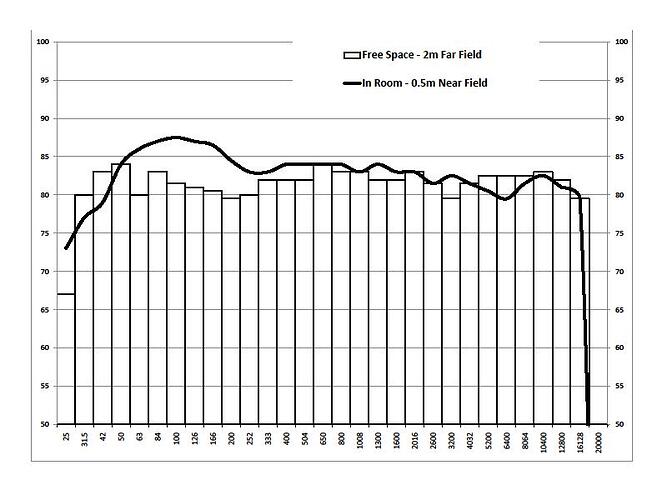 @Retm, there’s really no need to be messing around with a tone generator, you know something is wrong as you can hear it. Troels has already done the hard work and developed a good crossover. All you need to do is make sure it’s wired correctly and you’ll be fine. I recommend to get the crossovers out of the cabinet and study them for a mistake. If you can’t find anything then contact Troels and Michael from Jantzen and send some pictures of your crossover. They are really helpful.