I’d been ripping steadily for a few weeks so have most of my favourite albums saved in lossless FLAC and attached via USB. The player also has a wired ethernet connection via normal home networking equipment (no snake oil expensive cabling).

From purchase it was left running a radio stream to start the run in process and also used to listen to TV via Toslink.

My first observation from switch on was the price was justified. I’ve been listening to my trusty CDX 2 for 14 years and thoroughly enjoyed every minute of music, but the NDX 2 instantly improved all aspects of the experience. Over a week in and I am now beginning to relax into listening to the music and ignoring the urge to press NEXT.

Without describing paragraphs and paragraphs of thoughts, I’ll just mention some well used words; near silent sound floor, sound stage, timing, a near live listening experience and control. I’ve had occasions when the CDX 2 sounded as good, but the NDX 2 has been constantly great. To say I’ve been blown away is an understatement.

I’ve also come to the realisation that TIDAL is probably going to be my main source. I’ve spent a few hours comparing physical CD against rip against TIDAL HIFI. Every time, TIDAL is either the same or better than both CD and local rip. I’ve also compared some Qobuz Hi-Res downloads against TIDAL and can discern no real difference. Whatever those TIDAL guys and girls are doing, the service sure sounds musical and engaging. Apple Music viaAirplay also sounds great even with the lower quality stream.

So far not one drop-out, pause, streaming wait or any other issues with any of the sources. Testament I would say to solid and secure software. Chromecast occasionally drops from the iOS TIDAL App but that is not a NAIM issue.

I’ve also started to listen to the NDX 2 RCA out driving my STAX 006t and a pair of 404’s. Quite incredible. Again, over 10 years of using the RCA outs direct from the CDX 2 and the improvements are amazing.

The only downside; on removing my Hi-Line from the CDX 2, I somehow broke the amp end of the Air-PLUG. It is still usable but obviously requires a repair. Question for the forum; is that something NAIM can do? 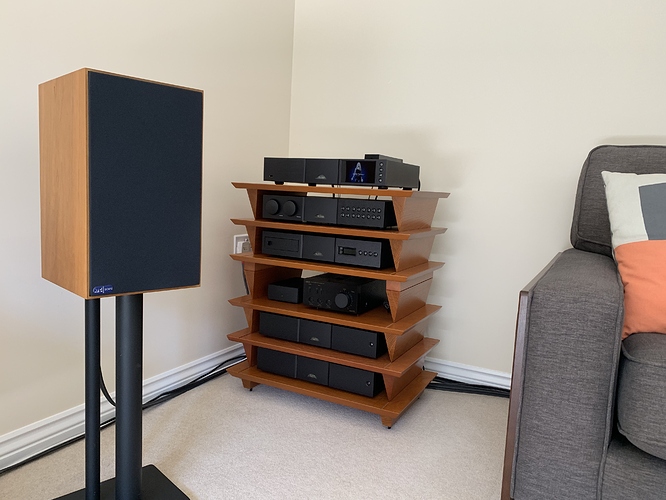 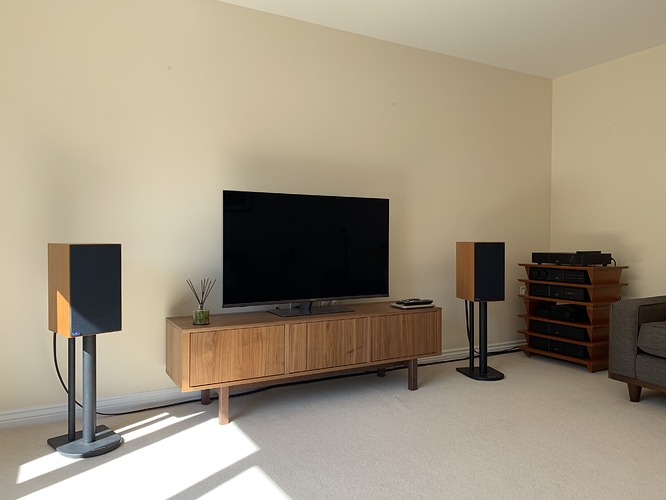 Yes, Naim should do a free repair which you can arrange via your dealer.

Looking at your picture makes me wonder what you have done with the spare cable from your right hand speaker. The best thing is to initially run it to the right of your rack and then back again. This avoids curling it up and should sound better.

Ta for the advice on the Hi-Line. The speaker cable is exactly the same length. All the extra is concertina’d under the sofa just in view on the right. But thank you for asking the question. Top tips are always welcome.

That’s a really nice post DJ. Sums up why you would move from a similar CD based setup and some real world observations.
Exactly the sort of thing I don’t need to see, but I will resist for now

I’ve also come to the realisation that TIDAL is probably going to be my main source. I’ve spent a few hours comparing physical CD against rip against TIDAL HIFI. Every time, TIDAL is either the same or better than both CD and local rip. I’ve also compared some Qobuz Hi-Res downloads against TIDAL and can discern no real difference. Whatever those TIDAL guys and girls are doing, the service sure sounds musical and engaging. Apple Music viaAirplay also sounds great even with the lower quality stream.

Nice one @dazjones, Iam glade that you are enjoying yours as much as I am enjoying my 6 weeks or so old NDX2.

I compared rips to tidal and used to find the rips sounded a bit more solid but that was using my Oppo prior to buying the NDX2. I have compared tidal on Naim app vs Roon but I will have to re-assess rips through NDX2 vs tidal via Naim app.

I definitely prefer the new set-up, and I have no regrets selling the NDX or the Naim DAC.

The NDX 2 is a fantastic sounding network player.

I will say it again: The NDX 2 is a fantastic sounding network player.

I forgot to add my CD collection is also collecting dust… lol!

It has been so long since I played a CD I forgot I have a couple of thousand of them.

Congratulations. I heartily agree with your thoughts, being 3 months in to my NDX2. The very low noise floor and detail retrial were my first 2 wows! Later followed by the sound stage when I fine tuned my speaker positions. I also tried some Tidal recently and thought, wow, I hadn’t heard it sound that good! I just go back and compare against some rips on my Core to see of there is a discernible difference.

I’m glad you’re enjoying the NDX2 Dazz it’s an incredible piece of kit. Like you I’ve ripped my favourite CD’s onto a USB Flash drive but mainly use Tidal Hi Fi which is cabled directly into my Router, I’m more than happy with the sound it produces.

My NDX2 is coming up to a year old in the next couple of months, and the enjoyment it’s bringing me, especially with the abundance of musical choice is second to none.

All I will say is, if you’re ever in a position to stick a 555PS onto it, it really will blow you away even more, and to my ears brings it very close to the ND555

@anon18346185 as a CD555 user I was interested in the new range of streamers so arranged a demo of bare NDX2, NDX2/555PS and ND555/555PS. I agree with you in that to me there was not a great deal of difference between the NDX2 with the power supply and the ND555, probably not enough to encourage me to pay the extra. It would be interesting for me to also compare the NDX2 with the CD555, both with the 555PS of course. The demo also reminded me just how good the 555PS is and how much difference it makes.