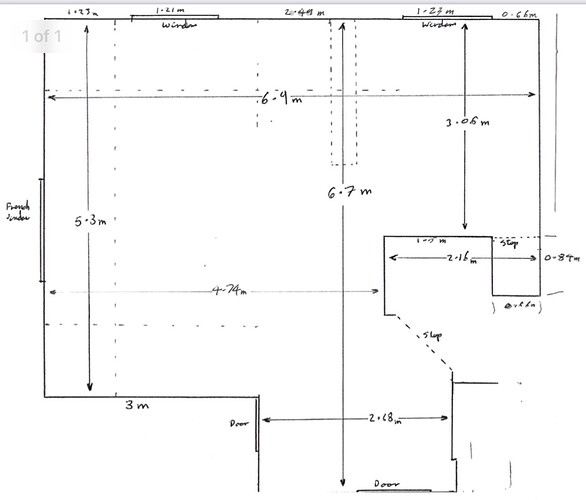 We’ve now moved into our house from the flat in Montpellier. The NBLs really liked the flat so as I don’t have boxes for them and we’re keeping it for now I’ve left them behind, along with my old CDX2/282/HC/250-2 and some Fraim lite. The walls in the new room are plasterboard throughout so I’m not sure the NBLs would be happy here anyway.

For now I have some Allaes to be going on with while I look for my final speakers. On the plan above the area to the top right has a dining table in it but the area to the left is mine to arrange, complicated only by the French window on the left, ignore the dotted rectangle, though it could be an alternative location for the record racks.
Sitting facing the French windows is a possibility and would allow for symmetrical speaker placement in relation to the corners but it feels wrong somehow so I’m thinking of facing the top of the plan. The record rack is already against the 3m wall on the bottom left.
I’m looking for speaker ideas, the search is complicated by the lack of home demo culture in France. One requirement is that more than one person should be able to enjoy the music at the same time and when it’s only me I’ll be sitting a bit to one side so a broad sweet spot is a requirement and I’d also like a good impression of scale with symphonic music. One way of getting this is omnis, my first thought is I might have enough space for some Duevel Sirius. 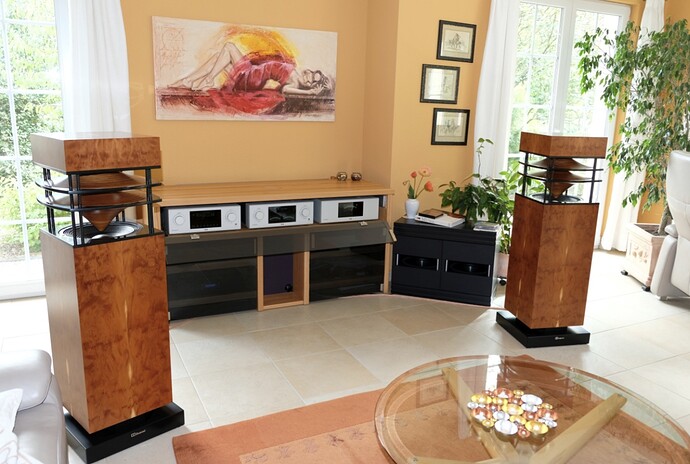 I’ve heard Duevel Bella Lunas at a dealership in Paris but he thought Sirius needed 60 m sq not to overload the room, he suggested German Physiks HRS130 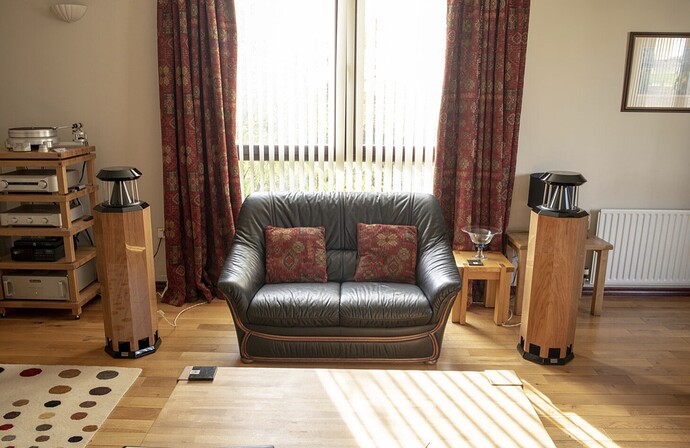 but that was with an estimate of the room volume of 48 sq metres from the estate agent, in fact it’s actually 36 now I’ve had a chance to measure it myself. The drawback is that they require at least a metre from the wall and German Physiks suggest a symmetrical relationship to corners along with a listening distance 1 1/2 times the distance between them, further investigation is needed on these. I’d like to hear the Unicorns too but not sure I get approval for them. 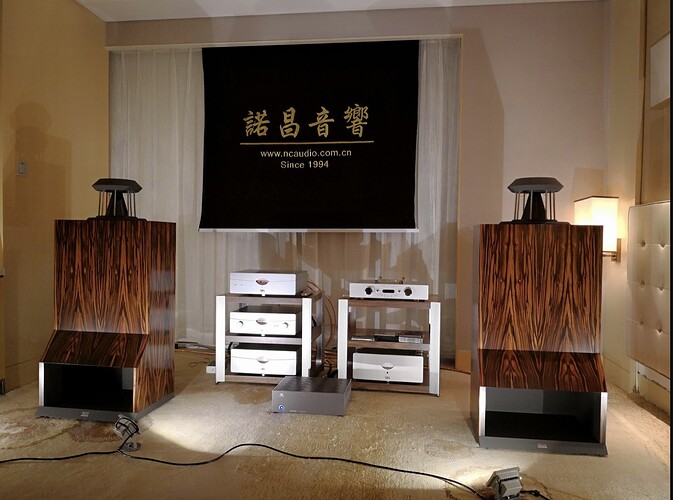 A single full range bending mode driver with the backwave horn loaded for the bass.

So maybe something a bit more conventional but with enough dispersion to meet my sweet spot requirement. Kudos 808s are a popular replacement for NBLs, I’ve heard Kudos 707s in the UK but wasn’t taken with them, maybe 808s would be better but there’s no French distribution so not that easy to check out. I will be in the UK in June for the opera at Longborough so could possibly arrange something then.
Other thoughts of a slightly random nature
Graham LS5/5, can it rock?
Vivid (Giyas would be a stretch though)
Kef Blade (2?), they’d have the dispersion but how do they match with Naim.
What about the beryllium free Yamaha NS5000? (Though I prefer even the looks of the Unicorns to these.)

@Elfer I saw your post on JBL 4367s and you mentioned the LS5/5s, did you ever follow either of them up before opting for Magico?

Probably not Focals unless they’ve radically changed from the other times I’ve heard them.

That’s a nice room and a nice problem to have.

The answer may depend on how much furniture you want and which way around the room will face.

For example, the bigger Tannoys are happy close to a wall, whereas the most suitable Vivid/ B&W/ Spendor are great speakers but will want some space. Most floorstanders will demand some space behind, but keeping away from side-walls (particularly if left and right are different) will matter more.

While panels like classic Quads may be great but also the opposite of what you want, the newer Martin Logans do an amazing job of playing to their strengths without sacrificing too much, so they might be worth hearing too.

Speaker brands that are not omni-directional but do give a wider sweet-spot than most boxes include Shahinian and Neat. I have owned both and they can certainly get feet tapping, heads shaking and/or encourage one to boogie around the room (depending on the music) and don’t require one listener with his/her head in the perfect listening position to work properly. They also deliver on more purist hifi issues like stereo image, bass control and clear and natural female vocals.

Of the two, Neats are happier if close to a wall but Shahinians are more omni-directional.

If I were on your situation, I’d try listening to at least 4 potentially suitable speakers, placed in a position that works for your room, and sitting on the wrong end of the hi-if shop’s sofa. Then just let your ears decide.

I’d at least try the NBLl’s if you still own them. I’ve had them in 3 different houses, in diffrerent room sizes and shapes and each time, I’ve been able to make them work well.

I may well do. I don’t have the boxes though so the risk involved in moving them is increased. They’re also the perfect apartment speaker as they don’t transmit much vibration to the structure and therefore the neighbours. For now I’m quite looking forward to hearing a few alternatives. This will possibly involve trips to Paris, Lyon and Toulouse and may present opportunities for some opera if timed right.

If you go to Toulouse, you could listen to APERTURA. In Montpellier, atelier de l’audiophile, they have the Thiel CS 3.7.
In Paris, a lot of hifi shops , like Presence Audio Conseil ( Magico, Kharma), Elekson ( Wilson audio), Acoustic Gallery ( Tad and YG). Maybe Acoustic Gallery has still Naim , not sure.

There will be a trip to Paris, a dealer there will arrange for me to hear the German Physiks at the importer’s, my wife hasn’t seen the Unicorns yet, I interested in her reaction even if I don’t get on with the speakers.
There are a pair of Duevel Sirius in Séte, though I think they may be too much for my room.
I’ve also come across the Avantages César, another omni, this time from France, and I may be able to hear them near Toulouse.

Interesting if atelier de l’audiophile still has Thiels, they’ve long been out of production. The website always struck me as somewhat historical but perhaps I should pay a visit. I liked my CS1.6s a lot, though they suited the 250-2 more than the 500DR.

I liked the Thiel 1.6 with a Nap 200 at that time. The atelier de l’audiophile site looks prehistorical indeed. Better give them a call or message. I just checked and read that Thiel audio doesn’t exist anymore.
But maybe the shop still has the top Thiel speakers.

Tomorrow, on the way back from San Sebastian I’ll stop off near Toulouse to hear the Avantages Audio César speakers. It’s a little premature TBH as I haven’t even set my turntable up in the new place yet and the rest of my system has barely warmed up after being installed less than a week ago but as we’re passing I thought it would make an interesting break on the journey. 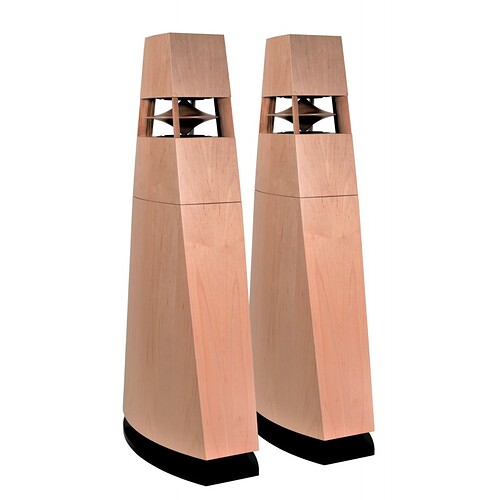 6 moons seem to like them, I wonder if I’ll agree.

Somehow I almost hear an echo of Charlie Drake looking at the pictures.
“‘’allo my Daleks”.

Hi Yeti, they are very nice indeed. My intuition however tells me that Naim is not the ideal partner for them, neither the Duevel. Class A like Pass Labs or tubes are more commonly associated.
But I may be wrong. Sorry if what I wrote is uncorrect.

Why not ask directly Srajan Eben from 6 moons? He has also reviewed some Duevel. 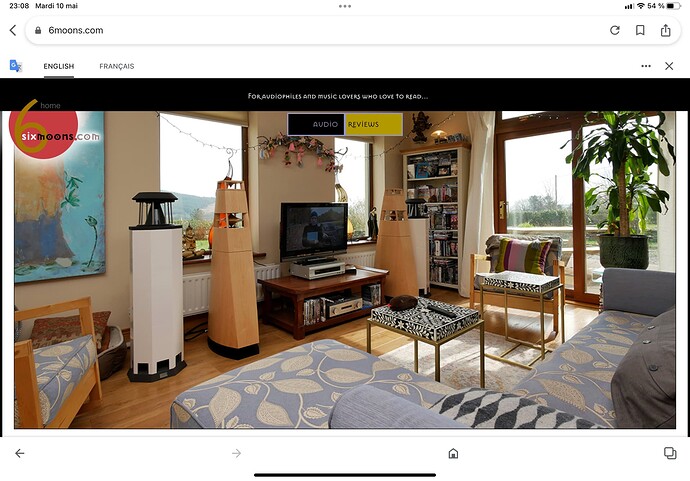 Well I heard them with Kora amps, a hybrid valve design, which in itself is quite nice but it’s not Naim by any stretch. Speaking to Emmanuel Levy, who runs HiFi.fr and sells both brands he couldn’t advise on the electronic match but did think my room was OK for them. Unusually for France he is prepared to offer a week’s home demo so I can put them to the test. It will have to wait until after my next trip to the UK for Longborough Festival Opera. I want to hear the German Physiks too if I can arrange it.

One CD I played on them was Eric Clapton unplugged, which I’m listening to now on qobuz through my allaes. Somewhere between those two presentations could be very good indeed, or potentially rather disappointing but I suspect the former. The real test will be when I compare them to NBLs, which I’ve decided have to make the trip from Montpellier even without boxes.

Alleas out NBLs in and after a bit of moving about they come alive with the front of the speakers around the same place as where the allaes did, only much more alive than the allaes. Even more surprising given their preference for hard against the wall in the last two rooms but here that placement sound flat with no bass, 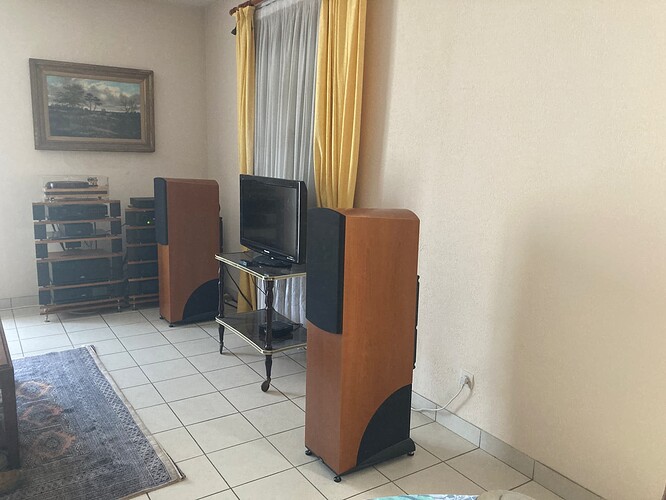 My wife thinks I can forgo trialing the Céssr, I think they’ll have to be really special to earn a place but it will be fun trying them. For now a reacquaintance with the NBLs is proving very entertaining.
The rest of the room is still a work in progress but it will fit around the system as much as I can get sway with, a couple of Stressless chairs are due in August and I think I’m going to need aircon.