Decided to upgrade to the latest Sky Glass TV package.

Now trying to figure out how everything works!!!

Anyone else up and running?

Not heard of it before.

So presumably a Sky branded TV with no need for a STB. It has 3 HDMI inputs so presumably you don’t have to maintain a SKY subscription package to use it as a TV.

Not really sure what advantage there is to this TV over a Smart TV or STB with Sky Now app but probably missing something. Maybe more bundled channels rather than separate Movie/TV/Sports?

Do they still charge extra for viewing content in HD?

Any idea who makes the panel for Sky? 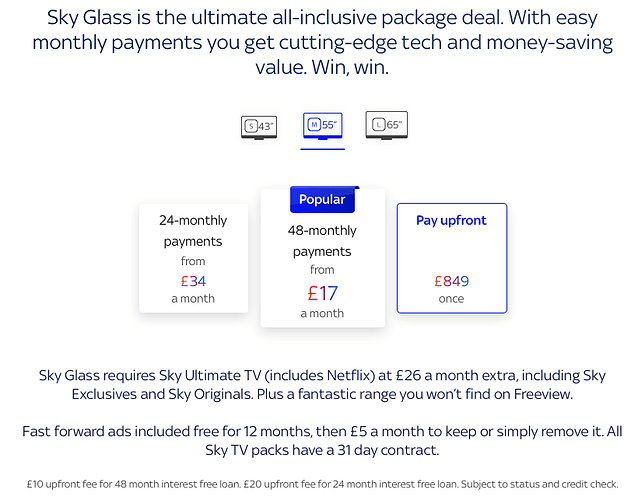 The TV is made by TP Vision.

Teething troubles for some apparently…

Seems neat. However I often have concerns about ‘all in one’s, e.g. PC’s, TV’s, Hi-Fi. One bit goes wrong and the whole thing is knackered…

However I often have concerns about ‘all in one’s, e.g. PC’s, TV’s, Hi-Fi. One bit goes wrong and the whole thing is knackered…

Surely just a Smart TV of sorts with 3HDMI inputs?

Could be appealing to many I think so long as you don’t need a sub to use it for any longer than you want.

If the Ultimate package also included a Netflix subscription (rather than just an app) it’s better vfm.

There are so many streaming packages with only limited content overlap increasingly we’ll have to decide what to keep or only use intermittently.

I ditched satellite Sky 10 years ago if not longer and have never really missed it. I’ve dipped in and out using their Sky Now and similar apps to watch the odd series (Game of Thrones) or sporting events (Lions,boxing).

The TV is made by TP Vision.

Is there a Philips link there?

Is it not simply TV delivery via Broadband internet, rather than by satellite?

I like the concept but a lot of people were expected Sky Q IP since it has been introduced in Europe. No dish, just ethernet connection. Yes good quality TV but most people will already have a nice TV. The other thing I object to is you must have Sky Ultimate package which I think includes Netflix. I have Now TV sports, so personally I would buy a Sky basic package with Ultra HD for the sport and not interested in much else. Also £5 per month to avoid adverts seems a little cheeky

TP Vision we’re indeed part of Phillips but we’re sold in 2014 and are now Asian owned.

The picture quality is excellent….

The system seems to have a few issues…

ie turning tv in on takes a few attempts…

So far the jury is still out…?

Surprised it’s not been mentioned, but Sky Glass includes the beginnings of BBC One HD in the English regions. Wales, Scotland and N Ireland already have their own local BBC One HD service. Only a few of the 22 (iirc) English regions are currently available in HD on Sky Glass, and the number will grow over the next year as regional studios are upgraded to HD and the playout and network switching is implemented across the usual services of Freeview, Virgin and Sky at Red Bee.

Yes. An end is in sight to switching to 101 at 6:30pm. Unless you prefer the region where you originally come from. I recommend Sky ch 960. 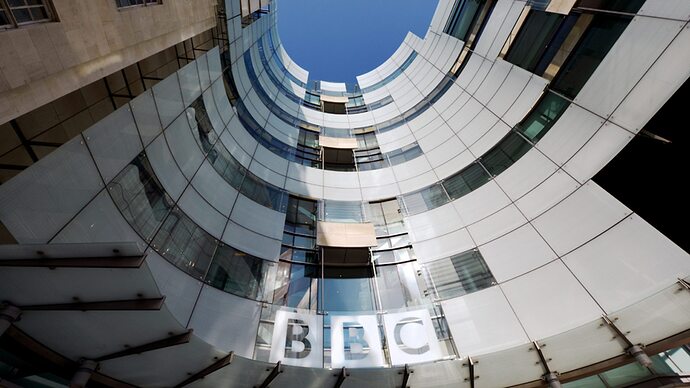 Rolling out BBC One in high definition across England

An update on plans to launch BBC One HD (High Definition) services across all of England from Kieran Clifton, Director, BBC Distribution & Business Development

Streaming instead perhaps via your internet connection?

The only issue I have at the moment is the pucks used with the 2nd and 3rd TV’s is the difficulty turning on and off….

Sky have been planning an internet based system for some time.

Good luck to them. I’ve had no interest since day 1. But I guess it means more load on the internet, which might not be good in places with limited bandwidth.