Just roughly, how long does it take to bed in speakers?

Soz if this has been covered before

Get a piece of string, double it and then throw it away and listen to your speakers for between 40 and 200 hours depending which ‘Sage’ you allign with. But try the string first.

Soz for the silly question

With my Neat speakers they recommend 200hrs

Soz for the silly question

It’s not a silly question as such, just that run-in has proved to be a rather controversial topic around here, as many long, rambling and inconclusive threads attest (hence the popcorn reply)!

Soz I should have searched

It’s not a silly question as such, just that run-in has proved to be a rather controversial topic around here, as many long, rambling and inconclusive threads attest (hence the popcorn reply)!

More with cables and similar, though. I think most people accept it for mechanical components

I don’t think there’s much, if any, disagreement regarding new speakers ‘running in’, unlike cables where there is a lot of scepticism as there as no plausible reason for change has been described and claims to have heard arising almost universally from people comparing the sound with a memory some time previously, and no direct comparative tests done let alone blind. Being mechanical, the compliance of the material used for cone surrounds in particular is something that can change with flexing, settling in over a period of time.

How long it takes will depend on the specific drivers, and how much “exercise” they are given: playing loud will accomplish it quicker than playing soft, and with a good range of frequencies (e.g. music!).

I didn’t realise people put their speakers to bed when they are new.
What bedtime do people suggest is best for younger speakers?

Some come even with blankets.

Ask your neighbours otherwise just keep them intertained the speakers that is.
Claus

No, it means planting in the flower bed…!

If you want to hasten the running in process while not listening to music, you can try putting the speakers facing each other as close as possible without risk of cones touching, and play as loud as it will go without distorting. I think you’ll need to reverse the connections on one so they are out of phase, one cone going in at the same time as the facing one going out, effectively absorbing much of the energy, and minimising sound level in the room. Likely works best with speakers having all drivers in the middle of the front baffle or L & R made as mirror images, and any port on the front or possibly bottom, however even if not it should significantly reduce the room sound level. Mono music would be ideal. This of course lends itself best to a streaming source, whereby many hours of music can be queued. And do make sure the amp has plenty of ventilation.

Sarcasm and criticism sure runs deep in this forum. Thought this was a place for help. 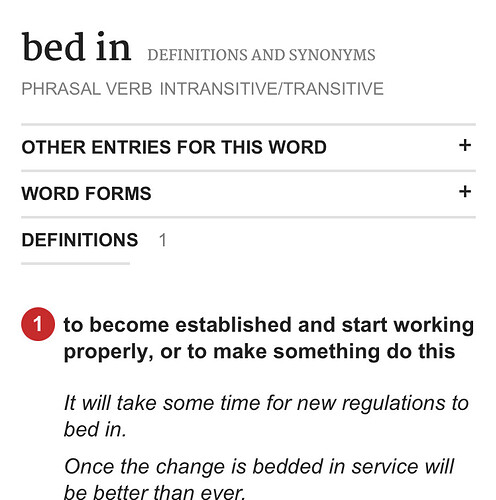 Having built 2 pairs of big speakers in the last year I can safely say that the often stated 200-300 hours is about right. There is a big change from 0-50 or so. This is when the sound stage opens up. From there it seems to smooth out and any harshness and edginess settles. My speakers have been all brand new components so obviously haven’t had a manufacturer run in time like most commercial speakers will have had. I’d imagine they take care of the first 50 hours so people don’t send the speakers straight back!

The tweeter seems to take the longest! But maybe that’s because it’s the most noticeable.

Just play the speakers as normal. It’s interesting to listen to them change.

Honestly, I’ve never heard the term before. Not in any context, although admittedly I’m not a gardener.

On the other hand, I’ve been reading audio magazines and participating in forums for 40 years.

I’m not sure the term makes it across the Atlantic.

I’ve only bought one pair brand new, and I can’t say I noticed any change at all. I’m not saying they didn’t change, but any change was not enough to be evident one session compared with the previous, and they simply sounded fantastic from the start, and continued to sound fantastic days, weeks, months and years later. (I probably got in 20-30 hours a week, sometimes more, and mostly playing loud.)

Secondhand of course means any running in is done for you!

Edit: I forgot! Before the IMFs my first speakers, were DIY so of course were new - I didn’t notice any change with them, though while better than ready made speakers costing the same they weren’t really all that good, even if they impressed my friends. And the mid and treble units I’m using now had been used for no more than perhaps ten hours of testing as part of developing a homebrew speaker design, before their repurposing to their current use: Again any changes have been small enough not to notice, a wonderful sound on day 1, and wonderful now. I did tune the active crossover Using REW when I set them up, so potentially I could test now and see if there is a difference, however I’d have to get the room contents and their positioning the same to be sure that any difference is not due to the room, so I’m not inclined to bother, but I happily accept that change may happen.

Those were the IBL’s surely?