Just plugged in my first Naim product, a mu-so 2.

Initially i looked at 400 euro speakers at ordinary electric stores, but read great reviews about this one. So i shelled out for one after thinking a couple of weeks.

I’ve literally just run it for 15 minutes or so, i find it out-of the box really ”mushy”
Lots and lots of base and little middlerange/discant.
Turned off loudness and set it to near wall.

Still think its unbalanced sound with to much bass and little midrange/discant.

Welcome to the forum ploppen. Yes, when new it will need some running in - it makes a remarkable difference even after just a few days running in, and will improve even more over the following weeks.

Welcome to the Forums!

In addition to Richard’s sage advice, I would try the various settings available in the Naim App - these allow you to tweak sound according to where the speaker sits in room. Turn loudness off.

I wouldn’t have thought a new Muso would ever sound “mushy”.
Certainly my experience of the Muso-QB was that it was incredible straight out of the box.
I wonder what is the source for your music?
If you’re using low resolution files, such as iTunes or compressed Mp3’s and suchlike, it might be you’re simply not hearing the Muso at its best.
How does it sound using Qobuz or Tidal (hi-res) streaming services for example?
Do you have rips of any CD’s stored at full, uncompressed quality, on an external drive that you can try?

Tvanks two you both, as a it-nerd ive already clicked around everywhere in the app setting.

Using the near eall setting and turned off loudness.

Hoping that middlerange will imorove with time then.

Thanks again for your fast responses.

Mushy is probably wrong word, that might just be due to my bad english.

Still it’s a new speaker to me, only (looking at the watch) four hours of music run through it.

I’m playing ordinarie pop-music, will be using 90% apple music. Through airplay and hdmi via Apple Tv.

I still think its so base-heavy compared to the rest of the soundspectrum.
was surpriced that it could reproduce such low freq base.
To me, the base takes over from midrange so i dont really get this ”detailed” sound, more vocals and base, base and some base.

I’ve only found ”loudness”, ”near wall” and ”near corner” settings that could effect and that helped a bit but not that much.

So thats why i wondered if ”playing in” the speakers would help anything on how i persive it to sound to much undestinct base and maybe that midrange/discant will ”grow”.

Its hard for me whos not really used to this to describe sound, probably using the wrong terms and so on.

Since i upped my budget from 400 to getting this as a streamer speaker i wanted to be so overwhelmed, which i guess im really not yet.

Only time will tell

What have you got the Mu-so standing on, and at what height?

Also - would you consider signing up to a free TIDAL or Qobuz trial, so you can hear what they sound like via the Naim App, in comparison to Apple Music via AirPlay (which by its very nature will be compressed).

At the time of unpacking i’ve got it on a solid sideboard.
Will be moving the the white tv-furniture on the right after i wallmount the tv.

Can try some higher quality source when i get the chance but really not sure on how this will remove base. 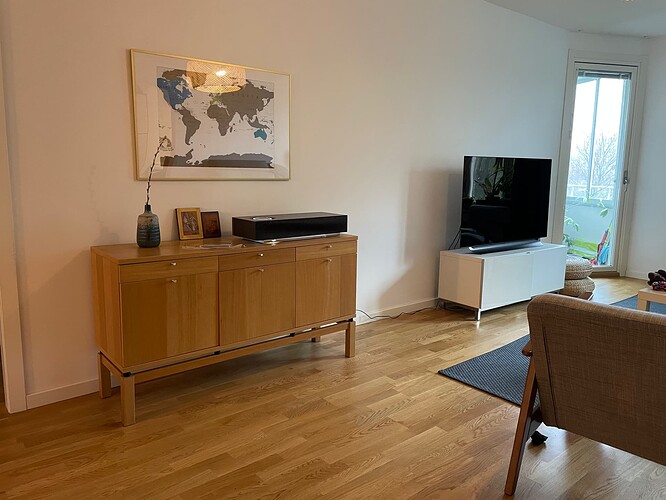 I’m going to answer myself here.

My old airplay speakers from the swedish brand Nocs that i found two weeks ago, was what started my search for new speakers.

Found them, hooked them up and played something and thought
”Man, these speakers sound great, but i need another set that my girlfrien can use from her platform.”

Ordered the mu-so, hooked them up and was kind of disapointed.

So, now placed the two systems next ro each other.
The new mu-so and the good sounding old ones.

And i have to admit, when hearing them next to each other the muso plays is in a different league.

I guess i’m just use to hearing less base, so the treble and midrange get more room in the music so to speak. Dont know how else to describe it.

So thers is probably nothing wrong with my speaker, maybe my head just needs to get used to this ”sound”.
Also looking forward to hear if anything changes in regars of mids/treble when they are ”played in”

Tnx to everyone who has taken the time to read and answer.

There’s a very good chance the nature of the wall is at play here. I’ve compared the Muso up against a hollow drywall wall , framed in 2x4 lumber or metal studs & the sound was much as you’ve described… bass-heavy , booming no matter what.

Up against a solid concrete wall it’s much better; no boom or rattle.

You are not the first person to post here about the Muso putting out too much bass. Thus has been mentioned here on the forum quite a lot, and will be affected to some extent by your room acoustics. Like any speaker, it could be that it’s just not a great match for you.
I wonder if a QB would be a better option.

I’ll add that if you’re streaming lossless files you’ve compiled from CD via Airplay 2 then there’s nothing wrong with the source UNLESS you haven’t defeated the EQ in your music settings. Set that to either off or flat for starters; you can always try other EQ settings to suit your tastes.

Hey, that was actually a great suggestion.
Moved the speakers to front edge of the sideboard and the change in sound was instant.
The sound became lighter more airy, dont know how else to describe it.

Dont know if it was the concrete wall behind or the part of sideboard infront that made the differance between those two placements.

It sounds alot better at the current place, thank you sir.

Glad you got it sorted.

Yes, but it feels kind of a fix for some other problem.
Moving it ro the front and setting room compensation to ”near corner” makes the base less dominant.

Also having it positioned at the front makes it look pretty strange, decorvise that is.

The real test is when i wallmount the tv and put the mu-su under the tv.
We will see what happens then

When I was auditioning the Muso 2 at the dealer, it was fresh out of the box and I felt that the bass was a little too dominant and muddy/woolen. The dealer then suggested that we can try it with IsoAcoustics Orea pucks underneath (I don’t remember which versions they were) and to my ears it sounded much better, more controlled, and the mids and highs were able to come through more. It is not the best solution aesthetically but when I eventually buy my Muso 2 I will buy the pucks with it.

I have the first generation Mu-so and also use the Oreas. I found that made quite an improvement to the sound.

Glad to hear that! I just noticed that they now have a “zaZen” platforms that have isolation pucks integrated. That might be a much better visual match, although I have not looked into the compatibility of the dimensions.

This reminds me, that the stand for a speaker has sometimes big impact; like small speakers without bass suddenly gain much, when based on a hollow, wooden box. (Which resonates along with the speaker.)
This might explain the experience with the isolation pucks?