I am a relative newbie to this awesome set up.
After a recent house move all was fine but then a week ago suddenly I couldn’t get anything out of the LP12 - I play a record and can hear the music lightly coming from the stylus. But nothing is coming through to the Superline and then the speakers. The Superline is set up as before, light on, and was working in the present set up. There is no hum when selecting the LP12. Might this be a stylus problem or a Superline problem?
The CD plays fine.

As I am in Madrid, there is no shop I can go to for advice.
Any thoughts would be very welcome.
Thank you.

Have you changed anything since it last worked? The superline is getting power and you don’t mention a separate supply so presumably it’s coming from the powered input socket on the 552 next to the RCA inputs, could you have deselected this input? Inputs are assigned with the prog function of the remote, the manual tells how.
A novice getting a 500 series system is fraught with pitfalls, the need for the 552, superline and 555 to have transit screws fitted to move them and not to be tilted significantly without them in place, including when they’re fitted and removed is the first one to spring to mind.

Hello Yeti
Brilliant - thanks. I do think you have something with the remote deprogramming - I was mucking around with it, trying to programme the cd player to no avail so must have done something then!
It’s the Narcom 4 remote. I also have the heavy Naim remote which I was also trying out.
I see manuals that includes the Narcom 4 but unsure on the programming function - it says hold & then use the numbers but it doesn’t seem to be doing much…

“4.2 Input Socket Assignment
Any NAC 552 source input socket can be selected by any button. For example, while the NAC 552 default setup is for the cd input button to select input socket No. 2, custom programming of input assignment could enable any input socket to be selected by pressing the cd button. Assigning of each record button follows the corresponding source button.
Input assignment setup is accessed through the NAC 552 program mode. To switch into (or exit from) program mode press and hold the prog key on the NARCOM 4 remote handset (in preamplifier mode). Program mode is indicated by a flashing indicator on the front panel volume control and the record selection indicators extinguishing.
Note: If no function is operated within five minutes of entering program mode the NAC 552 will return to normal mode automatically.
Any of the six source buttons on the front panel can be assigned to any of the nine stereo inputs (seven DIN sockets and two RCA Phono socket pairs) on the rear panel. In program mode, as a source input is selected, a rear panel indicator will illuminate to designate the socket to which it is assigned.
To change the input socket assigned to a source button, select the source button and use the front panel record mute and mono buttons to scroll along the input sockets. If the input socket selected is already assigned to a source button the indicator above the socket will flash repeatedly. It is possible
to assign one input socket to more than one source button but NOT to assign multiple input sockets to one source button. The remote handset record mute and mono functions can also be used to set up input assignment.
To exit from program mode press and hold the prog key on the handset until the record select indicators are restored and the volume indicator stops flashing.”

So with the narcom 4 press and release pre then press and hold prog until the LED in the volume knob starts flashing. You now need to find the mute and mono buttons on the bottom row of the preamp, select one of the inputs on the top row, Press it and look at the back of the preamp, one of the inputs should have a flashing LED above it, pressing the second row mute or mono buttons will change which input this is moving the flashing LED left or right along the inputs. Once you have the input you want for the top row button you can select another button and assign an input to that, when you’ve finished press and hold prog on the remote again until the volume knob LED stops flashing

As Yeti explains above, it sounds like you may have inadvertantly changed the input socket assignment on the NAC552. Change it back (assuming you are using the powered AUX2 input for the Superline) and all should be well.

A lovely system to have inherited, by the way…

Thanks both - the ‘translate’ instructions help a lot.
I seem to have reprogrammed aux1 to the phon input & there is life in the speakers when I turn up the volume & occasionally a crackle when I move the LP12 earth on the back of the SuperLine. But I’m still not getting any sound from the LP12.
I have checked all connections & all are fitting well.

Yes, an incredible system - my brother was a huge fan of Naim & Linn - sorted by the excellent Cymbiosis in the East Midlands. A considerable vinyl collection also came with the system.

Have you still got a stylus on the cartridge?
What is the arm?

The powered socket for the Superline should be AUX2 (Input 7)… 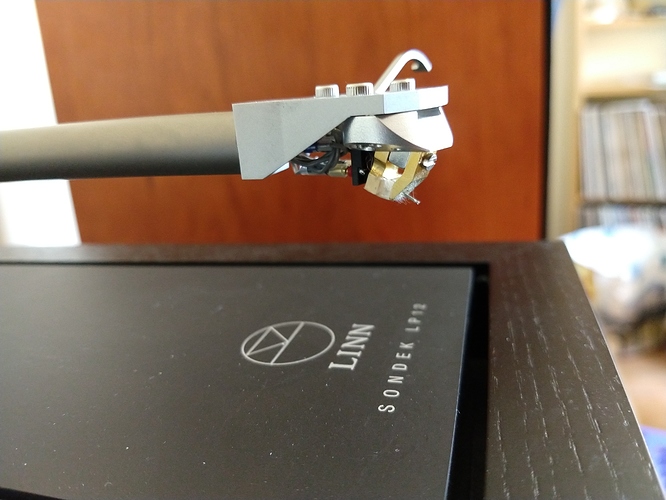 I now have the same connection, I believe, on aux 1 & aux 2.
Turning up the volume there is life.

Does life = music or is it just noise again?

Can you confirm that you’re not using a dedicated power supply for the superline and that it’s connected by a black Snaic with a 5 pin 270 degree DIN plug on each end to AUX 2 socket next to the two RCA inputs on the left of the pre amp as considered from the front? The other end goes to the DIN socket on the left of the superline (considered from the front) below the link plug fitted to the Burndy socked (you must have the link plug if there’s no Burndy cable and if there is a Burndy cable you have a supercap powering your superline and shouldn’t have a Sniac in this socket). You might need to find a dealer or get your head around reading manuals if you can’t make sense of this.
I’ve never owned a Linn turntable so don’t know for certain if there’s another tone arm cable connection anywhere near the arm, there would be if you had an Aro but that looks like a Linn arm. I can’t tell an ittok from an ekos or an ekos se, they’re probably all the same in this detail but someone else will have to confirm. I can’t see anything wrong with what I can see in your photos. Somewhere there’s a wrong or missing connection between the pre and the cartridge.
I’ve just got back from the pub so I apologise if I’m being a bit abrupt. 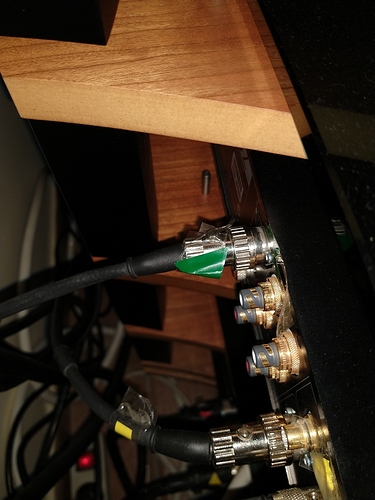 Ignore the coloured stickers - my system to move them to the present site - which worked but now this!

Yes, some connection - could be a problem with the LP12 or something within the Superline.
As mentioned the CD player is working fine so one of those two elements.

Really appreciate the time, thanks.

All looks to be in order there, you say you can hear the needle talk when playing a record and nothing through the amps and if you get the indicator light as above that connection as described earlier for one of the pre inputs it should work if there’s no fault. It’s on both channels too so not a loose cartridge tag. It might be time to contact the man at Cymbiosis as it’s one of his systems, he’s known to travel. One last thing is maybe try a power cycle of everything turning the power amp off first and on last, the superline takes several minutes before it will pass sound from switch on, far longer than the preamp needs so be patient.

Yes, good point about the Superline. It mutes for quite a while after switch on to allow the circuits to fully stabilise.

When you press the AUX2 button on the front does the LED indicator light up on the back to the corresponding Socket 7?

Thanks guys.
Richard - I have a light behind Aux2 - not flashing but constant - how would I know it is Socket 7?

When I turn up Aux2 I can faintly hear the CD playing.
I seem to have programmed Aux1 to the CD, as well as the CD button(!)