After I retired 3 years ago, I treated myself to a new NAIM System, comprising a 282/250/HCDR and NDX2/555PSDR. The NDX2 was upgraded to an ND555 shortly afterwards when a good offer from my dealer arose.

Initially, I was happy with the system, but after a while it became a little tiring. Specifically, I found that the top end was shrill, harsh and fatiguing at high volumes and in extended listening sessions. I experimented with cables etc. to no avail. I then decided to try some alternative equipment.

I tried the NAIM 252/300/SC and even a 552/300. Whilst an improvement, I was not blown away. Then, on my dealers advice, I tried a high end Linn system; a Klimax Organik DAC and Klimax Solo monoblocks. Whilst I liked this more, it was at the other end of the scale in terms of smoothness, and was just too laid back for my tastes.

I then consulted another dealer and tried some Integrated Amps from Ayre, Vitus and D’Agostino. The D’agostino Progression Integrated just totally blew me away from the first time I heard it. The dealer then suggested that I try dCS streamers which “work very well with D’Agostino!”. He gave me an extended loan of a Rossini player, which I ran side by side with my 555/555PS through a loaned D’Agostino amp. It became very clear very quickly that the Rossini was streets ahead of my NAIM streamer in terms of resolution and warmth. It was significantly better.

So, orders were placed and my system now comprises the following:- 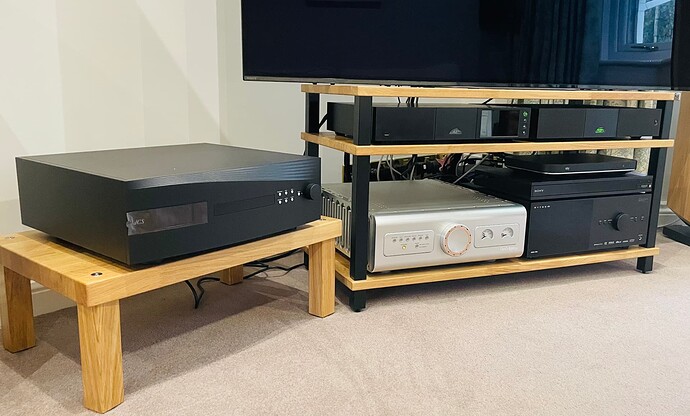 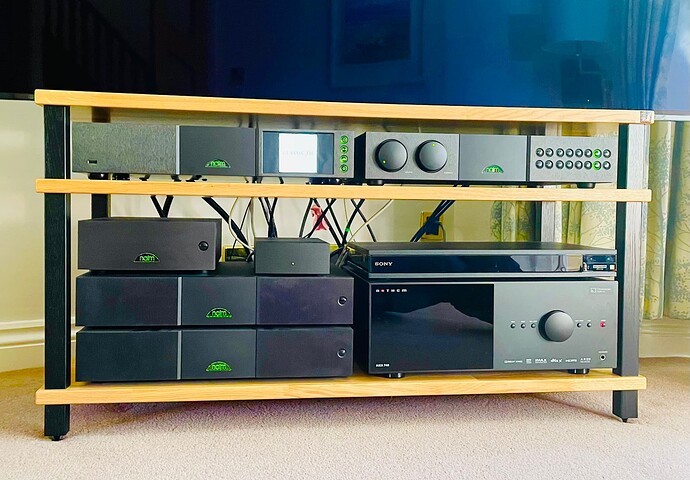 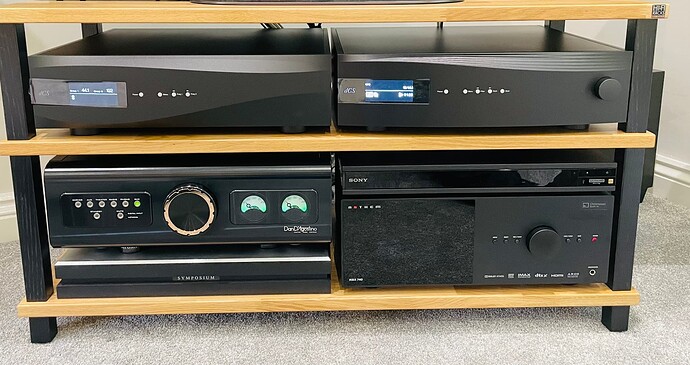 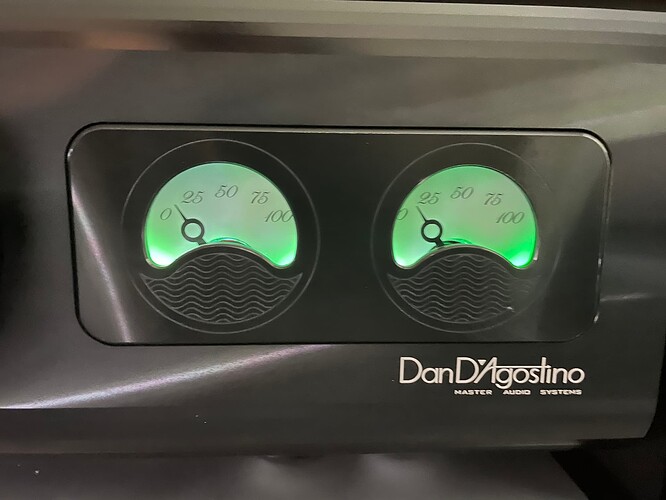 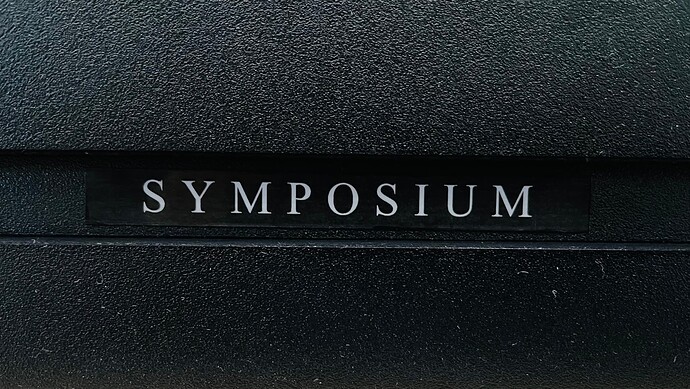 I have posted some “before, during and after photos”. This has been a long journey, and at times has been emotionally and financially challenging. However, I knew it had to be done and I cannot believe how lucky I am to have the system I have ended up with. It is simply astonishing.

I have bought NAIM kit on and off since the 1980’s. I still have a few MUSO’s at home and will always have a soft spot for the brand. Good luck to all of you out there in your hifi/musical journeys.

Well as always there other options, Naim can be a bit of a religion, the important thing is just to enjoy your music. That’s a fine system you’ve put together.

Thanks Lindsay. You are absolutely spot-on about the music. Without that there would be no hi-fi. It’s all about listening pleasure, whatever the system.

A respectful question (I hope) but when you bought the new Naim set-up (as pictured?), did the dealer concerned come round and set it up for you?

The reason I ask is that any competent and knowledgeable Naim dealer would avoid stacking boxes as per the picture. I know Fraim & racks are spoken on here ad nauseam but Naim kit, especially it seems, is sensitive to these things. I would not be surprised if this contributed to the issues you had. I’ve heard some Kudos speakers and in the wrong room/set-up they can tend to harshness IME.

I’ve heard that an ND555 can be surpassed in quality terms from dealers but AFAIK it’s generally at a cost(?)

Yes, the NAIM dealer did set it up. I’m very happy with the rack and did not want a FRAIM, due to size/looks/lack of performance uplift per £.

The dCS source is, admittedly, much more expensive than my previous ND555/555PS set up, but it is really so much better that it more than justified the financial outlay.

I see you have the new apex dac ?

Just like you i found the rossini so much better for me than a nd555 even with 2 power supplies.
I was also going to try the integrated amp you have, but after all the hassle i had with my demo vitus i had, i decided to keep my 500dr and 552, but get the 552 serviced and DRed as it was poorly lol.
But nice system enjoy and is paul your dealer by any chance

You could then add an extra power supply on the ND555, or the clock to the rossini, the difference in price is £500 more for the clock.

Plus the dcs doesn’t need any switches etc, so you could save a few quid just there and that then probably makes the rossini cheaper, if you are maxing out the ND555

Many options out there. The only certainty is the need for good replay. Enjoy your set.

Shouldn’t there be a bunch of people on here by now yelling, “monkfish”? Am I saying that right?

Such Naim dealer should be banished! I write it more on the funny side, but think it however.

As @HappyListener wrote, the Naim system sounds optimally with power supplies on a different rack, and components not stacked. It makes a big difference.
Then, for the source, the Rossini Apex/ Vivaldi clock is 42 k, so 30% more expensive.
If the comparison is on details and resolution, for sure, the Rossini, even without a clock, is better vs the Nd555. All depends what is the most important for the listener.

But congrats for the new system, it looks fabulous and certainly sounds fantastic too.

Glad you’ve found what you’ve been looking for. Do you think that to some extent you were adjusting the sound of your source and amps to better match the speakers and room?

Great system! But I think you need a better HIFI rack.

So the D’Agostino integrated beats the Naim separates? It would be nice to be able to get away from separates. And D’Agostino is located close to me.

Yes, but only to my ears of course. It really has blown me away, but I’m sure others would prefer the NAIM sound. Horses for courses, as always…

Yes, probably. The listening environment always has a big impact on the sound. In my space, this system really does sound terrific.

Dunc, that’s like saying in your system, you don’t need a 500, a 300 will do. I compared the two clocks at length, the Vivaldi justified the extra cost. I see this as an endgame system, and me (and the wife!) don’t want any more upgrades!!

I tried a vitus 025 mk2, as wanted at the time less boxes if i could, it just so happened that my 552 non dr was just starting to go off and then rapidly went off shortly afterwards, but now its all run in after its service and dr, i am very happy with it and like the combo off dcs front end into naim amp then pmc.

I must admit i have never tried the vivaldi clock on my rossini, nor have i ever heard that combo at the dealer, so interested to try it, but i do find the clock is a very strange upgrade that doesn’t hit you from the start, but at the same time if you forget to switch it on, it leaves you thinking something isn’t right, till you remember to switch it on

Hopefully the next vivaldi will have a streamer built into the dac like the rossini, then i might be tempted to upgrade to a vivaldi dac and clock, but waiting to see what dcs do next with it as it can’t be far away