Hi there star gazers.
All through this year we have had some spectacular planet views;
In early summer a very bright Venus in the western evening sky, then it disappeared for a few weeks & reappeared again in the pre dawn sky in late July & is still there for the early risers.
Mars has been closet & brightest during the summer & is still going strong.
We’ve also had super views of Jupiter & nearby Saturn - Jupiter is the brightest of the two & Saturn has been at the best angle to show off its ring structure for those that have some decent bino’s or 'scope. But they are saving the best for Christmas … on the evening of 21st Dec they are in what is known as ‘great conjunction’ & will appear to be one point of light to the naked eye. They will be low down in the south west at dusk/dark. So if its a clear sky evening, try to make a point of seeing them, its a very rare event. 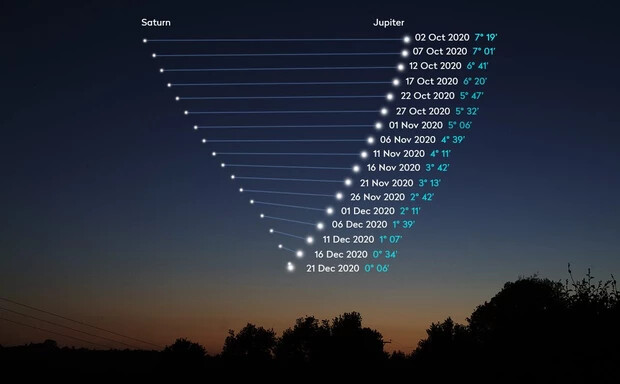 Yes, it’s about once every 400 years that Jupiter and Saturn visually line up this close, about one fifth of the diameter of the moon apart.

It can be seen from across the globe. Jupiter should be bright enough to be seen about 30 minutes after sunset and will drop below the horizon about an hour after that.

I have been tracking their paths recently. I am just hoping for clear skies, maybe a bit of an ask for mid winter in the UK.

I’ve been watching those two all summer. Saturn is winning the race! These are usually associated with bad omens. What will happen this time?

Interesting that it occurs on the 21st Dec along with the winter solstice.

I managed to get to see them on 19th and 20th December. Not quite their closest as 21st was blanket cloud and rain where I am in UK.

I could see them separately with the naked eye and they looked pleasing through my binoculars. Saturn looked like a small rugby ball and I could see two Galilean moons of Jupiter.

I only had time to snap a couple of wide field photos before the clouds rolled in.

We had a decent view on Sunday through a scope. Could see the rings on Saturn. As they are low in the sky you have to look through a lot of atmosphere which isn’t great.

Didn’t see anything.
But, prefer when the days come around more than go around.

As the sky was so clear, I got the birding field scope out tonight, the scope has a 27-80x eye piece.
Both are low down in the sky so not ideal viewing, but a crystal clear dusk/dark sky, the view was great to see.
Saturn with rings & good definition.
Jupiter showing some of its bands & its visible moons wee clear to see.
Did you know Jupiter now has 79 identified moons, 26 as yet to be named

I have been watching them over the last few weeks using the naked eye, I don’t have a telescope but I am tempted having heard your description