Nova pre-amp out RCA or DIN?

I have used my Nova as a source for several years feeding 282/active SBLs, it works very well and gives the NDX 2 a run for its money.

I’ve always connected RCA pre-amp out to the 282 either via RCA to RCA or RCA to DIN inputs on the 282.

The online documentation is not very helpful, but does anyone know if the 5 pin DIN ‘subwoofer’ out is actually wired as a normal R/L stereo output? Just wondering as it might sound better than using RCA to the 282 if I could use DIN to DIN.

Trouble is I can’t really crane my neck easily to see the rear of the Nova.

I had somehow got it into my head that the DIN was for a subwoofer - couldn’t fathom why, but have never had a subwoofer.

The Nova product page has changed and several images including rear input/output connections has gone, or at least I can’t find it.

The interactive module just doesn’t help as it only talks about RCA connections, and the image is too small to read the labels for the connections.

They are not specifically labelled on the current quick start guide:

Found this from an older post and it all becomes clearer that RCA is subwoofer/pre out! 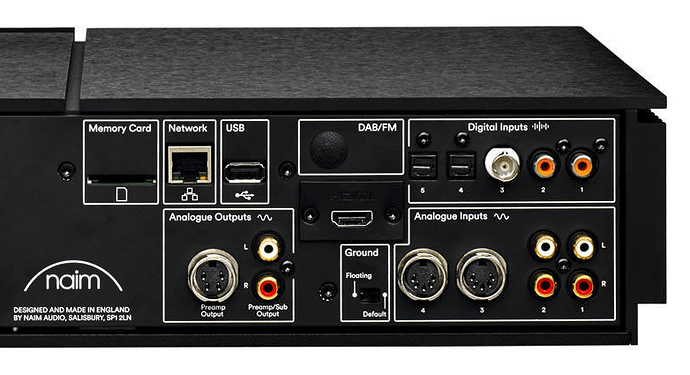 So have I missed using the DIN as pre out all this time?!

The issue with using the output on a Nova is that it’s post volume control, so the signal is ultimately restricted by the Nova’s preamp. With the 282 and active SBLs a dedicated source would make so much more sense.

The issue with using the output on a Nova is that it’s post volume control, so the signal is ultimately restricted by the Nova’s preamp. With the 282 and active SBLs a dedicated source would make so much more sense.

Logically yes, I agree, and that’s the long-term intent. Equally though if Naim thought it was a non-starter sonically they might not have included the option.

The Nova and Atom before it were a stopgap after some work on the house I thought I could redeploy elsewhere when my active system/LP12 were in storage, and I couldn’t find bits and bobs amongst all the boxes I expected them to be in (turntable platter being a key one!).

Although it’s clearly a variable level output it’s still very good and adds a bit of convenience - I’d have to wonder if it’s much worse than NDX 2 variable line out option, or indeed if it actually goes through a formal physical pre-section given that the inputs including analogue ones are all digitised. There must be some form of pre-amp in the Nova to supply its power stages, but could it be possible that the preamp output effectively bypasses that especially if volume is controlled in the digital domain (before feeding internal pre?). Hope that makes sense.

I tried an NDX 2 soon after release and it sounded considerably better than the Nova.

I did the same maybe 18 months later and the gap had narrowed significantly (possibly due to firmware), and I felt that NDX 2 alone would have been a sideways step without adding a PSU. I think it just showed me how good the Nova is so I stuck with it and upgraded the LP12.

Ok, will dabble and let you know…

Changed nothing yet and Nova sounds simply superb as a source.

I am using a Nova DIN output to drive a quad 606 power amplifier into a pair of SL2s. It’s sounds great (and much better than driving the SL2s direct from the Nova).