Obsolescence - Which Way To Go?

I’ve done the same with a Chromecast Audio. But as auto input switching is not possible, native support for it, Tidal Connect or any other connectivity option would still be a great improvement.

But, I think if you’re talking about obsolescence, it having a SPDIF input doesn’t really address that, at least not to the extent wireless connectivity options do.

Re: Ariplay, as I’ve mentioned before, the biggest issue with Airplay is that it’s not available on/for non-Apple devices, that includes client side support.

Thanks for all your inputs and comment. I think there’s a consensus that obsolescence potentially presents a problem because of the pace of “digital” change. Given how much I enjoy my CDS3, and of course Xerxes and Nat 05, I’m going to leave my main system as it is but am going to add a budget DAC to facilitate evaluating new music on Tidal.

In many ways, Vinyl is now less subject to obsolescence, than CD’s are - which were intended to supersede Vinyl…! I can still buy quite a good range of Record Decks, from relatively humble Rega’s say, to full-blown Linn LP12’s. Whereas… Its no longer possible to buy a range of CD Players.

Interesting… Who would have thought it…

And its not only CD that has essentially come and gone. SACD, DAT, DVD. Streaming will be a tough challenge going forward as a replacement. I suspect that it will catch on more in the future as its the younger computer crowd that is used to the internet and will not be attracted to vinyl the way the older generation was.

Using a unit no longer made, my CD555 CD player. remember them ?, supported by two DR power supplies can sound not too bad.
One day the question might be asked if you still stream your music? Life just evolves.

Streaming will be a tough challenge going forward as a replacement. I suspect that it will catch on more in the future as its the younger computer crowd that is used to the internet and will not be attracted to vinyl the way the older generation was.

“The younger crowd” is attracted to vinyl as a fashion thing (or is that is retro-fashion?) - certainly from what I have heard from their talking about it, that is how one of my sons and his friends, likewise a niece’s husband and his friends clearly regard it. Ditto valve amps. Not a single mention of music or sound in any conversation I’ve overheard, but a lot about looks.

As for streaming, if you mean online that is a fundamentally different consideration because it doesn’t involve buying/ownership of the recording, and infers an inherent acceptance of transient availability, at least in relative terms. That of course is the norm for many also of the younger generation, where pop music in particular tends to music of transient interest, coupled with instant availability of the latest releases.

Streaming from your own music store, which is the equivalent to vinyl and CD, surely is heading towards maturity, though it does suffer from more decision factors than the physical medium approach.

When I had my logitech sbt and it lost its support from logitech, I was really pi$$ed off.
I was only using it to play spotify, but without support from logitech it eventually stopped, rendering it semi useless.
I felt vulnerable that big tech companies can stop the music playing in your home, hence why I now only have a pocket change chrome cast audio player and won’t care too much if its rendered useless.

I wouldn’t say that, have a pootle over to the Juno web site and see all the LPs that are being made and bought for the under thirties.

Not sure they are being played on sophisticated LP12s, Rega10s etc but certainly LPs are being made and bought for the under thirties , probably played on Pro_jects with built in phono stages .

It’s how you look at it. It’s not just useless as it doesn’t have the latest connectivity anymore. I also have the first Muso and still use it with pleasure to listen to my music library. And if needed I could listen to streaming by just connecting my phone instead have it connect in device. Do I like the fact that it is not the same like with my ND555, certainly not but I can live with it…, not the end of the world.

And we also shouldn’t forget that it also happens in our mind. Just in the process of replacing my Canon 5D Mark 2 with a Canon R5…, the Mark 2 still can make great pictures, but I would love to embark on the enhanced capability of the R5…

…obsolescence potentially presents a problem because of the pace of “digital” change. Given how much I enjoy my CDS3…

Personally I think people tend to get a bit too hung up on this digital obsolescence thing. There really isn’t that much difference between the way bits are fed to a DAC from a CD player, or a streamer playing from local or cloud storage.
From a broader perspective, the people who suffer from obsolescence are the people who have to have the latest thing, and have to have it now! You can say that about a record player with a diamond stylus being better than one that uses a sharpened steel needle, just as much as you can say it about a streamer that supports Chromecast or Qobuz natively. The only thing that really becomes obsolete is the ability to access the latest flavour-of-the-month method of delivery.

@ChrisSU yeah fair point but hypothetically if Naim ceased doing firmware upgrades on my QB which meant it wouldn’t work with the latest version of Tidal what then?

If you have a Roon server and apple Airplay, then simply carry on with your existing QB. That’s our plan.

Here is a 2018 article on the complementary nature of vinyl and streaming. There are many facets to this story. I suspect that the 75% share than streaming had has only increased in the last 2 years, even the last year. https://www.engadget.com/2018-12-04-music-streaming-is-fueling-vinyls-resurgence.html. Lets revisit this in 10 years and see what the numbers are. There will probably always be vinyl and streaming. Its just the ratio. Interesting that an artist can make so much more money with a vinyl release, particularly if its a low volume item.

Well I suppose that could happen one day, but it seems pretty unlikely as long as both Naim and Tidal stay in business. Even then, as Bluesfan says, there’s always Airplay.
Historically most formats seem to be quite long lived. As a vinyl user, you have to accept that - although I guess you might be a bit miffed had you been committed to cassette tape!

If your musical tastes are largely in the past and you have the software (vinyl or CD) it can change the equation somewhat. Having top quality sources already I have no interest in streaming. My sources might be considered obsolete by some but top notch by me.

This is the problem with relying on a subscription service remaining viable and/or available. The modern world has realised that an ongoing revenue stream that you are tied into is a good earner…

t and you have the software (vinyl or CD)

Or “electronic” files stored on a medium of your choice (hdd, ssd, memory stick etc)… In my view these last have at least the potential for the best sound quality of the lot, but very much depending on the mastering.

Or “electronic” files stored on a medium of your choice (hdd, ssd, memory stick etc)… In my view these last have at least the potential for the best sound quality of the lot, but very much depending on the mastering.

But these stored files could become obsolete and not work as they should.

My old SBT plays every Joni Mitchel album I have stored on a NAS AND DISPLAYS THE ALBUM COVERS. 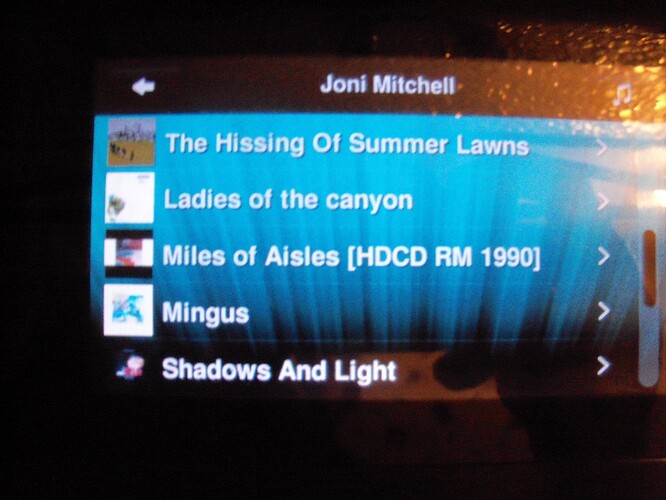 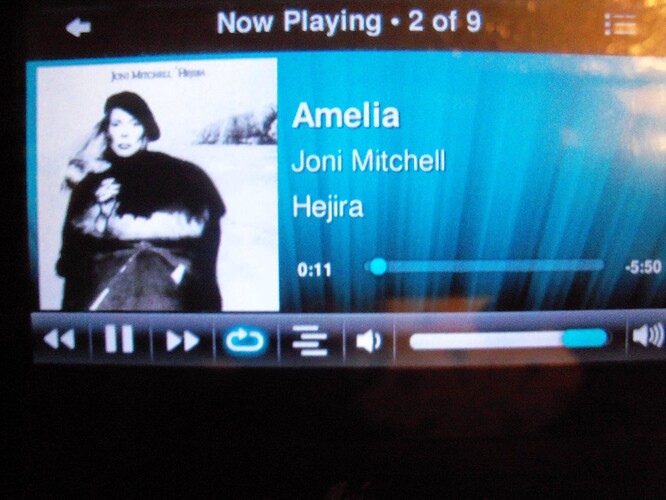 My QbMk1 is only able to play the music, but doesn’t display the covers. (The covers that are shown where ripped a couple of days ago with the JPEGs embedded)??? 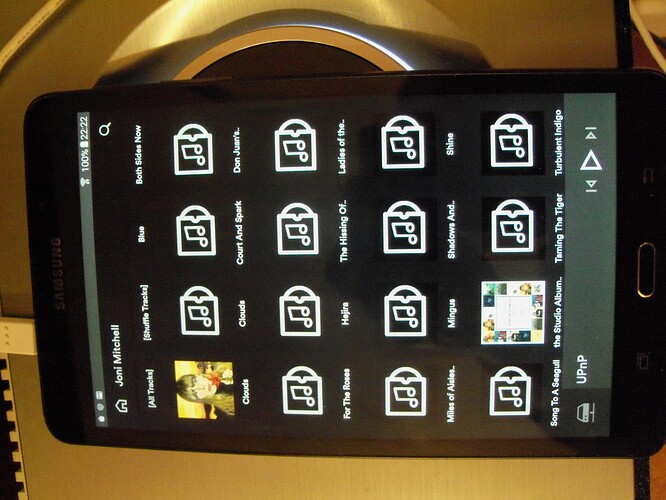 I have about 700 albums that don’t have the JPEGs embedded.

My original comment was thinking only of the files as music recordings, not other information that might be stored with the music. Changes to software may cause changes to usability of the files such as inability to access stored images (not music), but that is not the files changing, rather it likely is a lack of recognition of value of the former capability by the software developer: and of course with playing from one’s own store there is no necessity to change software that is working just because the manufacturer happens to offer another version. But yes, if you change the streaming device for any reason the software will be different and so features beyond playing of music may be different, just as the change may make the sound quality different. Sadly not all software writers recognise the value of different features to different listeners: in my case the bugbear is the lack of support for browsing/searching by file storage naming and structure by my player of choice (chosen for other reasons).

The files themselves don’t cease to function as they should as music recordings unless the file itself is damaged or becomes unavailable due to store damage. But then good housekeeping ensures you have one or more backups - backups are so easy and ought to be automatic, done because there is a recognised risk of loss - true greater than CD or LP, but then backup of LP or CD is not possible (other than ripping to file!).

And the music files themselves don’t become obsolete, or rather won’t unless or until there is a future change to file format not supporting, say, .flac or .wav - but then I’m sure there will be a conversion tool so the music itself won’t be at risk of loss, and likely only minor effort to change if, as is likely, such a tool allows bulk conversion.

By coincidence yesterday morning Ian Skully on R3 played a beautiful piece by Vivaldi, Concerto for 2 cellos. I immediately sought a CD but none on Amazon but was available for download or streaming including on Tidal and Qubuz the latter having high res downloads. As it happens I found a new sealed CD in the flea pit so I’ve ordered.

However, if this is a sign of the times perhaps I will have to rethink - at some point.

And in the event of CD being cheaper (sometimes the case), then with streaming you can still purchase the CD and rip it to your store upon receipt.

Of course the reverse also applies: if download is cheaper, people wedded to CD and without streaming capability can always buy that and make a CD out of it, subject to fitting to the CD capacity and downsampling if hi res. The ‘electronic’ file can then be kept as a backup in the event of damage or deterioration of the CD, or when one day decide to bit the bullet and adopt streaming.