My son asked tonight what the answer to this question is:

For a) he initially thought x=3 and y=2 until I said provided they both have to be positive (or negative) whole numbers/integers and that the answer can’t be zero for both. That detail was apparently not provided but I’ve not seen the original question myself.

For b) he wasn’t sure but like me had considered infinity (or -infinity) for both.

Is there a more obvious answer we’re missing.

I once messed up a computing exam spending almost 3 of the allotted 3 hours explaining/ranting how question 1 of 4 was completely stupid as there were so many undefined parameters it made it impossible to answer correctly.

This seems to be similar.

I agree, it’s too vague. For b) you can use any same number of zeroes after 3 and 2, so there is no highest number if infinity is excluded.

I find lots of modern maths education odd in the sense that you can apparently give the correct answer, but lose marks if you can’t demonstrate how ‘you got there’. Fair enough if you show your logic/method and got the answer wrong that you get some points but when a kid can just give the correct answer why do they have to show how?

It would help to know the educational level. Have they been introduced to negative numbers?

I guess the question wants you to demonstrate that you understand that concept.

If we are dealing with just positive numbers then a) 0 is the lowest value. b) there is no maximum (infinity isn’t really a number. More a concept)

If you can include negative numbers then there is no minimum either.

It may help to plot a graph to answer it. (the ‘answer’ is the red line) 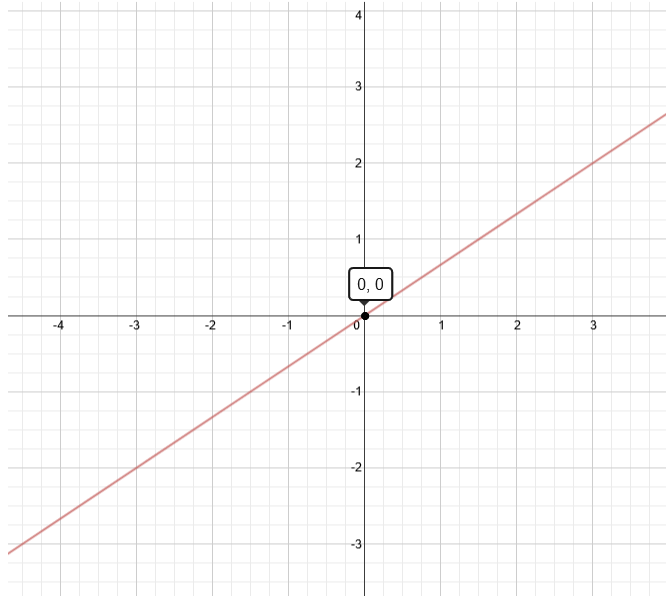 It’s pre-GCSE but he knows about -ve numbers/infinity so he’s either not read the question correctly/fully or it’s not well crafted.

There may be a few parts.

Demonstrate you can rearrange the formula (that would be worth some marks. It takes 2 steps)

Solve it for some values of y or x

… b) there is no maximum (infinity isn’t really a number. More a concept)

Sure, but I’d posit it’s a valid value here as x and y could always be increased whatever their values initially.

There may be a few parts.

Demonstrate you can rearrange the formula (that would be worth some marks. It takes 2 steps)

Solve it for some values of y or x

I think this is one of my hurdles with modern education.

I’d just give the answer, most of the time I’d be correct.

The modern marking systems to my mind are not well explained to pupils or parents, either that or I’m a really old codger.

Probably at GCSE level. I think the point of the question is the relationship between x and y.

I’d just give the answer, most of the time I’d be correct.

I’m old enough to have not done GCSEs. Generally I think demonstrating you understand something is better than just getting a lucky guess on the answer. Which is hard where the level is fairly basic and for some questions you just ‘know’ the answer.

When I did my maths degree there was almost no interest in getting the right answer. Demonstrating you knew how to solve the problem was the aim. Actually working out the answer was less important.

‘O Levels’ in my time, and I’d not even realised GCEs were replaced by GCSEs

I just find it extremely difficult ‘getting a handle’ on more modern education methods and assessments.

It has to be good that showing how you do something attracts marks rather than an absolute correct/incorrect, though I do believe that in many areas there are many systems/methods to get the correct answer so if you can just go straight to the correct answer why not get full marks? Admittedly a more risky proposition if you’re wrong or have made an error.

I just find it extremely difficult ‘getting a handle’ on more modern education methods and assessments.

When our kids were at junior school the school ran a session for parents explaining the ‘new’ maths techniques they were using. Very helpful if you had some grasp of the basics

There was always the kid who memorised the formula for solving quadratic equations but didn’t understand them. Proving you understand the concepts is quite hard

Just looking at it as a programmer (not the correct approach I know) my first response is:

It has always been the case, AFAICR, that simply giving an answer, even if it happens to be correct, is not enough for you to get full marks. 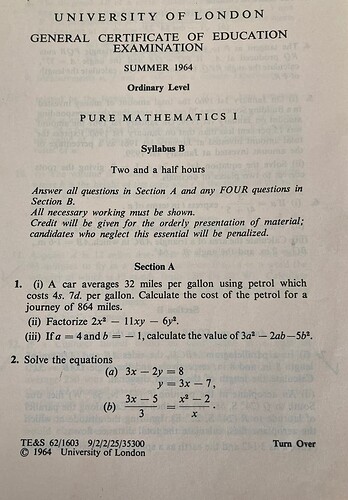 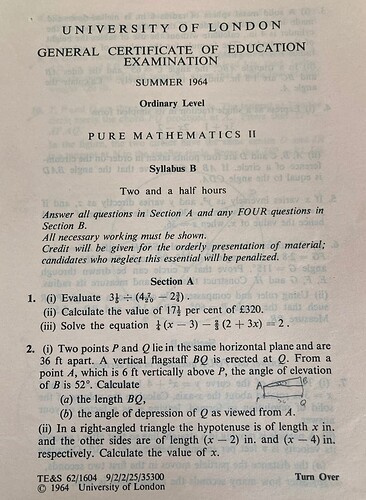 I taught GCSE maths for a few years. These questions would be way beyond almost all the students that I taught. I looked up some of the Joint Matriculation Board GCE exams for when I took maths ‘O’ level in 1966 or thereabouts, and they too were far more difficult than current exams. A couple of things, though. We had very little data handling in those days, and of course things like gallons and £sd are no longer a thing. Oh, and there is a ‘practical’ part to the exam now, which there wasn’t in my time.
OTOH there were two maths ‘O’ levels - the ordinary one that I took, and a higher maths, which included calculus.
CSEs were coming in while I was doing my ‘A’ level. They were incredibly simple.

It has always been the case, AFAICR, that simply giving an answer, even if it happens to be correct, is not enough for you to get full marks.

You may be correct, but if so we were never told that at school!

Several things seem to be done differently at school these days, which as a parent is quite confusing when you are used to older methods of calculation from O Level days.

It depends on the wording of the question. If the question says ‘Calculate the maximum force’ (or whatever) and you just state the correct answer (say, ‘400N’), you have to be given full marks since you have done what the question asked. Such an approach is quite a gamble, though, since even a trivial arithmetical slip (say, omitting a factor of 2 and only getting 200N) would result in you getting no marks at all, whereas someone who made the same mistake but clearly showed their working would still probably bank some method marks.

On the other hand, a question that requires that you ‘Show that the maximum force is…’, then a bald answer by itself would usually score a maximum of one mark since you haven’t done what the question asked.

I’m not sure that, at GCSE level, that distinction would be made. I could check, but I’m pretty sure that the examining boards advise that you always show your working. Of course, something trivial like asking what 2 times 6 equals then there is no working out to show. So a question such as “Write 2% as a decimal” would be worth one mark, and so no working out is required. Indeed, at Foundation Level there are many questions with only one mark available - so the answer is all that is required.
However, a question such as divide 72 in the ratio of 4:5, with 2 marks available, working out would be needed in order to get the 2 marks (showing that you added the 4 and 5, divided 72 by that number, then multiplied that result by 4 and by 5). Another clue is the space provided. If there is a lot of space, then you need to provide full workings out.
Questions can be worth quite a few marks ( 6, for instance). That, presumably, represents the perceived difficulty, but definitely requires lots of working out shown - and the wording doesn’t really indicate whether you need to show your work.
For instance I see one problem given:
Harry is paid £8.60 per hour for the first 30 hours he works each week. After 30 hours he is paid 1.5 times the hourly rate. Last week, Harry worked for 33 hours. He was also paid a bonus of 1/10 of his earnings for that week. Calculate how much Harry was paid in total last week.
That one was worth 6 marks. Although it said ‘calculate’ I think it is quite certain that they want all the steps shown.

I have always been taught to show my workings. Whilst school maths usually results in a single answer, that’s not usually the case in the real world. Communication is key. When helping my two sons with their maths, I always encouraged them to “tell the story”. One of them got it, the other resisted.

Mrs R teaches year 1 maths at the Open University. In addition to marks for showing working, there is an additional 5 marks available for “good mathematical communication”. Students do seem to make some effort in that regard.