I agree that the programme was distressing. But, very sadly, we live in a society with an ever increasing older generation of the populace.

Modern medicine is wonderful when it works, and very few of us would choose willingly to die at the average age of, say, our Victorian forebears. I certainly wouldn’t, even though I’m currently going through the first extended spell of ill-health of my life.

Thank you again for your good wishes, Ian. I’m aiming to have myself discharged at the end of the week, but things move glacially slowly here. The staff, kind as they are, don’t get the importance of having lots of new LPs to listen to*, and I haven’t even tried to explain that I’m worried that the new ‘Animals’ pressing may be sh*t, and that I’m running out of time to get it back to Amazon.

Try to find a copy of Karajan’s ancient first Planets recording with the Vienna PO for Decca, made when the orchestra could hardly have known even who Holst was. A spectacularly good (presumably Sofiensaal) recording. The Decca engineers in those days knew their stuff (around the time of Solti’s Ring).

If that’s the one that includes Don Juan then Amazon have got it. Have you compared it with Boult & the LPO?

He also played a scientist in the terrible 1978 film ‘The Swarm’ where he had the immortal line:

“The bees used to be our friends”.

Full agreement here Graham. Many of HVK’s late 50’s VPO recordings are the bees knees and IMO by far his best work. You won’t find a better Till Eulenspiegel than this one and because it’s a Decca, the sound is just gorgeous too. 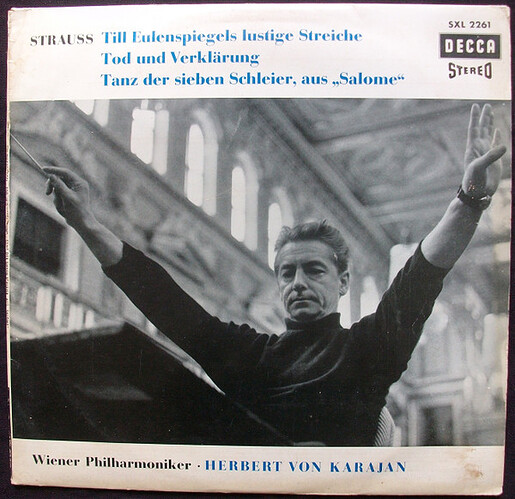 Boult made five recordings of The Planets, and he conducted the world premiere of the piece just before the start of World War One.

I have the last of Boult’s recordings at home, which I believe was his last ever recording before his death, but I’m not sure of its date (and I’m not at home just now to be able to check). It’s an absolutely thrilling, even savage, account, not at all what you might expect from a nonagenarian. It’s a special recording, as is Karajan’s Vienna account.

One other rather unexpected recording that I have and love is a rare outing on DG from William Steinberg with the Boston Symphony Orchestra. At the time of its recording, the American Musicians Union strongly objected to its members recording for ‘foreign’ labels, so it was something of a miracle that this one slipped through their clutches.

So there we have three great orchestras from the UK, Austria and the USA playing archetypical English music which doesn’t generally export well!

My Boult is the 1978 version, on EMI, which,according to that fount of all knowledge Wikipedia, was his fifth version. For sure the Classical Good CD Guide 2002 likes it.

The Planets has always been a favourite. I’ve also got the Lloyd-Jones + Royal Scottish National - mainly for the addition of “Pluto”.

I should look out for the Karajan. Is it the 1961 recording? This is the CD on AMZ: 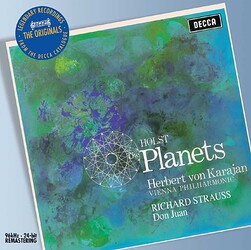 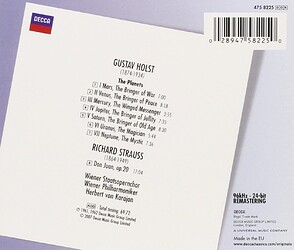 Yes, I seem to recall that Karajan made a very early stereo one-off recording of Beethoven’s Seventh Symphony with the Wiener Philharmoniker for Decca in the late !950s, which was an absolute cracker,

I say ‘one-off’, because it wasn’t made as one of the five Beethoven cycles that Karajan made, as follows:

This is all from memory, without access to my ‘stuff’ at home, so forgive me if I’ve misremembered occasional details.

So I mentioned that I had the Boult on CD: 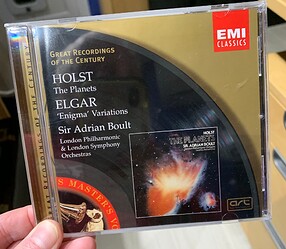 Always been fond of the recording, and I was starting to get a niggling feeling…you know how it goes. So I dived into the (extremely cluttered) study, moving half a dozen Lego boxes until I found my LPs. And came up with this: 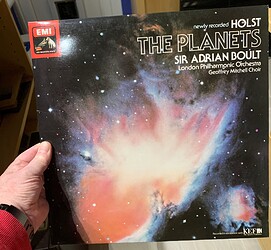 Continuing with the thread drift 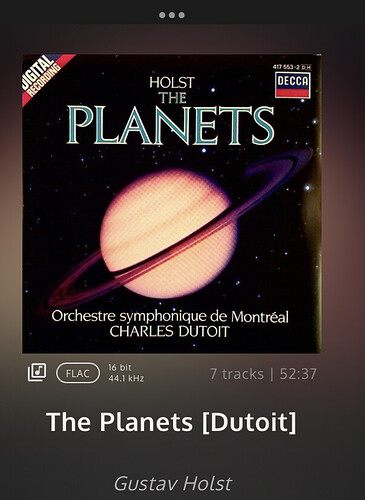 carer to her mother with dementia…

My mother had terrible dimentia that made her extremely volitile and quite psychotic at times. My father died, so her care passed to my wiife and I which was horrendous for quite a few years. It’s very emotionally taxing when it’s a loved one, like one’s mum. We eventually got her into a home, which is easier said than done, and were able to assist in her care from there.
I have the utmost sympathy for anyone that has to care for a family member that is in such a reduced mental state.

Thankyou……it’s a dreadful disease, hope they can find a cure. My wife is very worried that is her fate too😥

My wife is very worried that is her fate too😥

I have had the same thoughts for myself. Here’s hoping …

That makes 3 of us. My brother is at a fairly advanced stage and only in his early 60s. Gulp.

Cheers Gazza. Reasons to be cheerful and all that.

At 67, as of last week, & seeming surrounded by elderly, sick people around my age & a bit older than me, plus having an elderly family living 300 miles away, several of whom are in poor health, I find it very difficult to switch off (or perhaps ‘to escape’ is a better way of expressing myself) from health matters.

I have been very fortunate to enjoy good health all my life, apart from meningitis when 18, & have therefore automatically grown up with the belief that bad health is something that only happens to others & that I would die peacefully in my sleep of old age.

Recent experience of others has shown that this is unlikely. However, whilst making some conscious efforts to look after myself & pursue a healthy life style, I am determined (at present) not to make health & illness my number one priority for as long as possible.

I worked hard for 45 years to enjoy a comfortable retirement & wish to make the most of it doing the things I enjoy for as long as possible. My biggest goal is to see Norwich City win another (yes, another) major trophy before I die. I was at Wembley to see their first win in 1985. I do realise that this aim may be just a bit over ambitious but I live in hope!

I watched so many people at Ford soldier on until 65, so many died within a few short years it made my mind up to go early as possible. I was lucky to retire at 55 with no regrets.