A year ago, or so, I put together an active CB system (NAC62, NAXO2, HICAPx2, NAP250x2, SBLs). I had all of this serviced and to be honest it sounded very good. Sources are NDac and a Gyrodec/SMEIV/Kontrapunkt h (via Graham Slee Elevator EXP/Reflex M).

I also went on a buying spree for old shoe box preamps (12, 22, 32.5, 72) and every now and then changed the pre. I hate to admit it but the unserviced 72 sounds better than the serviced 62 (a bit more detail and a little more engaging).

I’ve now purchased an (unserviced) 52/SuperCap and wonder what to expect. I’m working away at the moment so won’t get home until late on Thursday but plan to power it up and let it warm overnight.

Quite looking forward to this, a shame the 52/Supercap wasn’t delivered in the CB trim though.

A 52 in good health is a wonderful thing, but as I found can also be a pig if it’s not.

I suspect after the long weekend it will be back in its boxes to go and get serviced.

I had a 82 then went pots 8 52. Mate after the NAIM 52/supercap service you will be thinking hmmm…give it time, I found about 3 months! Then you will be thinking OMG how good is this with a tear in your eye. The forum has/had some information concerning small tweaks not sure if they are still about? Just post a question and I’m sure you will get some very informative replies, they generally end up “I wish I never got rid of my 52” and “a very special preamp “ lol.
Be sure it’s got pots 8 try get some 4x135’s if space allows, with a good source it will be hard to beat.
I found my next step would have to be a 552/500 none DR. The synergy of the 52 to have all the pRat and some of the 282 and the refinement and some of any other naim bar 552.
An absolute game changer. Warm up from cold seems to be another little 10 day Journey that benefits can be had from around 2 to 3 days particularly in the bottom end. Like most naim kit racks and tweaking (cable dressing etc) is something to take note of. Hiline from the source is quite a good thing,the Nac 52 is so very musical spiritual and uplifting. Welcome to the naim nutter club, congratulations!
I’m sitting here playing “underworld, beaucoup” on my old cds2 hiline 52/135 Sl2 and I can honestly tell you it’s jaw dropping. I should disclose that I’m a bit of a mana rack freak and there might be at main spur going on too

I got home yesterday and connected the 52 up.

It sounded ‘OK’ about five minutes after switch on (I needed to make sure I’d replaced the 72/HiCap correctly). I used the nDAC to stream some stuff via Roon.

After a couple of hours I listened to a few tracks on it using my turntable (Gyrodec/SMEIV/Kontrapunkt). The phone input didn’t seem to work. Quickly took the covers off and saw that there were no ‘K’ boards fitted, just straight through boards. Reconnected with my Graham Slee ElevatorEXP/Reflex M phono amp. Pretty good. Certainly better than the 72.

Listening this morning it’s a lot better. I think there are ‘sharper edges’ and it the bass notes seem richer, actually it all sounds a bit ‘fuller’ but it’s the sustain on the bass that I’ve noticed the most and the soundstage seems less ‘smeared’ or maybe it’s easier to place individual instruments?

Sorry if you have already disclosed this, but what year does the 52’s serial number come in at?

I hate to admit it but the unserviced 72 sounds better than the serviced 62 (a bit more detail and a little more engaging).

It was always the case in my opinion.
I bought the 72 when they were new, as I preferred it over the 62.
Plus it had a few more useful inputs!

It’s a very early one, 1990. I think it has the old remote circuitboard (it didn’t come with a remote and that doesn’t bother me).
It has a couple of 528 boards which are on the second tape input.

I spoke with Naim before I bought it and it hasn’t been serviced at least not by Naim. From what I could see I don’t think anyone’s serviced it. So that’s something like 29 years since it was built, so maybe 19 years past when it should have been thought about! Still sounds good though.

In that case, definitely time for a service & POTS8 upgrade for the 52 and a service for the power supply…

It should sound a fair bit healthier then!

If the other box is a super cap like you say I wonder what happened to its 52 power supply?

It was probably upgraded to a Supercap. In which case the original 52PS inner tray is probably still gathering dust somewhere at Naim (unless they’ve all now been scrapped).

A few of the old 52PS units were converted into a sort of Super-Hicap, which was a great upgrade for a Prefix in particular.

Good question. The Supercap’s serial number is only 27 after the 52’s so I think it’s the original pairing.

But it is labeled as Supercap and would have been initially a 52PS I guess as Richard said. Seems a little odd that this isn’t down as a service though since that would have been done in 95 or later I think?

When the 52PS was upgraded to a Supercap, all that was done was the 52PS sled was pulled out and a new Supercap sled was put in. The original Serial number was transferred over from the 52PS to the Supercap.

As Richard said it was changed to SC back in the day.
I guess you have to have a look under the hood, you “may” see these older caps as opposed to the black ones they use these days. This is from one of my previous SC services. Just couldn’t bring myself to throw it out. 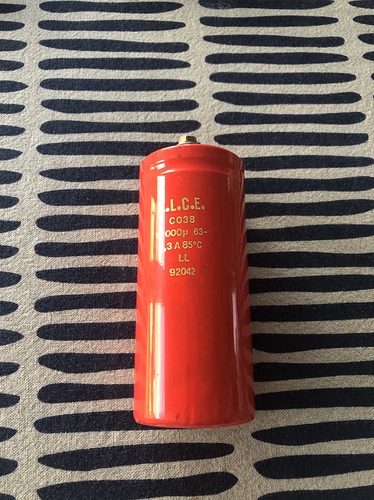 I’ll have a look when I take it out of my system before I send it off for service.

I think the large electrolytics generally have a date code on them so that may give a clue as to when it was last serviced.

From information from Darran at Class A; if the Supercap sled had caps over 18 months old it was serviced by Naim before going back to the customer.

I’m not sure I understand - the Supercap would have been brand new and just built.