I’ve searched quite a few threads and there seems to be more discussion on the 600 and 800 Ovators.

I’ve come across a pair of S400 for a good price and considering upgrading my Kef 104.2 Raymond Cooke editions. I’ve used these speakers with various naim amps from a Nait 3, SN, 250, etc, to my current SuperUniti and I’ve been pleased with them.

My listening room is medium size and the speakers are positioned around a fire place and the rear wall has an L shape to it. The left speaker has plenty of space behind and on the sides but the right speaker will need to be about 8 inches, less if possible, from the wall (rear) with plenty of clearance on the sides.

The Kef’s sound great, soundstage, depth, presentation, are all good. But they’re quite old now and I’d like to find a replacement.

The S-400 doesn’t seem to get much love here but I’d like to hear some impressions b/c I’ve never owned a Naim speaker and not sure what to expect. From my reading it sounds like the 400 is more forgiving of room dynamics than it’s bigger siblings but I’m not certain. Thanks in advance.

It’s so hard to advise you without falling back on ‘you must listen for yourself’. Some people like them, others don’t, and you may fall into either camp. It’s far from ideal having one speaker much closer to the rear wall, as their bass response will be different, but I suppose that’s something you live with now.

I’ve no idea what your Kefs are like, but don’t fall into the trap of thinking that because they are older they are no good. Plenty of people on here are still using Naim and other speakers from the 80s very happily.

I really, really, wouldn’t buy speakers without listening to them, unless they are so cheap that you can sell them with little loss.

Thanks, Nigel, the seller is motivated to sell and I’m getting a good deal so I don’t think I’d lose money. Ideally I could demo them but that’s not an option. It’s mostly just a time investment and I clearly have time to fuss over my hifi kit.

I’m on the fence and I think I’m just looking to get pushed off in one direction or the other.

Some times if you cannot listen you just need to enjoy the experience even if you lose a little on resell…its a fun thing and hobby for me?

Yes I agree with Gazza. If you feel like taking a punt then take a punt. You may regret not doing it more than you would regret losing a few £s if it doesn’t work out. But I would hang onto the KEFs for the time being and not trade them away.
Best
David

Couldn’t agree more, I had a pair to replace my Allaes, tried everything to get them to “work” really wanted to like them but they were terrible. I kept my Allaes which have to be the hifi bargain of the decade.

I had the superuniti and Ovator 400 combination for 2 years in a medium sized room and found it to be most excellent. The Ovators had replaced some old Rega Juras. There was a much more precise rendering of detail and presentation of the music overall was just lovely. I still own the Ovators now but have upgraded the amplifier. So overall I would advise a trial as they seemed made for each other.

Thanks, I was hoping someone with experience with this combo would give their impression. My hope is this speaker will work for me until such time I have a better listening room.

See how it goes. Back circa 2012 when the Superuniti first came out, naim demoed it at shows with the Ovator 400 to show what a relatively entry level combination could do. I remember reading an article about the Rocky Mountain show of that era, stating the Superuniti , Unitiserve and Ovator 400 was one of the best sounding systems of the show regardless of price. So you potentially have a great system in the making.

I run S400s with a 172/200 combo. Can’t say they sound veiled at all. I have also tried the Nova, which was a better sound, but not a big enough step to go swapping. But shows modest amplification works with the S400s.
I get to hear active Isobariks reasonably often, (and used to own an early pair too). Though not as weighty I think the S400s are quicker.

What was the rest of the system?

I’ve heard S400s only once, and that is how I’d describe them. But I heard them in a very dampened room at my local dealer, which does contribute to that sound from other speakers as well.

Brilliant Loudspeakers. I have not heared better for organ music or (hard)rock. It really depends on your room / type of music you listen to / how you are biased.

Some people mention veiled, but this is a thing I absolutely don’t understand. I would suggest that they are the opposite. I have 600’s (which is different to a certain extend) but they felt to me like a ‘source upgrade’. It really undusted the music and made me discover omissions in recordings.

The BMR is fantastic - almost ESL like - as well as the bass control.

I think the Ovator have something in common with the SBL, when they do not make music, it’s the installation that must be started again…

An interesting post. I notice this speaker does tend to divide opinion, and I am wondering why that is. Maybe placement and room acoustics is a factor here, but I distinctly remember feeling profoundly disappointed with them.

What is it about the design of this speaker that makes opinion so divided?

Dave, im lucky and have 3 simple Naim setups. This allows me to choose where to listen to the music. If I could have only one setup, I would probably not choose Ovators. However, the attack of a bass guitar in rock music, or the thunderous low end of a cathedral organ is really something on the Ovators. Singer songwriter kind of music - e.g. Katie Melua or similar is like angels singing in your ear.

I was not able to get symphony orchestra music working fine on them unfortunately. I would choose my SBLs for that.

If my wife would force me to choose, I’d take the SBL’s. Better all round.

I have used my Ovator S-400 with a Nait XS 2 and my current SuperNait 2 and love them.

I had a pair of ProAC D2’s with the XS 2 and moved to the Ovators when a used pair arrived in my dealers showroom. I gave them a demo and have no regrets.

The bonus was the wife loved them as well, for the sound and the looks. 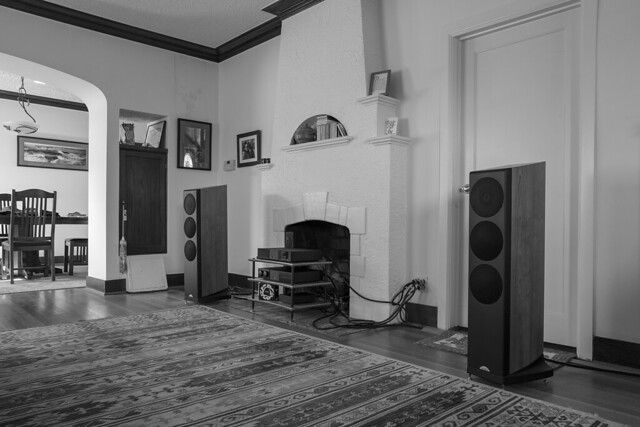 I would give them a demo with your SuperUniti and let your ears help make the decision.

Mr Marko - think you should press on with the 400s. They do not sound “veiled and constrained” - they are Naim speakers!
I have used mine very successfully for many years having owned their predecessors SBLs and SL2s. They are certainly easier to set up and use than those guys - I used my 400s originally with a Supernait 1 and they sounded superb.

Two things I’d draw your attention to: firstly they do benefit from improved and dedicated amplification. Once I added a NAP200 to the SN1 they really started to sing. Secondly - although they are not that fussy about placement I found that if placed very close to a back wall they can sound a little boomy. Move them forward a tad (maybe only a few centimeters) and that improves them.

Have you got someone that can come and unload/unpack/install them with you? They are damn heavy.

I hope you go ahead and enjoy them. Best of luck.

Well, they certainly sounded veiled and constrained to me at the time! In fact I would go further and say they sounded nasal and sibilant. I remember feeling quite disappointed at the time. I note your point about better results being obtained with an amplifier that is separate from the Uniti. I heard these connected to the original Uniti (which is what I have), without this addition so that might have been the issue at the time. I have since had my Uniti upgraded for 24-bit audio and had a NAP200 (which I have since upgraded to a NAP250DR) so the result with that combination could have given a very different result.

I just find it strange that opinions about this speaker are very polarised, and I’m struggling to think why this might be. Do they work OK only under certain conditions?