Over Voltage causing Hum on HiCap/NAP

If you been on this Forum for a while, you will know there are several reasons for a Naim Power Supply or Amp humming. Here is my story on one particular possible reason.

I’d noticed a Hum on my HiCap and to a lesser extent on my NAP 140 when they came back from service. I couldn’t be sure if it was down to the service, or the fact that I have only recently been focusing on the HiFi since retirement.

Anyway, after reading many articles on the Forum, and eliminating other items on the Ring Main potentially causing this, I came across a possible reason as being Over Voltage, which as the phrase would indicate, the Voltage levels are too high. Now in the UK, the Voltage to your house should be 230V with a tolerance of -6% +10%, giving an upper limit of 253V. A typical supply will vary in voltage throughout the day, and will be at its highest when the substation load is at its lowest, but should never go outside the defined tolerances.

Using a multimeter, I measured 254V in my house. I was then able to look at one of the sets of data from my Solar panels, and I was able to see that during daylight, I was averaging 255Volts. I could also look at stats from a year ago, and saw the same high figures, so it has probably been too high for a while.

I logged a ticket with my Electricity Suppliers, and they said they would be out within 3 hours. To my amazement they were, and confirmed a 254V measurement at my local Substation. Two of them worked in the substation, and found that the substation tapping was set to 4, which was not the standard of 3. They temporarily dropped the voltage to 240V and I noticed a big improvement in the Hum which would have been perfectly acceptable. The graph below shows what happened to the Voltage when they first dropped it. Unfortunately when they completed the work, the hum was mostly back, with a voltage of around 249V.

Over the following days, I monitored it, and it was now averaging 249V with a few instances of just over 253V. Armed with this, I thought I’d try them again as they were so helpful. Again they came out within 3 hours. This next phase took a little longer, but they did remain helpful. To help eliminate, or point the finger at my Solar Panels, they placed a recording meter in my Meter Box, and another in the substation for a couple of weeks. Some of those days, I would turn the Solar Panels off to help diagnostics. Thankfully they found that the values at my house was in line with that at the substation, helping to eliminate the Solar Panels as a cause, and put the focus back on them.

They now had three ways they could fix this: 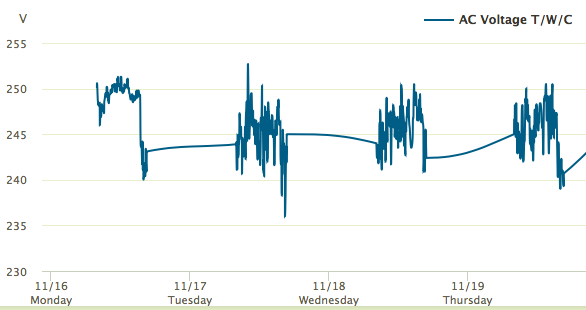 The all important question, how’s the hum? We…ll, all I can say is that it’s better, but not as good as I would ideally like, so not too surprisingly there may be more than one reason for this particular hum. It must be said that Over Voltage is not a common Hum reason, but I thought worth documenting for others out there.

This is probably one of the instances where an active regenerating power conditioner is justified and the lesser of two evils. The Naim mantra against them is misunderstood. They should never be used in scenarios where there isn’t a specific audible problem. Clearly here there is. Overvoltage is a common problem but not by as much as you are experiencing. Also, once a toroid starts humming, it indicates the core is likely saturated and suddenly your EMI quiet toroid is not just mechanically noisy but noisy from an EMI perspective too. Toroids only outperform EI transformers when the mains source is free from overvoltage and DC offset.

Several audiophile conditioners on the market fully reform the sine wave and regulate the voltage. I’d consider one, and then just stop using it if you move.

I have read that as a possible solution, but thought I may as well try the free option of going to the electricity company first. I also dont have a dedicated HiFi supply. Also as there was over tolerance, it is their responsibility to resolve it as it can potentially damage appliances.

Although the whole process has taken 2 months to date, they were very helpful and friendly throughout.

Other options are balanced power supplies that can also drop voltage, but they seem to have some negative aspects to them, so not always ideal.

Other options are balanced power supplies that can also drop voltage, but they seem to have some negative aspects to them, so not always ideal.

If they are doing that then they aren’t strictly balanced. As they should be 1:1 and simply providing galvanic isolation between the two circuits to mitigate noise and DC offset. It is true that some devices incorporate a conditioner followed by a balanced transformer in series in the same box.

I agree that fixing the root cause is always preferable to using a power conditioner. And for this type of issue, at wouldn’t be a mains block shaped one but an [expensive] active unit that sits on the rack. But if the power co cannot fix it then you might not have an option. I do feel that they should be on the hook for potential damage to any and all appliances though.

I suspect this issue may have been there for 25 years when the substation was installed, thankfully not had any issues (that I’m aware of). It might explain why my food mixer always throws flour in the air, even on lowest setting

Interesting, i am facing exactly the opposite in term of voltage, but this doesnt affect the sound here, so sounds like low voltage is better than highter one. 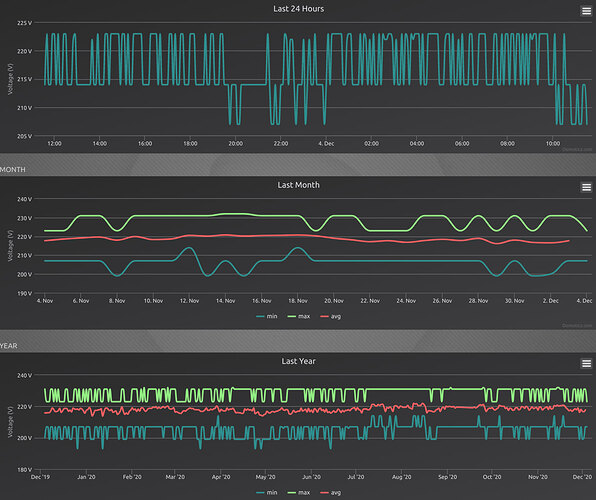 Wow, so that is below the tolerance they are contracted to provide. It sounds like there is some heavy load on your local substation. I would give them a call, as they do have a few options, and it might be a simple incorrect setting. They dont normally monitor the secondary substations, so to be fair, they wouldn’t know.

In terms of SQ, I dont think it would be effected, but remember that the appliances are designed to operate also within the countries tolerance.

Just to confirm, the Hum is from the device itself, and not through the speakers

I suspect the hum is not to do with over voltage at all, more likely to DC on your phase through unbalanced phase loading or bad power factor loading at your substation/distribution transformer. I guess a headache for power distribution companies… perhaps a consumer from the substation needs to be using multiple phases and using a single phase instead or badly designed power factor correction.
Anyway as you say it’s upto the power distribution company to resolve, assuming you are not causing it…

If you have the tools you could see what your power factor looks like… ie is your current 90 degrees apart from your voltage, or is it noticeably less than 90 degrees when you hear the hum.

I suspect Simon it is 6 of one, and half a dozen of the other. When the electricity people first came, for 30 minutes they dropped it from 255-240 Volts, and that did make a very noticeable difference, but not a complete fix, so yes, DC Offset is the next most likely. No doubt you have seen my other thread on discussions of the other potential causes.

Ok I hadn’t seen your other post… in my experience non load related transformer hum can be often a result of ‘DC’ on the mains… or more accurately asymmetric mains compared to ground, or bad power factor correction where the reactive elements can interact with reactive loads… and much has been written over the years on the forum, though interestingly less on power factor issues, perhaps is harder for some to understand.
Highly efficient transformer such as large toroidal transformers suffer more as they saturate more easily.
However it is something to address, as a saturating transformer can produce horrible shaped waveforms into the PSU.