I wonder if I’m allowed to talk a bit about some non-Naim hardware here. I’m very interested in people’s experience.

In the past couple of months, I’ve been immersing myself in the world of personal audio devices (DAPs) and in-ear headsets (IEMs) - in short, today’s high end version of the walkman. In some ways, this endeavour is proving to be a copy of my audio journey, with a similar mix of revelations and frustrations.

I started off with what I already had available - a pair of Audeze Sine on-ear cans and Sure 425 in-ears, driven by a Sony ZX100 hires player, a combination that I’ve always felt sounded second tier, somewhat congested and lacking dynamics, and ultimately worse than an iPhone with apple’s buds.

A visit to a specialty shop ended up with a Fiio M11 Pro. Compared to the Sony and the iPhone, this sounds brilliant - open, dynamic, with an even representation of the audio spectrum from sub-bass to treble.

Running the Fiio for a while, however, made me realise neither the Sine or the 425s are very revealing headphones - a second visit, and a lengthy trial of a large number of IEMs, resulted in the purchase of a Campfire Solaris. Now, if you’ve never heard IEMs at this level, you’d be amazed how good these sound. Easily the equal of any large headphone gear I’ve heard, and that includes the top STAX series and my current Accuphase / Audeze LCD-XS set-up. A further benefit of IEMs is that your ears don’t heat up from the cushions, and they are more comfortable for extended lengths of listening time.

The Solaris are very sensitive IEMs, and they reveal a slight waterfall hiss on the M11 Pro when the environment is quiet, and music plays at low volume. It turns out I’m overly sensitive to this hiss - others don’t seem to hear it, but to me it’s hard to concentrate on the music itself after a while. Therefore, a couple of weeks in, I went back to the store, to check out if there are DAPs with a lower noise floor or better impedance matching, to get rid of the hiss (I didn’t / don’t want to get rid of the Solaris now that I know how good they otherwise are). This is where I am today - I am trialling an Astell & Kern SE200, a more expensive but also quieter DAP. The hiss is still there, but I would guess there is around 3-6dB less of it compared to the M11 Pro, Switching over to balanced inputs, the hiss is amplified somewhat, still low on the A&K, but it makes the M11 almost unlistenable.

Does any of this (the musical journey, not so much the waste of money) resonate with anyone? I wonder if I’ll ever find the holy grail of open and dynamic portable music with a noiseless background, or whether I’ll have to pick my poison. Specifically, I don’t think there are any DAPs with a lower noise floor than the SE200, currently. I’ve heard the SP2000, its bigger brother, and it doesn’t improve on the noise floor at least. The top end Fiio and Shanling players are noisier. However, if an IEM exists that has the musical qualities of the Solaris, but with less sensitivity, I’d be very interested.

You are most certainly allowed to talk about non- Naim hardware

I am clearly not as sensitive to low level hiss. These are my tools for personal listening. Astell&Kern SR 25 with Diana earphones. Sounds excellent, but didn’t spend too long choosing it, I wanted decent performance from a good quality maker and this absolutely fits the bill. Much more revealing than my home setup, but more clinical as well. I would trade some definition for involvement, but won’t be changing anything this side of retirement. 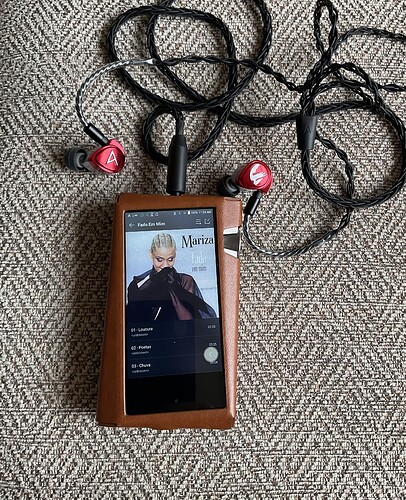