Postie brought the new Lana Del Rey album on vinyl today and like many vinyl purchases now it came with a card with a download code. This is what the metadata in the downloaded files looks like, absolutely nothing of any use! Come on record companies, it isn’t difficult to include some metadata.
Also, WAV format downloads? Yes it is nice to have a lossless download but at least have them in FLAC so the download is half the size. I know this example is this particular album but so many others I’ve downloaded are the same. 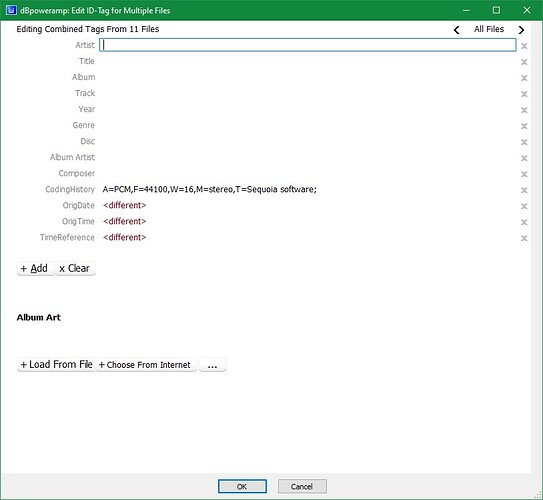 You’re lucky, the few records I’ve bought with available downloads, the format offered has been mp3 only.

Yes, too many of them as well unfortunately

It’s a five minute job to convert to flac and add the metadata. Easy peasy.

I know but it just annoys me that I have to do it, why can’t the record company just do it

There are many more important things to worry about. Five minutes now and then is hardly an issue.

I’ve had the same with my PJ Harvey albums. They come from Sound of Vinyl but others may be different. At least it’s a proper lossless download.

Metadata is frequently missing or inaccurate on many of the classical downloads I purchase. The price for high-res downloads is usually considerably more than the price of a physical CD, despite the latter having higher manufacturing and distribution costs. For the greater purchase price of downloads, I feel strongly that one is entitled to find correct metadata included. The same surely applies when one has purchased a vinyl album - these are often very expensive!

This is not something I will ever do but I buy albums (downloads now) at a rate of broadly 1 a week i.e. 4 or 5 pcm. That 5 minutes soon turns into 30. It will also require some people to turn on a PC that wasn’t otherwise on and will often require an irritating amount of cross-checking.

I’m afraid for me this is absolutely on record companies. They want a world of low margin, high profit downloads but that includes an amount of corner cutting which is often outrageous.

The downloads being discussed here are the free WAV downloads that come with some LPs. If the record companies were as penny pinching as you make out there would be no download in the first place.

It’s simply part of computer audio that downloads need to be checked and metadata often changed. Genres are often different from how one chooses to categorise them, and artists can differ too. I add the composer to the beginning of my classical albums. It’s impossible for the company to get every piece of metadata right for every customer so it’s almost inevitable that something needs changing. It’s unrealistic to expect anything different.

Maybe so but for a pop/rock album surely Artist name, album name, track name, track number and some artwork as a minimum is not too much to ask?

I’m aware of what’s being discussed and no-one would expect perfection. Now let’s go back and look at that original image above!!!

Out of interest I’ve just done a quick trawl for those CDs I have which came with download codes etc. I’m still at my work PC in the study so I booted up the home one whilst waiting for several hundred test and trace referrals to move from an email folder to a shared drive and I took a look.

8 downloads. Around 8% of meta data completed.

My point remains that, as per the OP, there is no such thing as just five minutes with meta data.

There is with me. I’ve become something of a metadata whizz.

I’ve 1983 rips of which about 1000 have the date of the CD release rather than the date of the original release. Lord knows how many Trashcan Sinatras scenarios I have. I’ve managed to get genres down to 65 but No Genre still has near 3 figures in it.

I have 16 genres and use them to search most of the time. It works well for me. The key is to be ruthlessly efficient when ripping. Get it all correct initially and then forget it.

Compare the original post with the Mogwai 2018 album on Bandcamp, much more like it. Why can’t they all have that as a minumum? 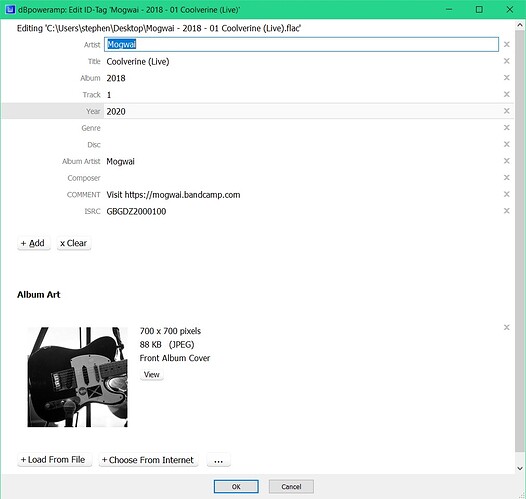 This could start a meta data revolution… or war

If there is a flac version download that it will have the metadaa. WAVs always been flakey on metadata.

Here you go. And for @mikehughescq too. It’s based on how Mrs HH and I choose music. The pop- rock catch-all covers everything from the pictured Shirley Bassey to Nirvana. A few artists have genre tags for two categories, say folk and country. It’s very simple - some would call it simplistic - and won’t work for everyone. The chamber music category is for solo instruments, duos, trios and quartets - not chamber music per se. Any larger classical albums go in classical. I also have two ECM categories as I have loads of their albums - they could equally be squeezed into jazz, chamber or classical, but are often hard to categorise so I gave them their own genres. As I say, it works for us. The important thing is not that it’s technically correct, but that it enables one to find one’s music. We have the best part of 5,000 albums squeezed into these 16 genres. 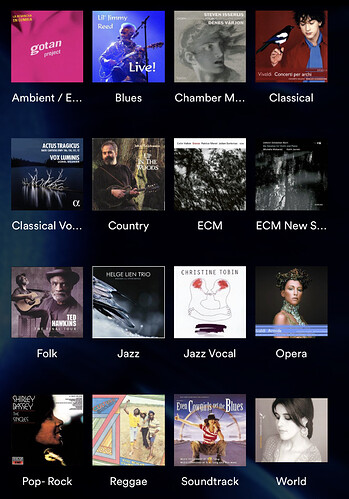