Please forgive what may seem like a silly question. I picked up an RCA to DIN cable for a Rega phono stage and am wondering if any particular input on my Supernait 2 is optimal. I notice the AUX 2 input is powered. Can this be used with a phono stage other than a Stageline/Superline? If not, which input should I use? Straight RCA is also an option if need be.

Just use any of the other din inputs. Aux2 has a different din pin shape so doubtful your cable will fit. (Aux2 is 240 degrees, the others are 180).
If you look at the pins closeup you’ll see they’re not the same. 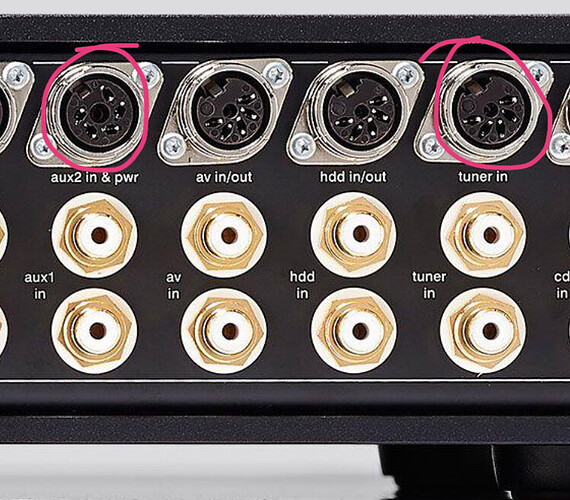 After some experimentation I found my Flashback Premier RCA to DIN was unexplainably better than my Van Den Hul D102 mkII RCA to RCA’s - they were sold and I moved all my cable RCA to DIN.

Good to see this confirmed. Perhaps Naim have been right all along…?

Yeah I was pretty sceptical (as I am about cables - although always buy decent stuff).

(As for the BNC’s on my NA62 - immediately swapped to Neutrik RCA’s as the BNC to RCA adaptors were just not as good).

I am happy to have any “Fairy Dust” I can, in terms of good/better cables, etc. BUT - what I won’t do is spend a lot of money on them. So, I have either Naim’s own cables or Chord.

I avoid any Adaptors - just NO. I have BNC’s on the cable from my Linn Ittok, which connect to my Naim 82 pre. These were dealer fitted, many years ago - to avoid using an adaptor (the Ittok originally came with Phonos).

Absolutely - I think there is a sweet spot in cables - Naim genuine are great, and the reputation of Chord, CHC, Flashback for quality cables makes them a clear choice without going to crazy lengths.

When I found out in December, it had not been long before some cables had arrived from Dave.

Service was always exceptional, the cables are great, pricing very fair and are almost every cable I have on both my Naim systems with a few exceptions.

Another ‘sleeper’ cable is Linn K20 - which is effectively Naim NACA4 - or was said to be. YMMV, etc.

Relatively inexpensive and readily available, if someone wants a ‘Naim compatible’ speaker cable, for not much money.

Absolutely - I use Linn K20 on my NAC62/HiCap/NAP140 set up and it works brilliantly - and is more flexible than my NACA5.

Another ‘sleeper’ cable is Linn K20 - which is effectively Naim NACA4 - or was said to be.

I’m told they are similar but not quite identical. But similar enough that the company who made them settled with Naim and the proceeds went towards the development of the superior NACA5 speaker cable.

There are a number of cables that are similar to K20, NACA4 etc… Cable Talk was a very popular one at one point IIRC.

A4 had just come out then - my cables have no Naim branding on them, nothing. That came latter, I believe.

@Richard.Dane - I was told that the company involved was BICC. Who were making A4 for Naim, and decided to make ‘similar’ cables for both Linn & Exposure… So I was told… (by a then Naim dealer, in Loughboro’…) .

Yes, IIRC it was BICC. Its was Naim’s design and cable that they made for the company. I believe they then made a version of it for others, but it was similar enough that it effectively infringed on Naim’s design.

I guess Naim had not protected the design (of A4), in any way…? Or got an agreement in place with BICC, to not clone it for others…? But - the result was the development of A5.

I don’t know the exact details but the settlement was enough to fund development of NACA5, so it all worked out in the end…

A friend of mine claims he sold the remaining stock of what was Chord Chrysalis and is still Naim Lavender to Naim when production ceased. I’ve never known whether to believe him as he was a rep for a company that made cables at the time. His name is Dave though we call him something else.
Anyway Chord haven’t really replaced Chrysalis with anything as good at anything like the price judging by the last two generations of their cables that I’ve sampled.

Flashback is closed. David passed away from cancer on dec 4, 2020

If you read the thread you will see multiple mentions of that above from several users including myself.