There are some ongoing issues with Qobuz in Roon unfortunately, that mess up finding stuff, saving it to your library and then randomly disappearing. It’s meant to be getting fixed by Qobuz but has dragged on now for too long really.

There are some ongoing issues with Qobuz in Roon unfortunately, that mess up finding stuff, saving it to your library and then randomly disappearing. It’s meant to be getting fixed by Qobuz but has dragged on now for too long really.

Ah thank you - missed that…

So it’s qobuz issue to fix rather than sitting in Roon’s backlog? …I’ll have a search for other threads on this as it sounds like I’ve slept through it! 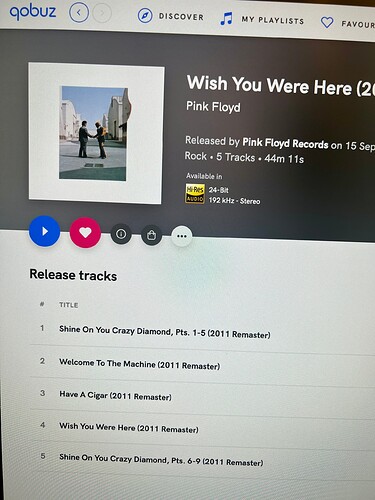 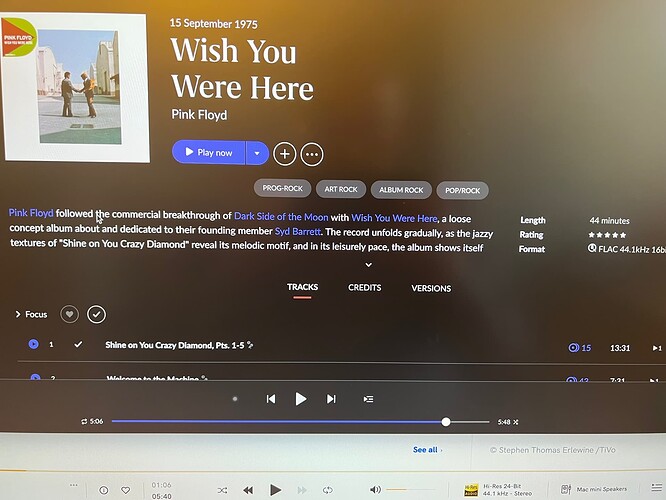 This is what I get: 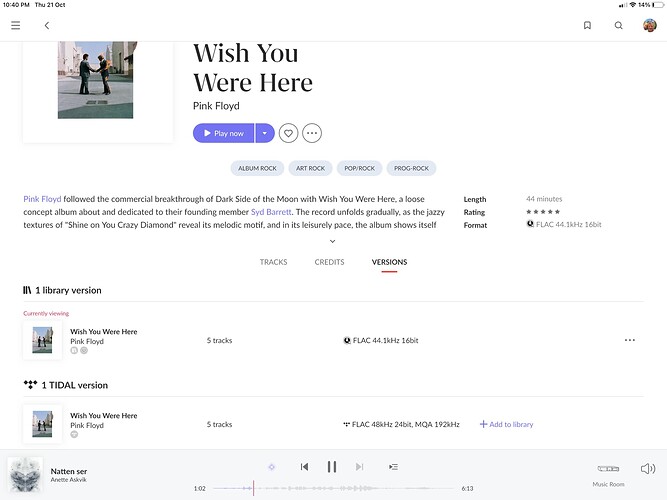 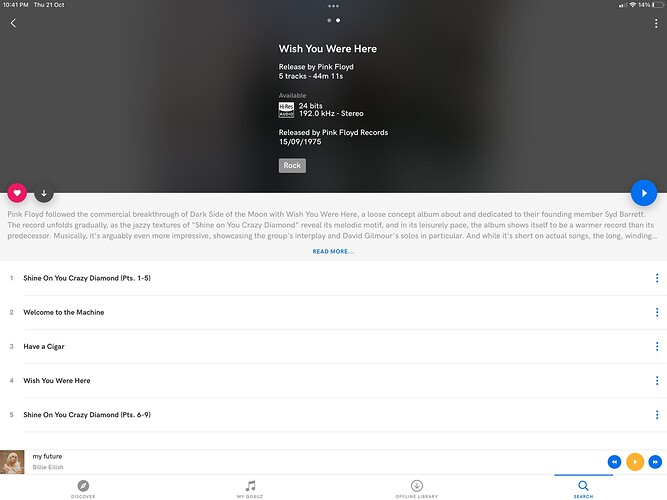 Roon say the issues with Qobuz, but if it shows up in the Qobuz app and not Roon….

Exactly the same then - great - thanks - I’ll stop restarting Roon and checking my Qobuz subscription now!

It appears that the Qobuz 44.1k tracks selected play at 192k so a reporting issue through Roon.

Some comments about this on Roon forum.

Didn’t hear any difference in SQ but tat could be my cloth ears.

I don’t use Roon, but I had a listen to Meddle today (shows on my DAC/in Qobuz as 24/192k, of course). Honestly, I’m not certain what to think. There doesn’t seem to be much in it.

The issue of Floyd albums listing as 44/16 but playing at 192/24 is also an issue with the Innuos Sense app, so not a Roon problem, suspect Qobuz are the culprits.

I knew there was a reason why I’ve stayed with my home server and ~1800 albums on it. Stuff like faults in gapless playback BUGS me.

Has anyone here heard the newly released Re-mastered 24/192 DSOTM?

When I looked Qobuz didn’t have DSOTM or Pulse

I’ve got the 96/24 WAV file and think it’s a definite improvement over my 30 year old cd but there’s some here who are not so keen.

I tried the Tidal MQA version and thought it was pretty good. The Qobuz version is showing in NZ now, so I’ll give that a whirl later.

I got mine from HD Tracks, there was an issue with the metadata but after a frustrating hour managed to sort it out. As per my earlier posts I only have a 30 year cd to compare it with. My old cd always sounded flat, this hi res has brought it back to life. I’d be interested in what you thought,.

I got side tracked on Black Sabbath sorry. I have a rip of a friends CD and the recent LP remaster, so three versions to compare. I could be a while and the girls are due back in a few minutes and I will have to have a break….I might be able to sneak in Time to test the drums….

I emailed Qobuz support regarding missing albums/artwork in Roon searches, also disappearing Qobuz favourites from Roon and they responded:- 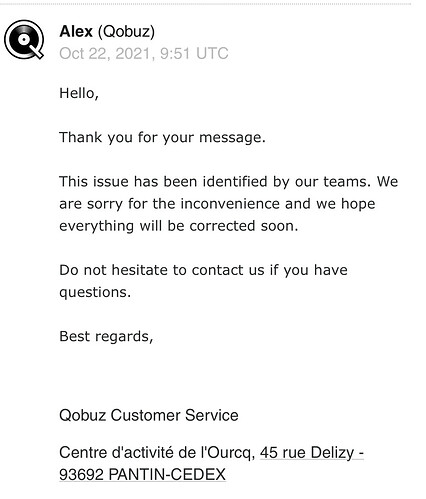 This problem has been around for a few months and I’m not hopeful of a fix in the short term.

Pink Floyd really need to get to grips with this nonsense, and sort it out properly, once and for all. After all, they collectively own the copyright in the recordings and they alone can decide to put out their albums.

So, why not clear the decks and get Mr Guthrie (or whoever they choose) to remaster all their recordings in state of the art sound, then release the entire back catalogue? How difficult can this be? (Not very, I suspect.)

I won’t go anywhere near this pile of horseshit until someone gets the job done properly.

Saw an update on the PF official website. So this all appears quite legit!

Most Pink Floyd albums have been released digitally in UHD (24/44.1 to 24/192 bit rate) – a format which provides a far superior quality than standard CD whether streamed or downloaded. You can hear them on Tidal, Deezer, and Amazon Music.

The immersive audio treatment of Sony’s 360 Reality Audio and Dolby Audio enables the listener to hear subtle nuances in the mix, the positioning of the guitar, drums, etc., and be able to experience the songs as they would sound in a live environment.

360 Reality Audio is a new immersive music experience that uses Sony’s object-based 360 Spatial Sound technologies. Individual sounds such as vocals, chorus, piano, guitar, bass, and even sounds of the live audience can be placed in a 360 spherical sound field, giving artists and creators a new way to express their creativity. Listeners can be immersed in a field of sound exactly as intended by artists and creators. Music content created in this new format for 360 Reality Audio can be enjoyed through compatible music streaming services, Amazon Music, Deezer HiFi, TIDAL HiFI, and Nugs.net, while the Dolby Audio versions can be heard at Apple Music.