I’m thinking about getting this album on vinyl. There appear to be two versions of it available now, a recently released 2xLP on blue vinyl and another remaster/reissue from 2011 on 2xLP black vinyl.
Looking at reviews for both of them over on the river there’s quite a few complaints about poor SQ on both of them as well as skipping on some tracks, whereas other reviews say that the SQ is excellent on both versions.
Given that I value the opinions of the good folks on here over those on Amazon, I’m looking for opinions on which version is best to buy, or should I be trying to find an original pressing or even not bothering with vinyl and get it on CD?

I have this one 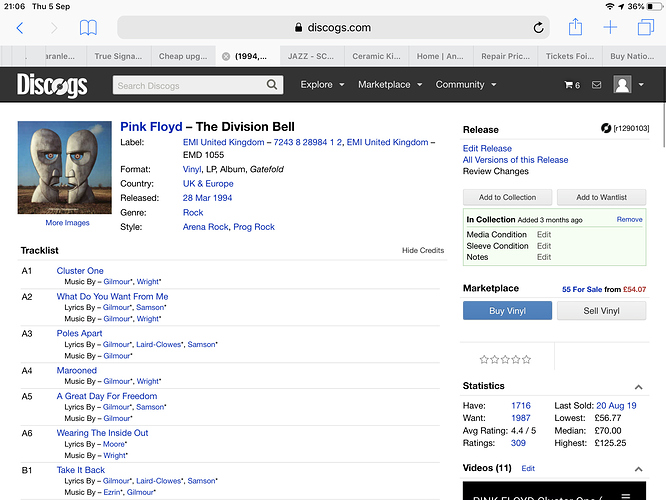 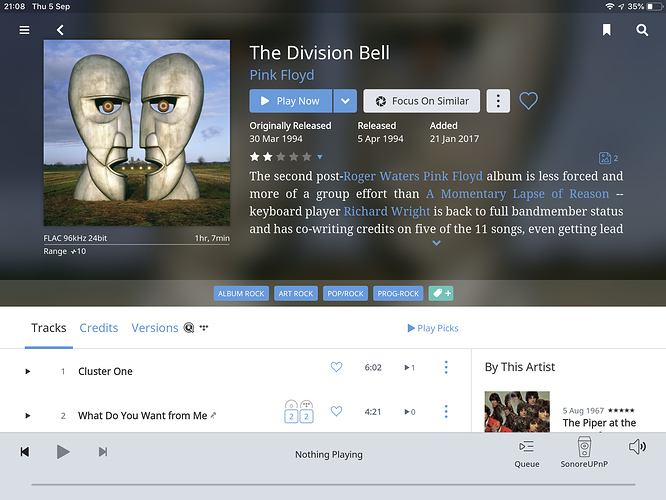 I don’t think I want to be paying £55+ for an original pressing. I’m not really in to streaming either and certainly don’t have any hardware to stream hi res flacs

I have it on HiRes download 24/96 FLAC and it is really well mastered, which cannot be said for all hires downloads. Shame that’s no use for you. 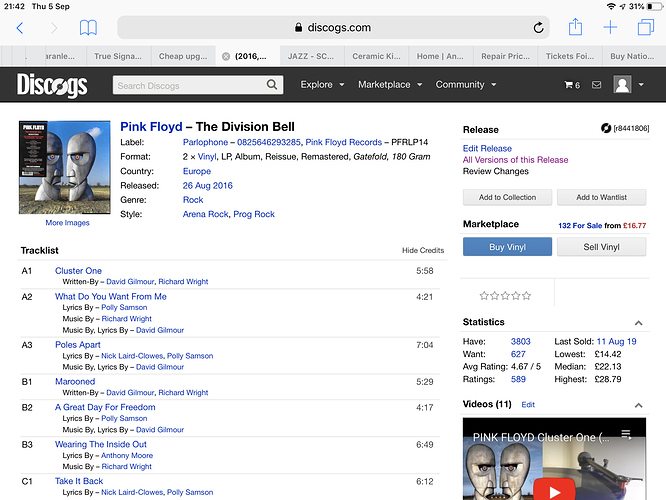 However I agree with with @T-elmi the 24/96 is well a mastered version. In fact, just switched “RTE’s Prime Time” off and silenced the ongoing analysis of the British political landscape (as it is quite important to the Republic of Ireland & Northern Ireland!) and pressed play on this album.

As a holder of a good collection of Pink Floyd vinyl, including MoFi UHQR DSOTM, as well HiRes recordings, you should invest in a streaming solution - it compliments vinyl quite well.

The 2014 double black vinyl (unedited) is very good however. I’ve got the 2019 double blue but have never played it. The 24/96 Blu-ray version is excellent as well.

As a holder of a good collection of Pink Floyd vinyl, including MoFi UHQR DSOTM,

What is that like @simon.pepper? Never heard it. I don’t like the standard MFSL of DSOTM, as it sounds rather too “soft” for my tastes… is the UHQR better?

Shame you’ve never played the 2019 double blue as it would be nice to hear how it compares with the 2014 double black. I’m not too fussed about having blue vinyl but obviously if that sounds better than the 2014 edition it would be the one to go for.

Hi Elver - won’t be able to play it for a couple of weeks as the LP12 is off getting an upgrade/service, but when I get it back I’ll give it a spin and let you know.

I have the standard MSFL pressing as well, the UHQR is quite special as quieter, greater soundstage than the other pressings (I have 4 - Reg, Anniversary, MSFL, UHQR), plus a SACD rip and a 2 channel version of the 4.1 Quadraphonic recording (which I have on multi-channel DVD).
Each is different, as is different as each time I play them something in my system has changed, be it cartridge, cables, location etc. 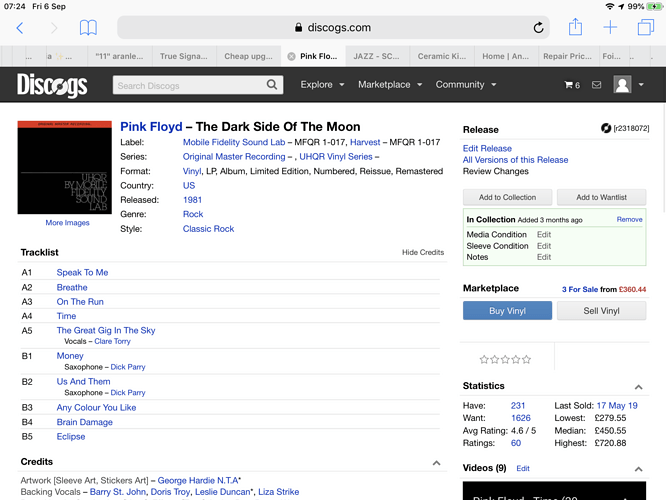 I’ve recently really come round to enjoying the original '79 issue of the MFSL DSOTM. However, it’s only since the RP10 took up residence in the main system. For all that though, I haven’t exactly been doing any kind of extensive comparison recently, so maybe just enjoying it in isolation. I am curious about the UHQR though…

Oh, and with regard to the double Lp of the Division Bell, I bought the 2014 issue but have not opened it yet.

Yes the MFSL is good Richard. It has a refined resolution that I’ve not heard from all the other copies I’ve tried. I’ve never heard the UHQR pressing though. I just can’t get myself to buy an opened used copy, so I’ll just have to bury my head in the sand. The 30th is good, more forward, more punch, but the lack of fine detail, seems to sound like it was made from a copy of the master tape.

I also have the 2014 edition,sounds great to me ,usually find that something can get lost on coloured vinyl,not always,but usually,at the end of the day it’s about the listening experience,not staring at a coloured disc spinning.