The older brackets take all bar the Planar 8 and Planar 10, and there’s a new smaller dedicated bracket just for the Planar 8 and 10. I’m guessing you have an earlier one, in which case it’s probably time to chop it in for the new one.

Thats correct or you could do what i did with mine, when i was used it

I removed the 3 stubs sticking up and then glued a matching piece of wood to it and then pur an additional adjustable shelf on that.
there will be a pic somewhere on the site showing it, but will try and gind the pic 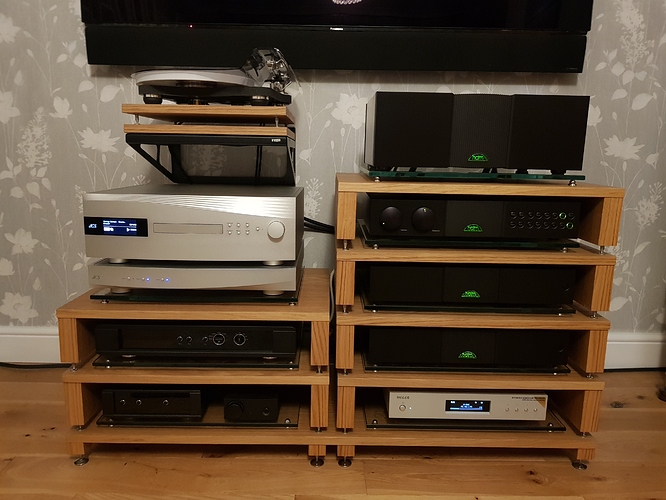 It’s the best pic I could find, hope it shows what I did to make it work while I still needed to use a wall bracket

The whole point of the latest Rega shelves is that they are very low mass. You are probably best just buying the new smaller shelf and drilling more holes. This is one of the reasons I bought a 6 recently, rather than an 8. It’s a bit of a nuisance.

I dont really get the low mass bit off the stand, as once you get past the feet on the rega deck, which decoupled it, dont they? So what does it matter? Plus the low mass bracket is screwed to a solid, very high mass structure, the house, and so becomes part off that structure, as the bracket doesn’t have any decoupling built into it.

The newer style shelf for the older Rega’s inc the current 3, are very light. Just pressed sheet. Rega have definitely gone for minimal mass. When I was handed the box, I genuinely thought it was empty.

Yes i know its minimal mass etc, but as i said above, i dont think its important to how the P8 or P10 work

agreed, i’m pretty sure the P8 shelf is “low mass” because it doesn’t need be heavy since the 8 is so light

nice work, sort of what i had in mind but can’t do a double shelf for space reasons

if i may ask; how did you remove the cups?
hacksaw and a file to smooth it over?
and are the cups just attached with a couple small welds?

Mine didnt have the caps, it was had just posts that go inside the feet, same as the new P8 & P10 bracker, i just drilled out the rivet holding them in.
I did the second shelf, so it made it simple to get the turntable 100% level

ah, ok i get it
2nd shelf would be nice but it’s just below the tv and i’m not about to move
either so i’ll try to level the shelf with some tack

real nice system BTW
hey what kind of wood is that? did you cut to size or do anything to it?

Its oak, i cut it to size and drilled the bits to hold the spikes and pucks. I used a clear Danish oil on it to match the rest