I remember, many years ago, the first time I heard the music of Sly and the Family Stone - it blew my mind. I just loved that group’s fantastic blend of rock and soul music.

More recently, I’ve dug deeper into the music of Curtis Mayfield, especially in the early 70s and thoroughly enjoyed it. I also remember quite some time ago someone (may have been The Kevster) posting in the track of the day thread a superb clip of The Pointer Sisters singing an awesome song called Yes We Can, which, as I was only familiar with their later smooth soul, was a complete surprise to me.

Finally this week, partly as a result of a YouTube clip I watched which recommended this artist and partly as I’ve recently noticed this artist mentioned on this forum, I have discovered the music of Betty Davis. Unbelievably funky! It seems she has an interesting background - briefly married to Miles Davis, friendly with Jimi Hendrix but from around 1979 living a quiet life in Pittsburgh.

Anyway, in the light of the above, I wondered if forum members had some good tips for how to start with a Betty Davis collection (which albums? Vinyl or CD?) and also for recommendations of other similar artists worth investigating.

My favourite Betty Davis albums in no particular order are Betty Davis, Is It Love or Desire aka Crashin’ from Passion, Nasty Gal and They Say I’m Different.

She does have really interesting back story.

There are gazillions of albums I could mention, and it’ll be interesting to see what the rest of the forum come up with, but for heavy funk - which seems to be your preference, I would recommend WAR - and especially the albums The World Is a Ghetto and Platinum Jazz. Really interesting horn section which mixed saxophone and harmonica - and a sound that has never been replicated by any artist.

Not sure if this fits the bill - after 1 minute of sublime guitar intro then POW! this you’ll have you funking around the room.

Thanks John - I remember now, I think you were one of the people who had recently posted about Betty on the WAYLT thread.

Thanks very much @Numptyhead , I’ve just had a listen to a few tracks by War. I really enjoyed them and I’ve put them on my list of bands to investigate.

Andy, just listened to that - very good. The song sounds familiar - is it a Steve Wonder song? I’ve never heard of Stevie Salas. I’ll have to check him out.

I can highly recommend the two Stax of Funk compilations on CD. I made lots of great discoveries thanks to these, especially The Soul Children;

And if you have enjoyed Curtis Mayfield then take a listen to this one his performed by Patti Jo;

Thanks Richard. Both of those tracks are excellent. Those compilations are a good idea, so I’m going to order them. I think it was you who posted on the old forum about a George Duke album, Face The Music, containing the track, The Black Messiah (Part two). It took some time to track it down but I eventually managed to get that album. although edging towards jazz it’s still very funky and I have to say the CD is worth the price just for that track.

@Neil-26 yes indeed it is a Stevie Wonder song and Stevie Salas is just an amazing guitarist - Sass Jordan is on backing vocals and as it’s your thread here’s another tour de force with Stevie Salas on guitar and Sass on vocals.

Thanks. I listened a bit more to Stevie Salas. Some tracks were covers of well known soul and rock/pop songs and very good they were too. 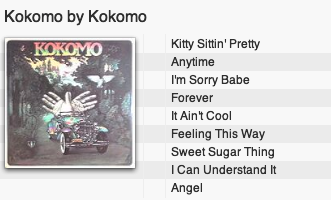 Kokomo were formed from the ashes of the band Arrival who had two major hits in the early 70s with Friends and I Will Survive (not the Gloria Gaynor song). Kokomo were a lot more funky and had some fine musicians such as Mel Collins, sax man from King Crimson.

Thanks TM, I’ll give them all a try.

Didn’t know you were a fan of funky music. The first and third albums are ones of my favorites.

I like lots of different music - my tastes go from Beatles to Wings. If I simply play a numbers game then my favourites are Beatles, Van Der Graaf (Peter Hammill), Fairport Convention, King Crimson, ELP, Deep Purple, Hawkwind, Curved Air and, of course, the Moody Blues. I’ve most of Françoise Hardy & Serge Gainsbourg’s studio work. I like quite a bit of classical music too. If you start a thread on favourite crooners, boy bands or rappers then I won’t be posting as I know nothing about these genres.

You have to remember, I was born in the nifty fifties with a psychedelic dad
Who looked liked Eddie Cochran so the music wasn’t bad.

However, this is a funky thread and when it comes to Psychedelic Funk I like Funkadelic, Isaac Hayes, Parliament, Stevie Wonder, Temptations and Sly & the Family Stone as well as the superb Kokomo. Possibly other artists, but those are the ones I familiar with.

Some of Jess Roden’s work is pretty funky

Brillant singer just wish there was a catalogue re-issue of his solo stuff and The Butts Band as well. Luckily this song is available on the Best of Jess Roden which is still in print.

I’m pretty sure he released a special edition boxset of his work a few years ago. Something like 20 CD’s. (but there is a chance I imagined it

You are right there was a limited edition box set a few years ago by Hidden Masters, I’m thinking it was a 6 CD anthology but I blinked and missed it.