Hi Neil
Yes the 32/5 originally had 328 boards (fitted when purchased new in place the MC boards) which were changed to 328/2’s when serviced (the 328/2 boards are smaller length wise than the originals ) as the marks on the mother board show.

The volume pot was changed and the select switches, not that keen on the new chrome switches, but likely the original style NLA ?
As for the 250 bulb probably just unlucky, but having owned it for nearly 30 years I’ve replaced the bulb numerous times with spares from RS I’ll still have a stash somewhere , also have an LED replacement type of the same size, think it has an on-board resistor but never tried it, need to find it also !
The system has it’s own dedicated radial mains supply from the CU using MK plugs and non switched double gang MK sockets - got fed up of the nasty noises from the fridge and CH switching on/off years ago !

Yes I tend to agree regarding said dealer, AFAIK he’s not had the Naim dealership that long, and in my book experience is everything !

I may consider a new CDP but as it’s only the other half that uses it mainly (after her accident with an expensive AT MC a while back) not planning on spending major bucks…
The updated Marantz CD6006 UK version looks a possibility ? It gets very good reviews.
Forgot to mention I also tried a friends Audiolab CDP but the SQ was still hard/shrill with it also, otherwise it sounded more or less the same as my CD67

Ok, thanks for the info. I will look into this for you.
If it’s not too much trouble, could you upload a picture of the 32-5 with the cover removed?
Don’t worry if not - I’m just intrigued by this!

Photos of my 32/5 . as can been seen on the mother board the marks where the original 328 boards were fitted
The 250 is connected to socket 2 on the Hi-Cap via 4pin din to XLR cable.
HTH 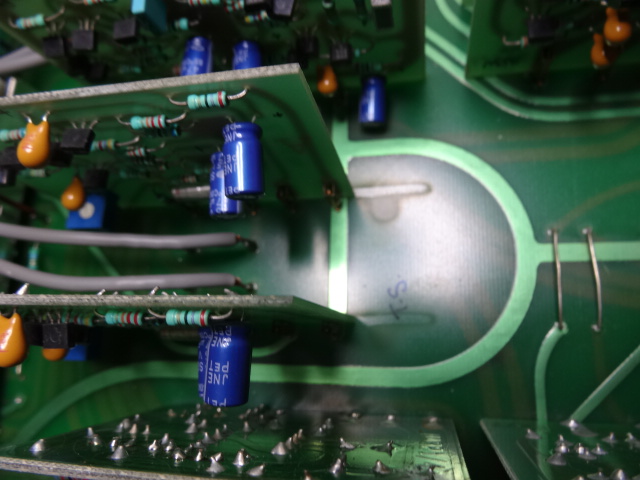 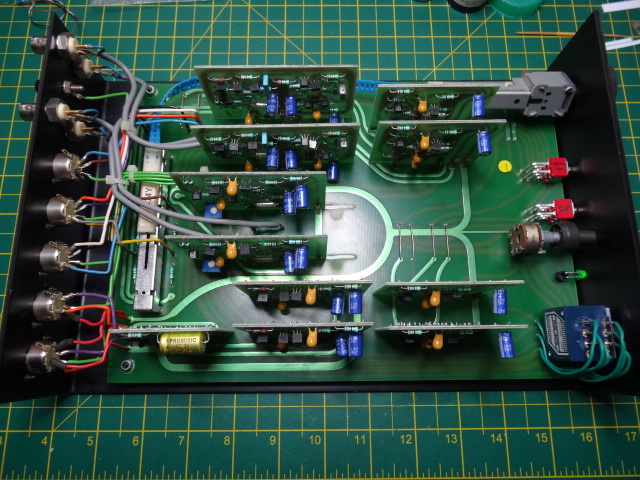 Thanks for the pics.
I’ve checked on this & spoken with the technician who worked on your preamp, he confirms that no boards were replaced during its time here. I did think it would be unusual, especially as we have not stocked NA328 for some time now.
Is it possible that the phono boards & 328s have inadvertently been transposed, so that the two sets of BNCs are now operating in the opposite fashion to which you are used to? In the current configuration the CD should be connected to the innermost set of BNCs.

Hi Neil
Thanks for looking into this for me.
The CDP was definitely used with the innermost BNC input although it’s presently connected via the Tuner input.

The 328 boards were dealer fitted when the 32/5 was purchased new circa 1993 ? and have been in there since untouched, I still have the small box they came in marked NA328. The marks on the mother board would suggest that these boards were longer, or the pin connectors were spaced differently to the presently fitted boards. However if your work colleague confirmed that no boards were changed I won’t dispute that.
However what would be interesting to know when were the revised 328/2 boards first introduced ?
Had CD SQ been as poor as it is now when I first purchased the 32/5 & Hi-Cap new when using the very same CDP no way I would have listened to it all these years.

Aha postie has just delivered my repaired Valhalla board, so it will be interesting to listen to the LP12 with the newly serviced amps.

The 32-5 was discontinued in 1989, however 328s were still available for the 72 long after.
The original box for them wouldn’t have depicted the board revision though. I have found a schematic for them that is dated July 1991, it only says NA328 & the date could be when it was printed for all I know, so it’s not much help unfortunately.
The introduction of the 328 predates my time at Naim, so I’ll need to dig a bit deeper into the history of them. But as far as know, the footprint has always been the same size.
It will be interesting to hear how the LP12 sounds.

Why do visitors always turn up when one’s in the middle of doing something argh !
The Valhalla now works OK but will have to leave re- assembling the deck till tomorrow evening now, no hope ATM with young kids running about !

Once I get vinyl playing, I’ll post some comments on the SQ

Hi Neil
LP12 now up and running, decided to service it when re fitting repaired Valhalla with new oil /springs/bushes and belt.

Vinyl - sounds just brilliant with the serviced amps, far better than before, reminds me of the first time I listened to a friends Naim 12/160 Linn/Naim/Linn system many years ago, where I was shocked by just how “right and musical” it sounded compared to my own at the time boom box so called hifi system…my Naim journey began shortly afterwards…

Only issue now is vinyl SQ makes CD even less listenable, it’s better using the Tuner input than BNC/328 boards but still too harsh on the vocals/top end.

To help restore domestic harmony I decided to purchase a new CDP and hopefully it will improve the SQ. It’s a Marantz CD6006 UK Edition which had excellent reviews and was purchased new at a favourable price. It’s due to arrive tomorrow.

Have you managed to find out anymore regarding the 328 board revisions etc ?

Unfortunately not - I enquired with the last remaining technical boffin who exceeds my time at Naim, he told me what I had already posted above & confirmed that the 328 board size has always been the same. Technical data on early products can be very hard to find, what with changes to our computer systems etc. over the years, many things are lost - we have to rely on pieces of paper & human memories!

Good to hear that the problem is not with the 250 etc.
I’d definitely recommend using one of the DIN inputs for CD, rather than the 328s anyway.
Hopefully a new CDP will fix the issue.

Thanks for prompt reply.
Fingers crossed the new CD player will help sort the SQ issue, else I’ll be getting hit over the head with it …!

Hi Neil
Could you advise what Naim’s current service charges are for CB 32/5 Hi-Cap / 250 amps ?
When I first approached my local dealer in Dec 2019 about getting my amps serviced he quoted (in front of a witness) £270 per box + carriage.
The amps were sent off in early Jan 2020 and returned early in Feb.
However when I went to collect them he commented he had made a mistake and the price should have been £325 per box…although I protested I had no choice but to pay that to get them back.
I’m aware of a recent price rise, but £65 per box seems excessive, I’m also aware there were other cheaper options that I did consider, but decided in the end to send them to Naim.

You’d be better off dropping the tech support guys a line on that one.

OK thanks will do…

I would have thought the dealer is obliged (by consumer law) to stick with the original quote. The arrangement is between you and him, not Naim, so he is liable for any error in the original quote, not Naim. A written quote would have been more bulletproof, but a verbal quote is legally enforceable AFAIK.

Anyway, glad to see you are getting good results with the newly serviced amps. Will be interesting to see how the replacement CD player stacks up.

Thanks for your comments, I’m aware it’s a dealer/customer arrangement but I’d like confirmation of the correct service prices before taking it further if necessary. I’m awaiting a response from Naim tech…
CDP delivery delayed possibly due to heavy snowfall ? Still more time to enjoy the
vinyl …lol…

There is a problem with all the earlier CD players and older amps. Older amps (Naim or other manufacturers - there’s no difference in this) were designed to work with the signals from cartridges, tape decks and tuners; none of these sources produce significant ultrasonic spuriae, so the amps were only designed to deal with the level of ultrasonic noise that is likely to occur through RFI type mechanisms (typically <-80dB ref to line levels). Some early CD players had ultrasonic peaks that were of the order of -20dB (typically breakthrough from the internal clocks) - far more than the amps of the time were designed to deal with, and these out of band signals causes major problems in feedback controlled gain circuits. The 1bit CD players like your Marantz were an attempt to deal with this and reduced the ultrasonics to about -40dB (and typically shifted the first breakthrough fundamental up to >150 khz) - a worthwhile improvement, but still an ultrasonic overload for most of the amps of the period.

Thank you for a very interesting and knowledgeable reply. This may well explain the harshness of the vocals and top end using the older Marantz CD67.

Yes, I think it should be.