I’m curious as to whether I really have got my PLs properly decoupled.

I note @Richard.Dane ‘s helpful FAQ which mentions the need to push firmly twice and that you should notice the back (black) section of the connector push backwards. I’m not really sure if I’ve ever really seen this happen. 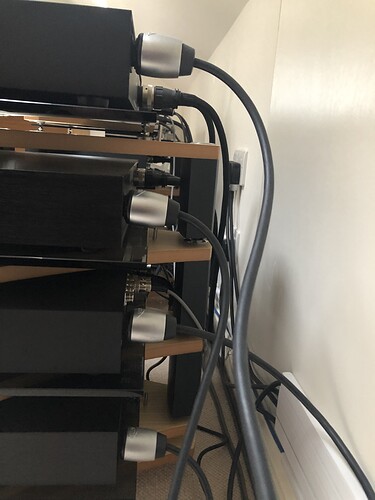 Do they look right?

I tried to see the backwards push, too, but couldn’t really - also because my hand is in the way, due to the position I have to assume in a crowded space. But there are clearly two phases of resistance, a smaller one right when you insert it and push, and another, bigger one if you continue to push a bit harder.

Hold the silver part in your fingers (not the black part), secure the unit from the front to prevent it sliding off, and you should feel both resistance phases. If you push reasonably hard, so that the unit would fall off the front if you didn’t secure it, and it does not go any farther, you should be fine

Thanks. That’s exactly what I do but, as you say, I just don’t ever see the back section of the terminal pushing backwards which is supposed to indicate the opening of the teeth…

Yeah. I did once think that I’d seen a small movement, but unfortunately I can’t give you a clear and helpful description of what you should be seeing.

It looks like there might be a bit more to go on what I take to be the hicap, on the other hand it might be my eyes playing tricks.

I had no resistance in pushing in my Powerline, however it was used. Maybe this is more related to new Powerlines before they are mechanically broken in?

I don’t see anything special in the construction more than that the cable is mounted in a sturdy yet cheap rubber strain relief body which is also the case on the Furutech on the other end. It’s the same kind of gripping connectors as everywhere and nothing that mechanically open and close them if this Naim 3D is correct. When new those claws will most likely have more resistance but when used in/out couple of times the metal claws will not push with the same force as when new meaning you won’t feel the same resistance and the rubber strain relief that is connected to the claw body won’t be pushed back. 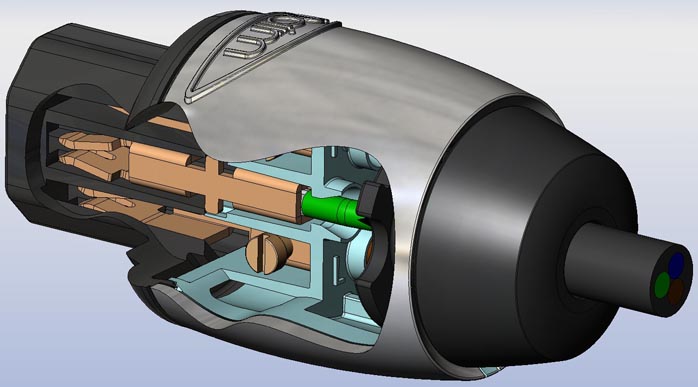 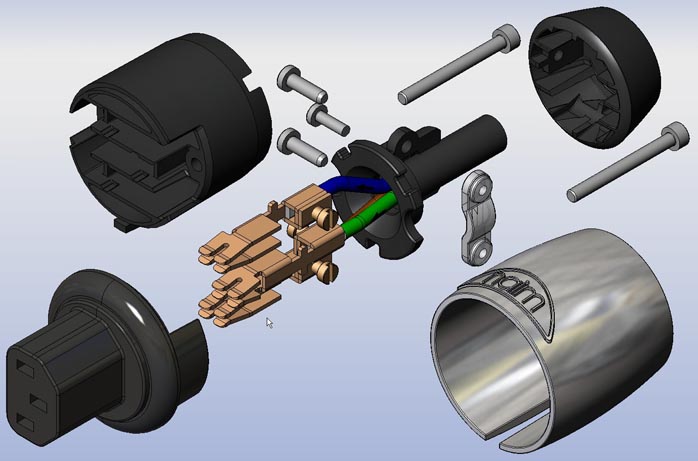 It’s a very different design to the Furutech. For one thing the jaws are as tight as regs allow (and much tighter than other IECs), that way they make the best possible contact with the pins. It means there’s a quite a lot of resistance when you plug in. The other big difference is that when you plug in and the jaws open up on the pins the inner section and rear decouple from the outer plug and reduces microphonic and vibrational effects on performance. This is why the plugging in process is important. You need to push beyond the first big resistance (otherwise the jaws will not be properly clamped onto the socket pins), and only hold the plug by the actual body, thus allowing the rear section to move backwards slightly as it decouples when plugging in.

Looks right? Compared to some other new PC I just evaluated like Furutech and Audioquest my Powerline goes in easy and the others have this feeling of locking onto the pins as you desribe. If I push harder than this I feel my XPSDR will implode

Actually the AQ Z3 has the most snug fit of all cables tested including my used Powerline. It’s a huge difference between brands how they fit on the IEC end. Wire world is really bad for example.

Hard to tell from that picture as I can’t see the whole plug - in particular the rear section.

That doesn’t look right to me. I would try re-connecting it. Make sure you only grip it by the metal part and not the rear black section.

. What specifically are you looking at to confirm it is correctly mounted? I can see a small separation on the bottom part between the rubber and metal housing. Is this the distance that should be visible all around it?

This is exactly my point. I think we all push it in correctly - only hold the metal bit, go beyond the first resistance etc - but I see absolutely no backwards movement of the black section that sits directly behind the silver housing.

This is what confuses me! @Richard.Dane perhaps you could show us a picture of what your correctly inserted housing actually looks like?

Must say I’m utterly bewildered by this. Had a Powerline on my 200 for years. Improvement was and always has been significant. Two dealers have told me over the years that if it’s not in properly usually it will fuse. It never has and I’m certainly not about to touch it.

Accurate assessment. I used to have Wireworld Elektra 7 on my DAC and the connection is loose. When connected, the plug is not perpendicular to the body of the DAC but slanting at an angle. It gives a feeling of insecurity as the plug seems like it’s going to fall off anytime. Having said that, the sound quality is good at its price point and is quite suitable for low powered devices such as the DAC.

I never saw any movement at the back either - it was just a case of inserting it until first resistance and then giving it a damn good shove while holding the front of the box.

I’m Powerline free these days, so that’s one bit of angst eliminated.

Without tearing my own system apart to try to take a picture, I’ll take a look later today to see if I can find a picture somewhere. Otherwise, I’ll take one off my own system and take some photos to show. It’s just the rear black part looks too jammed in to the metal body. The difference is not big visually, but it should be visible. Leave it with me.

Many thanks Richard. If it’s not too much trouble I’m sure a great many on here would find a visual very helpful.

You’re not alone, Dave, I’ve got a number of Powerlines and I’ve used them on a variety of (mostly Naim) boxes. Not once have I been able to detect this ‘point of first resistance’ that Richard refers to. With my other hand braced against the front panel, I push the Powerline in as hard as I dare, holding only the metal bit, and that’s it.

Did you buy new or used? I could imagine used Powerlines not having this tight fit since the metal claws will me widened upon usage and not go back fully to the original tight position.