This is my first post. I am trying to fit a full fat Powerline to my Uniti Nova and it does not fit properly into the mains inlet on the back of the Nova. At first there was no power I moved the metal casing and it worked but the Powerline is not flush to the mains inlet. I installed it my holding the metal case but it does not fully go home. Any ideas would be welcome.

It requires quite a strong push after the first resistance. More can be read here:

How to ensure your Powerline is properly connected Frequently Asked Questions

You need to push until the first major resistance - some stop there thinking it’s in, but it’s not, at least not properly. It then needs a much firmer push to open up the very tight jaws to make a proper grip on the pins. As you do so you’ll see the back part of the plug push backwards. Just be sure you are holding on to the front of the kit because otherwise the force needed will send it flying off the shelf. Also make sure you only handle the outer case of the IEC (i.e. don’t push from the b…

It won’t be flushed when fully inserted which is a common misunderstanding. You’ll see 2-3mm between the IEC connector on the cable housing and the Nova when inserted. 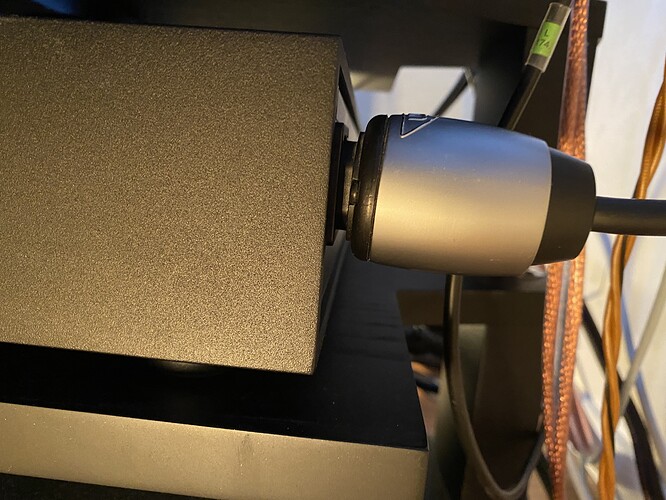 Well, I have been unable to produce that 2-3 mm gap on neither the Nova nor the 250DR. I have tried with as much force as I can muster.

I have no issues with the sound but the weight of the metal sleeve gradually seems to pull the sockets downwards by quite an angle. Will the sockets withstand this significant shear force or do people put some weight supports underneath ?

Don’t get hung up on the numbers. It’s more like 4-5 mm for me on the top side, and mine are definitely inserted correctly. They look like the above photo, where it looks like more than 2-3 as well. If you followed the instructions from the FAQ, you should be fine. Very high force is not required, and maybe it helps to use some force* but also try feeling when the claws open and grip - it’s not so difficult if you try a few times, IMO. Though that might depend on age and health.

As for the weight, the general recommendation is to have all cables freely hanging and not touching anything to minimize vibration transmission, so I think this rules out a support (at least simple ones). I rely on Naim to have considered this, and I have never read a forum post complaining about broken socket, so I guess we will be fine.

* It is enough to push the front of the unit off the shelf, though

Yeah…see my panicked identical post. I had mine all the way on and didn’t realize it. You do feel the slight click or thump as it seats. But it seemed loose still. It was fine.

What you have to remember is that the thing you want holding the two parts together is the clamping of the jaws in the plug to the prongs in the socket. This is one reason why the jaws clamp so tightly (the other being that the tighter the clamping the better the contact). The Powerline tries to avoid the moulded parts from fitting together tightly as this can couple them and transfer any vibration and microphonics

That explains it well. This imparts an image of the casing containing the metal jaws which clamp on to the prongs. Therefore the casing will not be seated as we seemingly expect. (I’ll add I’ve not had a second of regret at the purchase.)

Thanks for this advice. This is how it looks, I don’t regard my age & health as an issue and the connection feels secure. Both sockets move quite a bit with the plug and I suspect that is also by design. I will stop worrying I think but 2-3 mm or more, I am sure it is less. 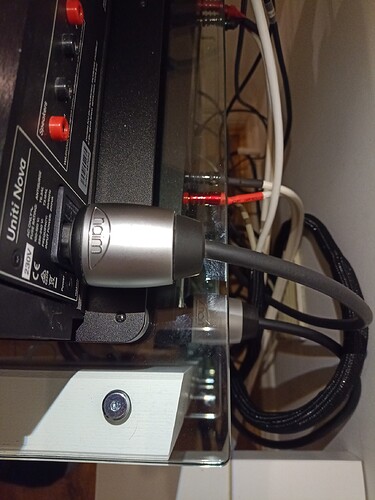 Looks fine to me

Looks fine, congrats, and enjoy. Yes, the sockets move, it’s on purpose and part of the mechanical decoupling.

I added the thing about age because when I give it a push (while holding only the silver housing), I feel a distinct sensation in my fingers of the jaws opening up and the plug gliding in a bit more. This is the important sign of proper fit for myself. But then I remembered that many other members are even less of a spring chicken than I am, and if one has rheumatism, arthritis or whatever, it’s surely much harder. Just trying to be considerate

I’ve never felt that on my second handed Powerlines. You have new ones?

Well that answers a question I have. When you remove the Powerline from the Unit(i) (lol) it would be “bent” to shape so replacing it again onto the unit, the feel would be different, probably much easier to push on also (when pre-used.)

). It’s not a super obvious sensation but I thought quite noticeable after I practiced the plugging a few times with the unit off the rack. You do need to focus on it, hold the silver housing just with the fingertips and only as tightly as necessary, and not use too much force when plugging in as that makes the fingers less sensitive. I start with a little force and increase it slowly just far enough until I get the feeling and it slips in. Maybe it’s just me but I seem to remember @airedog saying this helped him when he had his plugging problem.

All new power cables I’ve had always felt very tight to push in. All used not so much so I’d say no matter design the claws that grips the pins will loose their strength over time due to metal having a “memory”.