Problem with latest version of s/w of Uniti Core - Metadata lookup from Musicbrainz is not working!

I am using Uniti Core from the first day it is released back in 2017.

But over a period of time (in 2 or 3 version down the line) it got solved. And Uniti Core used to extract the Metadata seamlessly till even this year (2021) around April/May timeframe.

After that I have not tried CD ripping for few months. Next when I tried early this month (Sep 2021) I again found the issue Uniti Core had 4 years back.

Metadata lookup from Musicbrainz is not working. I waited for 3-4 weeks hoping that this issue would get resolved automatically. But no luck.

Any Naim professional can please comment on this issue ?

Hi, the Core uses Rovi, and Freedb as well. However if the ripped album is not populated in these databases the Core will not find the data. Often the case on new albums or minor artists….it can take some while. This last week i ripped a cd, i knew it would not be found, so i manually entered the album cover and track info. The alternative is to wait until the databases catch up.

I primarily rely on Musicbrainz as I personally go and setup the metadata for the albums I rip. Also, once I enter the data in Musicbrainz it can be used by my other systems too - Roon, P S Audio CD Player, etc.

It is not a database catch up issue. Previously it used to work seamlessly within an hr I enter the metadata in Musicbrainz.

It seems the actual database is online and delivering data, so it indicates Musicbrainz have an issue on updating their database with new releases. 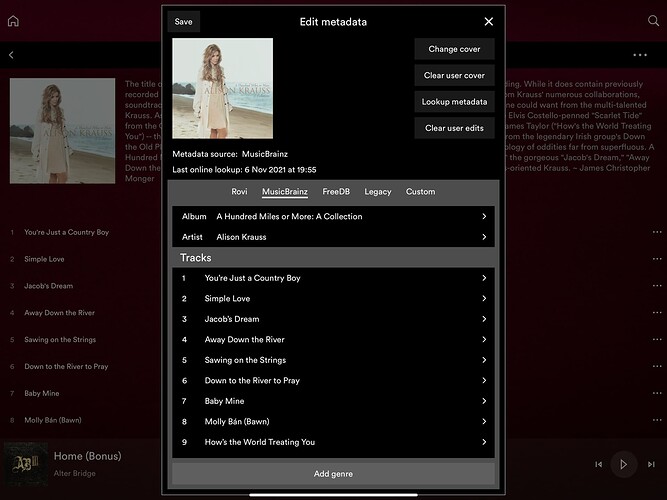 We’ll chase them up as a business and see what the deal is. Examples of missing albums that should exist would be appreciated.

Thanks for the prompt reply.

I doubt that this is a problem at the end of MusicBrainz (I may be wrong though).

So I am guessing it may be problem at Uniti Core’s side.

My old albums, those were ripped before the latest Uniti Core s/w updates, are working perfectly though. Probably for them the data is already fetched and cached in Uniti Core.

I used to face same problem in earlier days of Uniti Core (2017). But that problem got solved within 2 or 3 versions of the s/w update. Looks like it has resurfaced back.

For what it’s worth, I can’t remember the last time my Core got metadata from MusicBrainz. It’s always either Rovi or “unknown album” for months now.

I’ve mostly stopped buying CDs and instead buy downloads because that way at least I know the metadata will work, even though it’s often extremely unhelpful (I don’t need to know who the recording engineer was at all, let alone on every track of an album!).

I sometimes wonder if the steady decline in use of CDs and downloads will bring about the demise of these online databases. With streaming services inevitably making these media obsolete it’s hard to see much incentive for anyone to maintain them in the comprehensive form we have grown used to.

Just last week finished ripping +500 albums on the Core. Everything seemed okay, except for odd albums not recognised. All 3 database’s seemed to be working fine. Just surprising some of the better known albums that are not recognised.

I think Freedb has closed, so the Core uses Rovi and MusicBrainz I believe.

I stand corrected David. I remember now that Freedb returned no information to any rips. Thank you for correcting me. Hopefully, something new maybe in next software update.

For now we keep the view there, as there are systems out there that have cd’s looked up on freedb only and it will break their system if we remove it (the album has meta already from an unsupported source).

This is now my second Core. The first, when originally released, found more commercial releases metadata quite easily. However, more obscure it did not. This time I have found the reverse to be true, for a small amount out of +500.

It’s not unusual for newly released CDs to return no metadata simply because it takes a bit of time for them to be added to the online databases. Perhaps you just need to be patient.

Leave this one with us and we’ll chase it down.

The Uniticore has no cache / built in ‘moment in time’ cd meta db in it, so it all comes from an online instance of Musicbrainz, hosted and managed by Musicbrainz.

Thanks for your feedback, much appreciated.

Just tried fetching metadata from Musicbrainz (I was trying everyday).

So today it has started working again !!!

Thanks a lot for all your help/support. The problem is fixed.

One of my colleagues was sorting it out this week. As you’ve discovered it should be back to normal operation again.