Thinking of buying a projector and looking for some advice. Want to position at the end of the kitchen in a space measuring 13ft x 10ft, photo attached. It’s 13ft from poster wall to back of sofa. Was looking to get a pull up projector that I could place on the poster wall. Questions are
With such a small space what type of projector would you recommend. Do I have to go with UST?
What projectors are out there that are not permanent fixtures, eg pull up that I can hide away when not in use, and good quality.

Max budget is about 4K.

Any advice, bar use a different room, appreciated. 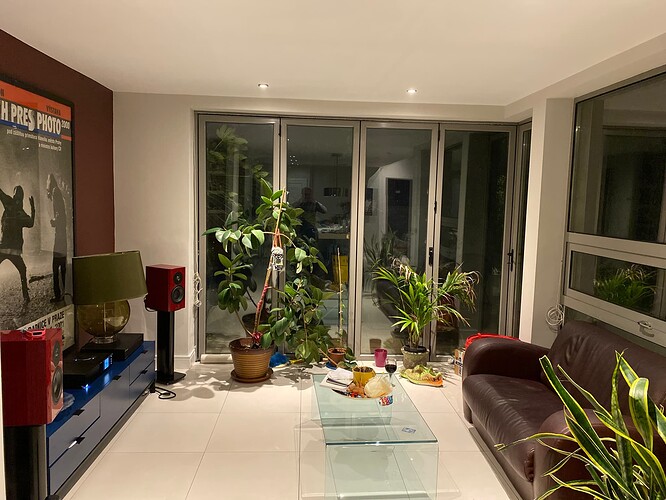 There are short throw projectors that can be a great solution for a small space.

If you haven’t already I’d pose the question on AVForums as this section is alway very quiet. Most of my naim gear is used in my AV system and I’m pretty lonely here

I can’t advise on projectors as I haven’t tried any other than the one I have, and that is a few years old now. However, for what it is worth we find it hugely enjoyable to watch films using it, also some recorded “live music” gigs and in particular streamed operas. In case it helps focus your thoughts, this is what we have:

We use a 12 ft wide screen - nominally 160” (diagonal), which doubles as a blind over the very large window behind. It is completely opaque. Electric screen branded Platinum, about 7 years ago was ridiculously low cost - at under £300 was less than a plain blackout blind from the local blind supplier! We chose the matt grey, which was said to be more tolerant if imperfect blackout, because fulky blacking out the room in daylight wasn’t feasible.

The projector is a Benq W1070. it is only HD, but the big image really is very engrossing. i’m sure 4K would have greater detail given the size of screen, but the cost is a very different. probably when this one dies we’ll consider 4K.

Sitting with eyes about 11ft from the screen gives a wonderful full size cinema feel, infinitely better to us than viewing on a TV, even 84” (though of course an 84” screen from 6ft away would be a similar relative size).

The projector is ceiling mounted slightly behind and over our heads - i.e it works about the same distance away as the image is wide. Because the room is quite a bit deeper, when replacing I’ll be looking for a longer throw lens to put it some distance behind us - the fan noise isn’t intrusive during a film, but after finishing it is very noticeable when it turns off.

I’m on my second projector and can only give advise from my mistakes (many) and victories (few). The budget is enough for a very basic projector. Screens that work well without being in a darken cave cost that much. I’m sorry to be a killjoy but I think the $4k budget is no where close. Plus I see a lot of windows. Now $4k buys a great tv at any size you want. Just think the picture quality will be suspect on a $4k projector and screen, then you will be one of those people who hates projectors. I hope I’m wrong.

I agree with Zackwater that in the space you have, a top end OLED TV is a better option and output the digital output to your Nova. Now, are those delightful little speakers Totem Rainmakers by any chance?

Thanks all for advice. Really useful so reconsidering. The speakers are dynaudio special 40s. Love them.

Agree strongly with advice above - go OLED TV. You will have a much better picture, costs less and will be less intrusive in your space.

One thing I don’t think anyone has noted yet in this thread, is that at least in part the solution depends on what the OP wants from the device. Watching films? Or general TV (including the News, current affairs etc)? Also, what else the room is used for when not watching the desired big-screen. And whether a smaller screen TV exists that he/she might be quite happy with for some uses.

My previous contribution assumed the intention was film watching, akin to going to the cinema - where the room is always darkened, the relative size of screen is large, generally the larger the better, and viewing in that immersive way makes less demand on absolute video quality. I can only speak personally, but I love watching films on a screen that is at least as big as the distance I an from it, and whilst a sharper image such as 4k would give and maybe brighter image as a more powerful projector and higher quality screen would manage, those can wait: I’m happier watching films on my low budget setup (projector and screen under £1.5k in today’s money, receiver/surround amp and secondhand surround speakers probably less than £1k (plus my hifi for stereo channels )) than I would be with a significantly smaller, screen regardless of visual quality.

And there’s no way I want to watch The News or Question Time etc on a huge screen! (Actually that prompts s thought: Do the latest big screen TVs now allow you to instantly shrink image size if desired? If so then it would negate my last observation.)