I thought European Champions Italy failing to qualify for another World Cup was a good place to start a discussion on this years World Cup.

What are your thoughts on the qualifiers, your Countries chances and on wether the tournament should be held in Qatar and played mid season.

I have to confess to having very mixed feelings about this World Cup. Ukraine has shone a spotlight on where money has trumped values and this is definitely one of those cases. Since Qatar awarded this World Cup in 2010, 6500 migrant workers have died = 12/week

I agree it’s difficult and a bit gutting as we easily have the best crop of youngsters in 2 or three generations who are capable of actually winning a World Cup.

I’m not saying that England will win the tournament, but for the first time for many years I’m feeling confident that we are going to be very competitive. The young talent available to Southgate is as plentiful and rich as I think I’ve ever seen it. Sufficient ‘big game mentality’ is the only doubt I have.

Only if it’s a Bazooka Joe!

Do we have any Brazilian posters?

Good group for England but could be a few sticky games.

I’ve got tickets for a Group B game on Nov 29th but think it’s Iran vs USA unless they swap the matches around.

Worse case we watch the England game in a Fan Park or try to grab tickets when we are there.

England in Group B will draw either Wales, Scotland or Ukraine as well as Iran and the USA.

Group E looks the most difficult Spain, Germany, Japan and either Costa Rica or New Zealand. France and Denmark are also drawn together in Group D other than that things look relatively simple for the ‘Big’ teams. 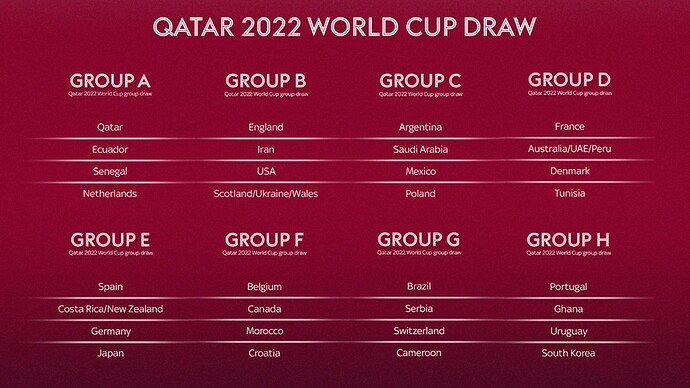 Being an English man living in Scotland I’m hoping Scotland make it through. Beautiful country and lovely people which I’d love to see many friends enjoy a WC.

Is it two from each group go through, or one?

Not sure Ian but thats normally the case Group Stages, Round of 16, Quarter Final, Semi Final and Final.

What are people doing for accommodation when over there please ?

It’s looking about $400 a night for a hotel which is crazy money especially if your there for 5-days.

I was going to stay at a mates in Bahrain but at the moment there are no direct transport links from there to Doha. You can go through Saudi but would need to mess around with Visa’s and driving.

Its coming home - Im already hearing a lot of that in my local amateur football clubs.

I do have significant doubts about some of the motivations and decision making around the arrangements for some of the worlds major sporting events- including this one ( even though I appreciate the desire to promote the game across all continents) and Im struggling a little to get excited about this tournament , of course that may change when it starts.

I think, after the last few weeks of the Premier League, Southgate will have to have a rethink.

All the potential players from Arsenal need to be dropped from the England team as they are clearly mentally devastated at the moment and sadly have a losing mentality.

Whereas you have no problems with the Spurs boys, they are feeling on top of the world…

A lot of players need a good break, same as the rest of us.

I doubt there will be too many shocks but with the season starting early there will be 3 months of Premier League action for players to step up.

Of course I’m biased but Ramsdale, White, Smith-Rowe and Saka injuries aside should all be in the squad.