Hi All,
I’ve just had my Superuniti serviced and am ready to hook it up to hopefully stream from Qobuz.
I have a new synology Nas DS 720+ with 2x4tb. Bubble is installed and when i check sources from the Qobuz mac client I can see the superuniti. When i hit play the play icon starts donutting ie spinning round and no sound., I tried selecting a must and a qb but the same - any ideas would be great. I’ve attached some screenshots. 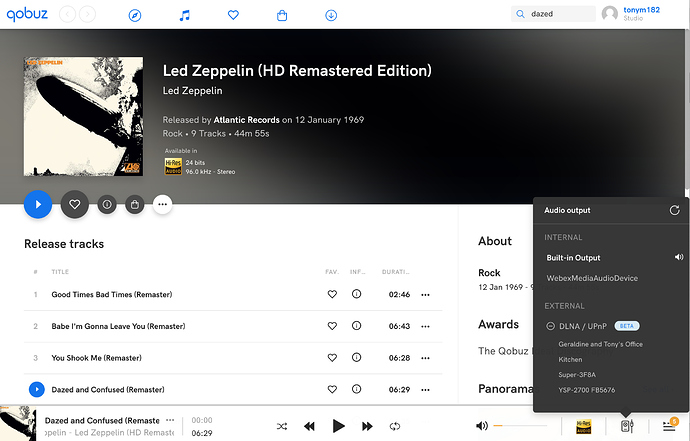 Tony…if I understand correctly you are using the Beta DLNA/UPNP function within Qobuz to try and stream directly to your Superuniti?

I’ve not had much success with that method and get very intermittent results. Given you have BubbleUPnP server installed you could use another control app such as Linn Kazoo or Lumin to stream Qobuz to your Superuniti

I believe that DLNA/UPNP function has been in Beta for a number of years, so it’s probably no longer under development. Shame as I like the Qobuz interface on my Mac but Linn Kazoo does a good job

Has anyone found a solution to this issue? I trialed Qobuz a while back and really like the user interface on the Mac and also on the iPad. But I also could not get the UpNP feature to work with my SuperUniti. I’m thinking of subbing to Qobuz but only if I can use their user interface on my iPad. I know I could use other apps but I’ve not found any others that have the same user interface except maybe Roon. But not in a position at the moment to pay that much for it.

Mconnect works on an iPad I believe and can stream Qobuz over WiFi.

If you want to use the Qobuz app I’m not aware of any way to send the stream to a Naim streamer except for adding an Airport Express or Chromecast Audio via optical and casting to that. Not the best sound quality option, but the better options that proxy it to a UPnP server need a different control app.

Thanks both for the reply. Yeah I kind of feared there isn’t a way to do what I want without going with a third party app and loosing the nice interface or using Airplay and loosing the sound quality. My thought was exactly to use Qobuz to browse and add albums to favourites, then to use iPeng to play them on my innuos Zen to the SuperUniti.